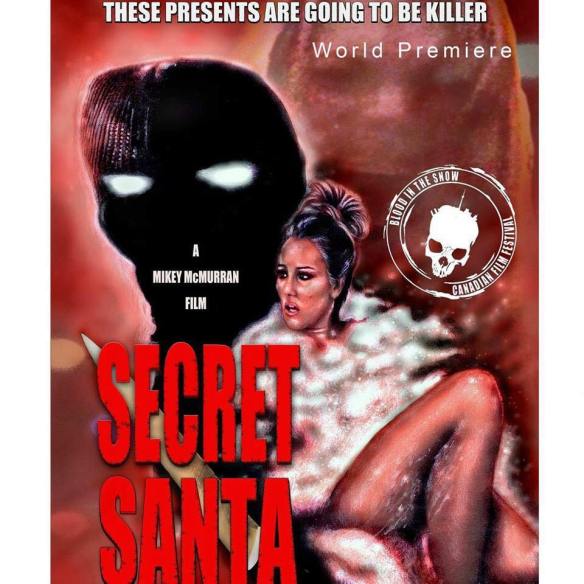 Firstly I’d just like to say thank you to Reel Phobia Productions and Writer/Director, Mike McMurran for allowing me access to an online screener of his debut feature-length film, “Secret Santa”. Secret Santa is an 80’s inspired, Christmas themed, Horror/Slasher film about a group of college students who throw a small impromptu party to celebrate the holiday season. Olivia (played by the lovely Nicole Kawalez, in her first appearance) organizes a fun exchange of presents among the friends but the findings are quite puzzling and lead the group to believe someone out there has their own nasty agenda. The film also stars Annette Wozniak (of Chad Archibald’s “Bite”), Keegan Chambers, Geoff Almond, Brent Baird, Tony Nash and Matthew Chisholm. I didn’t intend on reviewing a series of Christmas Horror movies seeing as though it’s not Christmas but it seems I’ve got my hands on a few lately, so I thought why not? I remember hearing a few things about McMurran’s, Secret Santa from the boys on YouTube at “Bloodbath and Beyond”, so here goes nothing.

I’ll be the first to admit, it doesn’t take a lot to get me interested in this kind of film. A lot of movie-goers and critics are a little more selective about what they watch but me, the promise of a masked killer, interesting albeit cliché’ characters and plenty of kills is really all I want from the Slasher sub-genre. Secret Santa while set in present day, is still a clear-cut throwback to the slashers of the 80’s. Films like “Black Christmas” and “Christmas Evil” are just a couple of the countless holiday themed entries inspiring this. McMurran’s method toward his visuals is an obvious nod to the SOV (shot on video) era of film making. The static and spotty style of Secret Santa will remind you of an old bootleg V/H/S tape, the only difference being that this film was clearly shot with good equipment (unlike years gone by). The color grading is really vibrant and in a way probably negates the desired effect that someone like Richard Mogg goes for in his films (Massage Parlor Of Death and Bigfoot Ate My Boyfriend). Maybe it’s just that Mike is like me and enjoys the best of both worlds, plus with a first film it’s important to have as high of a production value as possible. Secret Santa employs some ADR here and there (additional dialogue recording) but all the audio levels are nice and clear. A similar thing can be said for the foley, particularly the sounds of some of the weapons as they’re being tested out.

The soundtrack isn’t anything special but what would an 80’s style Slasher be without the complementary synth? Most of it sounds alright and some of the heightened zany synth noises, combined with the smooth editing, really help convey the intended tone. The best technical aspect here is certainly the cinematography, McMurran is extremely proficient in giving audiences plenty of variety. Secret Santa begins with some really gentle panning and later, there’s a lot of effective focus shots that really drive the high production value. This is one of the first times I’ve seen a low-budget filmmaker refrain from going handheld and jerky during its action sequences. There’s a real attention to detail in keeping Secret Santa looking professional, a nice little nod to Bob Clark’s “Black Christmas” is the only obvious tip of the hat. We see several POV shots of someone peering through the windows of the house (straight out of the aforementioned film). All of the framing is solid and I particularly like the deep focus shots on the masked killer, as he or she is wrapping presents for the group. The film has its comedic moments dispersed amidst all the carnage, some of the lines working better than others. The five or six core characters aren’t exactly well-rounded in terms of their arcs but I respect McMurran’s simple approach with presenting each of them as a stereotype of Horror 101, e.g, the jock, the stoner, the princess, the slut and the final girl.

The group of young adults decide to have a little celebration for the end of the college year. Naive, Nicole (played by Wozniak, a dead ringer for Amber Tamblyn), straight-laced Olivia (Kawalez) and promiscuous Carissa (Chambers) all share the house that the party takes place in. Nicole presents herself as quite innocent, yet her interesting after school activity and dynamics of relationship with boyfriend, Bryan (Brent Baird) prove otherwise. Olivia’s been keeping a secret from her friends and chooses the night of the party to reveal it, then there’s Carissa, the wild one who seems to get caught up in everybody else’s drama. Fifth wheeling it is student slacker and hyper-active, Dwayne (played by a bald Geoff Almond). Almond reminds me a lot of “3rd Rock From The Sun’s”, French Stewart. Dwayne does the least amount of work to get by but he’s got a convenient drug habit helping him cram for exams. Much to my surprise, Secret Santa had very consistent acting given the rather inexperienced cast. All three of our lead girls are gorgeous and they hit all the right notes for the intended tone. My favourite being Keegan Chambers, who rocks a pair of denim shorts with stockings that scream all kinds of sexy. As I said, Annette is a dead ringer for Amber Tamblyn and she definitely gets the most out of her comedic timing. Baird does a pretty good job in his role as Bryan and Almond’s mostly there for comedic relief. His shining moment is a scene that involves an awkward conversation with the Carissa character.

Let’s get to the good stuff now, Shall we? You want to know what Secret Santa offers in the killing department don’t you? McMurran takes the old school approach we all know and love, with everything being done with practical blood and gore effects and it’s nothing if not ambitious with the execution. The opening kill comes less than five minutes into proceedings and believe me, it’s quite a violent one. There’s a couple of potential stand outs for the best kill, one utilizes a nice neck piece and the other involves a weapon no one bargained on getting used. Even with a handful of routine kills (probably due to budget limitations), McMurran still gives the audience consistent blood flow at every opportunity, especially toward the ending. A couple of sequences, specifically one in a bathroom, make a hell of a lot of mess. I was actually surprised by the ending of this one and the revelations that come with it. Up until that point I had noted a few plot holes here and there (or what I thought were plot holes) but I was glad to be proven wrong once the film came full circle.

There’s a couple of minor technical glitches in Secret Santa which are quite common in most independent and low-budget films. The audio in the very opening scene between Carissa and one of her other housemates was slightly out of sync. With this being a throwback to 80’s slashers (in which out of sync audio was often done deliberately), you can’t be completely sure that it wasn’t the intention, although if that was the case it probably would have remained that way for the entire duration of the film. An unnecessarily lame visual effect is used during a conversation between Dwayne and Nicole, in order to depict Dwayne’s drug related trip. A handful of scenes inside the house during the first act are really quiet and have no atmosphere due to the lack of score. A majority of the film is scored pretty well but those scenes definitely required some form of music because there’s not even any room noise, everything’s just dead. There’s only one or two small continuity issues, the main one during an interaction between Carissa and Olivia. There’s a knock at the door while the two are finishing up a conversation, Carissa can’t be bothered getting up so she screams out to Olivia to get the door but she’s just been in the same room. In the next frame Olivia is seen approaching the door as though she’s come from a different room. The other issue is surrounding the killer/s movements around what is a pretty small house and being able to sneak around it undetected. I’m not going to get hung up on that though because slasher films have always operated under similar flawed guidelines.

Tony Nash who plays Professor Ramsey, was the only person I felt was perhaps a little miscast in terms of looking the part. Nash seems quite young and unlikely to be a professor but that’s not to say he doesn’t do a decent job in the role. The weakest specific in McMurran’s screenplay is the motive behind the series of killings. Once again though, Secret Santa being what it is (a throwback to old school slashers), it may just be Mike’s take on the nonsensical motives killers in these types of films often have, after all, he makes no apologies for coming at sections of this film with a comedic approach (spoiler: all the sex toys would tell you that haha). My personal preference would have been a legitimate and believable motive but hey, each to their own. Being a small cast with minimal locations type of deal, there’s a bit of a lull for twenty minutes or so where the inclusion of a couple more kills would have been a great addition. That being said, I understand most of those creative decisions come down to whether there’s enough funding and enough time.

Secret Santa is a sharp and snappy, 75 minute feature-length debut from Writer/Director, Mike McMurran. The script is equal parts slasher film and teen comedy (relatively speaking) and it hits mostly the right notes. It reminded me of films like Todd Nunes, “All Through The House” and Michael Hall’s, “Kids Get Dead 2: Kids Get Deader”, with just a touch of “Porky’s” added to the mix. The audio levels and foley are bright, as is the color grading. The sincere attempt to make this aesthetically comparable with an 80’s bootleg V/H/S is fun but probably lost on most if you don’t get the intention. The impressive cinematography is definitely the focal point and some of the best work I’ve seen (if not the best), given the budget. There’s enough fresh perspective there while still winking at slasher’s from the 80’s era, particularly “Black Christmas”. The characters all make for a fun watch (lovely eye candy aside) and the standard of acting was refreshing for a genre that often sees most phoning it in. I commend Mike on delivering plenty of blood and gore for the hardcore fans and a couple of really memorable kills, even with the limited funds. I definitely had to reach in order to find a handful of fairly nit picky issues, so other than that dubious motive and me wanting to see even more killing than I got, slasher fans will find it hard to fault Secret Santa. This is the best holiday themed movie I’ve seen this year and Producers/Investors out there would be wise to back the next film from Mike McMurran. Money is the only thing stopping this guy from making a name for himself in the Horror genre, so keep an eye out for Secret Santa this December!