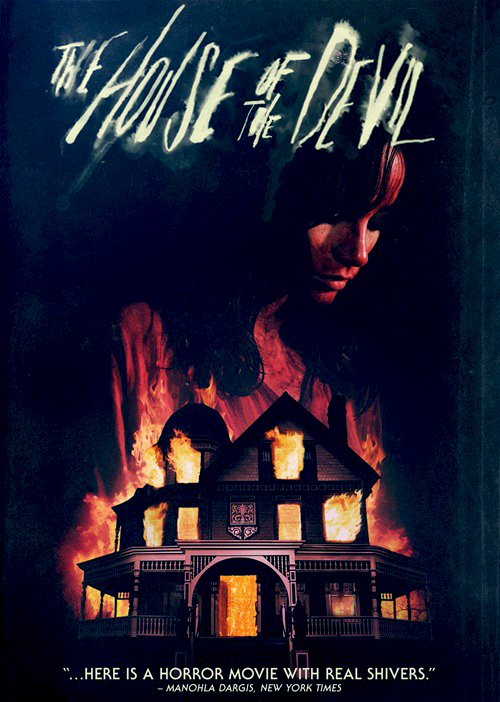 THE HOUSE OF THE DEVIL

This is a review for the 2009 Horror film, “The House Of The Devil”, Written and Directed by Ti West (Cabin Fever 2 and The Sacrament). It’s 1983 and financially challenged college student, Samantha Hughes (played by Jocelin Donahue of “Insidious: Chapter Two”) decides to take a babysitting job under mysterious circumstances. On the cusp of a full lunar eclipse and inside the Victorian manor, she quickly realizes that not all is as it seems in the Ulman household. The film also stars Tom Noonan (from TV’s “Hell On Wheels”), Mary Woronov (Silent Night, Bloody Night), Greta Gerwig (Arthur), AJ Bowen (You’re Next) and the infamous, Dee Wallace (E.T). Prior to this, West had only made a couple of short films, along with a couple of his lesser known features, “Trigger Man” and “The Roost”. The first film of Ti’s that I saw was Cabin Fever 2: Spring Fever, the sequel to Eli Roth’s hard-hitting horror film about a flesh-eating bacteria. I’ll admit that aside from some decent practical effects and a couple of funny moments, I loathed that sequel. It was a weak screenplay for a follow-up film that we just didn’t need (the original is great). I heard of a couple of Ti’s other films not long after I saw him in a brief role in Adam Wingard and Simon Barrett’s home invasion film, “You’re Next”. I purchased House Of The Devil about five years ago and finally got around to watching it! 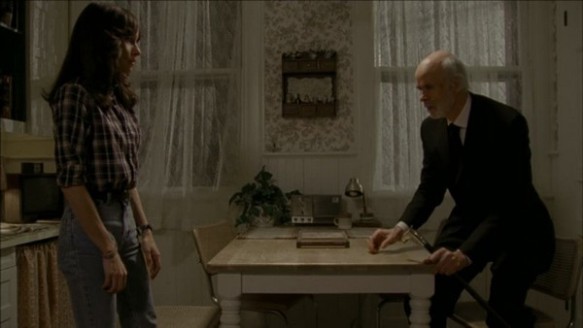 It’s clear from the outset that West’s, House Of The Devil is visually inspired by genre films of the 70’s and 80’s but even more so by the likes of, Alfred Hitchcock (Psycho), Stanley Kubrick (The Shining) and Roman Polanski (Rosemary’s Baby and Repulsion). Ti fully commits to the 80’s aesthetic here, his eye and attention to detail are as sharp as anybody working in the genre. There’s a great freeze frame when the opening title is displayed and the end credits play out over one singular shot (both techniques that were commonly used in that period of time, A Clockwork Orange if memory serves me correct). This film was shot on 16mm and color graded to emulate some of those films I mentioned earlier, the estimated budget was just under a million dollars. The cinematography is unbelievably sharp and the variation of shot choices give this a higher production value than you might think. A majority of the run time takes place inside the house but due to the tension created through the lens, it never feels boring, even with its slow approach. There aren’t a lot of still shots, the camera is always gently focusing and panning and I love that shooting style. Tone-wise you can’t help but be reminded of certain classic 70’s slasher films such as “Black Christmas” and to a greater extent, John Carpenter’s “Halloween”. There’s even a knife wielding sequence that’s shot extremely effectively, as Sam creeps down the hallway and knocks on one of the doors. 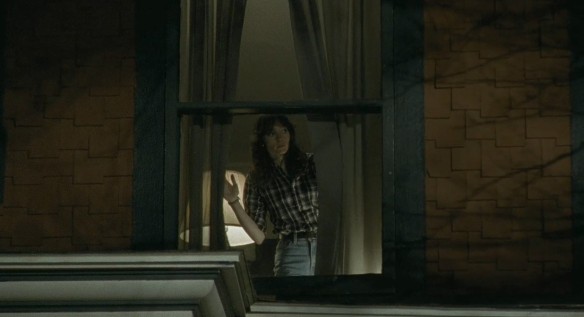 The audio levels are nice and consistent and the sound design, through good foley, helps maintain the tension that’s built within the first hour. The lighting is another standout feature in this one. In terms of the color palette the film stars out quite warm but as Sam’s situation escalates, it all darkens accordingly. Some of the highlights lighting wise, are a sequence where Sam goes into the bathroom to investigate and another where she makes her way up the staircase to look around. There’s fragments of light shining through the slats on the staircase and it’s a very subtle sequence. The wardrobe and set design are quintessentially 80’s, as you’d expect with it being a period piece. Sam’s always got her walkman playing (pumping out 80’s retro tunage) and along with her best friend Megan (played by Gerwig), pull on the faded denim jeans, flannelette button up shirts and wool sweaters to get into the swing of things. Everything inside the Ulman’s home looks old, older than the 80’s which should tell you something. The heavy pattern designs are reminiscent of rooms in The Shining and the couple themselves are quite strange to say the least. Ti’s approach to the soundtrack is an interesting one. Usually with films set in the 80’s, the complementary synth is just a given and while that’s ever-present here, there’s also some great songs by Grazer and The Fixx. It’s a fusion mixed score when things amp up and the use of synth and bass is what gives it that Carpenter esq feel, I really dug it. 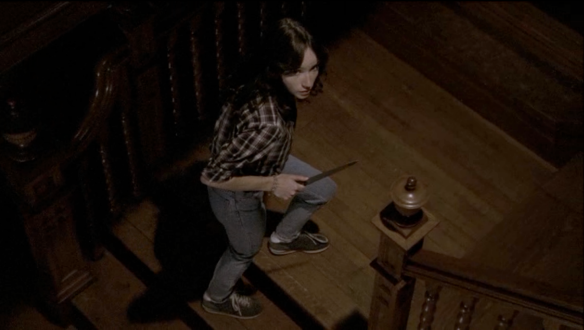 Storywise, The House Of The Devil is all about its build up and there’s not a great deal of action until toward the end. Now that’s not to say the payoff isn’t there but there’s no doubting it’s quite a wait (even a little slow for me). The first act sees the viewer getting to know a little bit about Samantha and her plight, as well as the dynamics of her relationships with her roommate, plus her best friend, Megan. The second act is our introduction to Mr and Mrs Ulman, an elderly couple (played by Noonan and Woronov) who’ve been desperate to get a babysitter so they can have just one night to themselves. Shortly after arriving, Sam finds out that Mr Ulman hasn’t been entirely honest with her about the specifics of the job. I won’t spoil any of the revelations from that point on but needless to say, it becomes a very tense situation for our heroine. The cast all turn in solid performances, particularly Donahue and Noonan. Their two characters share a conversation in the kitchen upon first meeting and it’s executed effortlessly. It was interesting to hear Ti West talk about the look of this cast and how they all personify that “classic horror” appearance which is what he wanted. Jocelin has that “Laurie Strode” (Halloween) look about her, Greta looks like the classic best friend and Noonan is that larger than life man shrouded in mystery. Both of our female leads are incredibly likeable (as are their characters). Donahue carries a large chunk of this film on her own and she does so admirably. As the action picks up during the climax, there’s also some really great practical blood and gore effects. 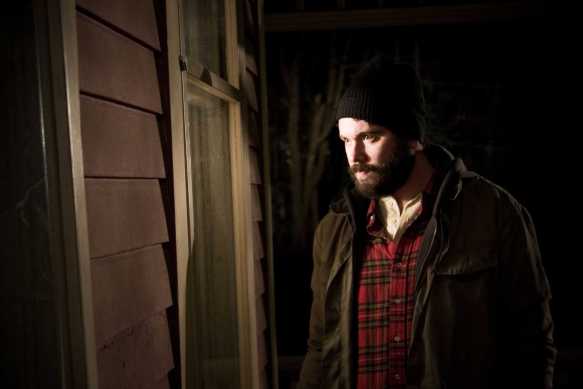 The only lapse in the acting came from Mary Woronov’s when her character has contact with Sam toward the end of the film. An exaggerated response to a certain action is the only thing that was sub-par (those of you who’ve seen it will know the scene). There’s the usual continuity problems (or stretch of plausibility) in some of Sam’s actions early in the film. It’s quite clear that she has her own trust issues (perhaps a little bit of paranoia), yet after Mr Ulman withholds important information about the job, she’s still willing to do it. I understand that money talks but Ulman doesn’t help his case by saying “we can’t pay your friend” (meaning Megan whose with her) but then follows up with a “we can pay you extra”…. well you either have it or you don’t, right? Obviously without Sam agreeing to babysit we don’t have a movie so yeah I can let that one slide a little… There’s a couple of other plot points that I found difficult to swallow, mainly because they could only occur due to decisions made by Sam. There’s an ongoing issue with the pizza in the town, Megan gets a slice or two early in the film and complains about how average it is. During Sam’s night of babysitting she also orders a pizza and everything that follows on from that, only occurs because she orders said pizza. I would have preferred a different approach to that whole scene, e.g, Mr Ulman has pizza already in the fridge and tells Sam to help herself and that way what follows isn’t so typical. There appears to be a room upstairs that’s locked, eventually we get a glimpse inside but I’m not sure (given the ending) why we needed to be shown that because it’s never really addressed again. The major let down of the film for me occurs during a scene in a graveyard, I’m assuming it’s only there to set up the closing shots and final twist but that’s a highly unlikely situation to be withstood by someone. 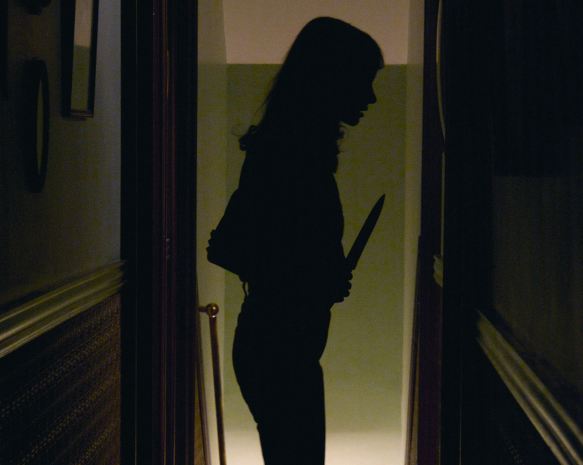 Ti West’s, The House Of The Devil is an immensely atmospheric and slow burn horror film that pays homage to its 70’s and 80’s counterparts. The screenplay is tension filled and the approach to the “cult like” sub-genre, reminds me of what Mickey Keating (Darling and Carnage Park) is trying to do for modern Horror. The camera work is exceptional, the shot choices exquisite and the sound design crisp. I love the 16mm shooting style and some of the stylistic editing, the lighting and score are what make this one of the most unnerving films of the last decade or so. The attention to detail is clear in every aspect of the film, all the way down to the casting and the really solid performances by all. Topping it all off are some gruesome practical effects, which add a nice touch. It’s really only the small continuity issues and a handful of convenient plot details that curb West’s film somewhat. After my experience with The House Of The Devil, I’m looking forward to watching Ti’s other films “The Innkeepers” and “The Sacrament”. If you prefer much slower pacing and mood based films over the visceral carnage of a conventional “slasher” film, look no further than The House Of The Devil.