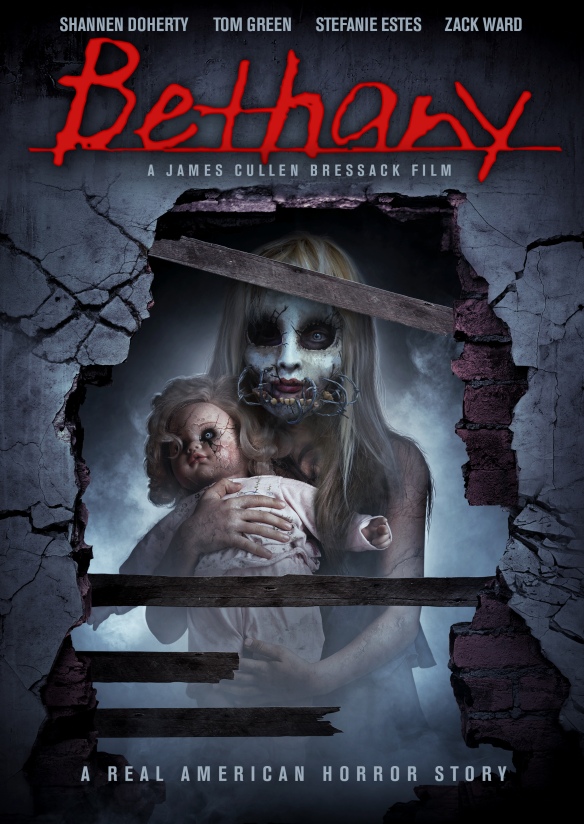 Firstly, I’d just like to start off by saying thank you to both Uncork’d Entertainment and Co-Writer/Director, James Cullen Bressack (Pernicious and Hate Crime) for allowing me early access to an online screener of the Horror/Thriller film, “Bethany”. Bethany centers around Claire (played by Stefanie Estes of “The Bunnyman Massacre”) *see review* https://adamthemoviegod.com/the-bunnyman-massacre-review/, a fragile woman suffering from past childhood trauma at the hands of her mother, Susan (Shannen Doherty of TV’s, Charmed). Claire finds the situation compounding even further when her and her husband, Aaron (Zack Ward from “Dark House” and “Don’t Blink”) move back into her childhood home. As job security begins to look up for Aaron, Claire’s past and present become one, as she attempts to find out who or what the mysterious figure is that haunts her. The film also stars Tom Green (Freddy Got Fingered), Anna Harr (Restoration), Leon Russom and Felissa Rose. I thoroughly enjoyed the last of Bressack’s films that I saw, Pernicious *see review* https://adamthemoviegod.com/pernicious-review/ and he continues to notch up credits in Writing/Directing and Producing, while at the same time building quite a rapport with those in the industry. Paranormal entries aren’t necessarily always high on my priority list but I like to support young up and coming filmmakers like James so here we are. 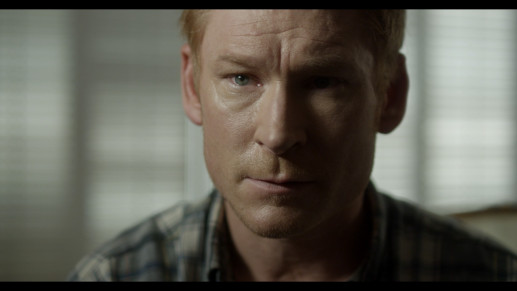 It’s clear from the outset that Bethany has a relatively high production value. There’s a lot of nice diverse shot choices and all the framing is consistent. This isn’t quite as cinematic with wide shots or the use of a dolly as some of Bressack’s previous work, but that could simply be down to equipment or perhaps even the fact that the subject matter is a little darker, I don’t know. A majority of the lighting is fairly effective as is Alex Csillag’s score. The soundtrack utilizes orchestral orientated themes and a lot of classical piano but it sounds definitive. The script was penned by Bressack, along with Ward, who previously wrote “Restoration” and was involved with “Blood Lake” (another of James films). While Bethany often treads over routine ground seen in countless other paranormal based chillers, this particular duo are able to inject some productive elements into the stories specifics. The film is actually much more about Claire’s own personal fears and demons than paranormal occurrences, which is both a good and a bad thing depending on your expectations and personal preference. The film opens with a sequence from Claire’s childhood (which will become evident when you see the scene that follows) and it gives the viewer initial insight into the type of environment this little girl has been brought up in. The way in which cinematographer John DeFazio shoots Susan as this larger than life presence, is great. She stands carefully silhouetted in the shadows of the doorway overlooking Claire, which helps to convey some good ole’ fashioned suspense early into proceedings. These days flashbacks are almost essential in the world of the paranormal and Bethany is no exception to the rule. It’s a crucial part of the narrative here but it’s nicely presented and doesn’t jolt you out of present day like a lot of these films do, they’re brief but informative pieces of the puzzle instead. 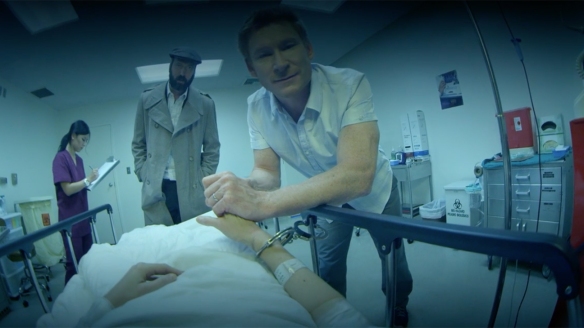 Bressack’s casting choices for Bethany were very interesting and for the first time in a long time, I witnessed not one, but two players stepping well outside the confines of their safe place. It’s Doherty and Green that I speak of. I’ve long been a fan of Shannen’s, even met her on a couple of occasions. She was delightful, down to earth and engaging, and in light of recent events I’d like to take a second to wish her all the love and best wishes in the world as she fights the most personal of health battles, we’re all pulling for you! Doherty really gets to lash out by playing the domineering head of the household and she does a fine job of it. Then there’s Green (oh how people continue to ridicule me to this day for my guilty pleasure love of Freddy Got Fingered, haha). Kudos go to Bressack for bringing Tom on board this project. He doesn’t feature a great deal but when he does he comes across as natural and believable as psychologist, Dr Brown. Both Zach and Stefanie work well enough together, though neither have any real stand out moments, and young Anna Harr is serviceable too. There’s an array of visual effects shots featured in Bethany, some executed better than others. The mysterious figure that appears in the last act looks as though it’s been pulled from the same universe that gave us Samara (the girl from The Ring) which is not necessarily a bad thing, just something that you’ve probably seen before is all. On the upside, there’s a highlight that involves a finger nail and it’s bound to make you wince in response. Bressack also showcases his love for the red stuff, with a decent amount of blood on show for a movie of this nature. 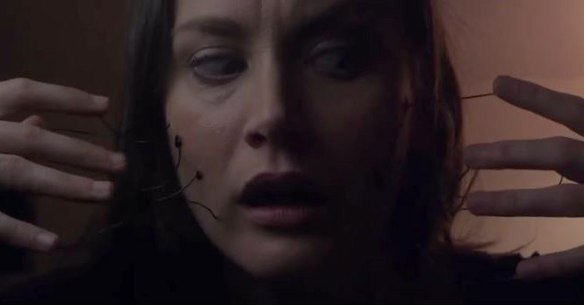 There’s nothing obvious to get hung up on with Bethany. There’s the odd technical inconsistency or in my case, differing of opinion based around some of the specifics. I found the sound cues were a little bit too loud in the mix (probably intended though in order to build tension) and the incessant piano score does become a little tiresome when it’s included from scene to scene. The color grading was fairly washed out at the beginning during the graveyard sequence and I would’ve preferred a slightly different look but that’s just me. The same goes in regard to the lighting for those overly dark sequences when Claire is navigating the walls and basement of the house. A couple of sections of dialogue just felt like filler, especially the interaction at the table between Dr Brown and Aaron. Claire is busy preparing food and dealing with hallucinations and the two men are talking about Canadians and their mannerisms and idiosyncrasies and it sort of felt out-of-place. At times the film is bogged down with sluggish pacing too. For example, it seems as though drama ensues pretty quickly between Aaron and Claire before they’ve even really spent a day in the house, although I suppose we’re led to believe they’ve had problems for a while before this. Then there’s the obligatory “Is she really experiencing this haunting or is it all in her head” portion of the film, complete with “husband who thinks she’s losing her mind” plot point. My problem with Bethany is the same as it was with my most recent review for “Ghosts Of Darkness” *see review* https://adamthemoviegod.com/ghosts-of-darkness-review-2/ it’s simply just more of the same. Much the same as the conventional slasher (or any sub-genre for that matter), more of the same has never been a real problem, if you love these types of films that is. I take some issue with the marketing and the fact that Doherty and Green get top billing (considering they probably only share 10 minutes screen time total between the two of them) and like I said, in the end the film is far more a psychological deconstruction about self-worth than it is a scare based horror film. 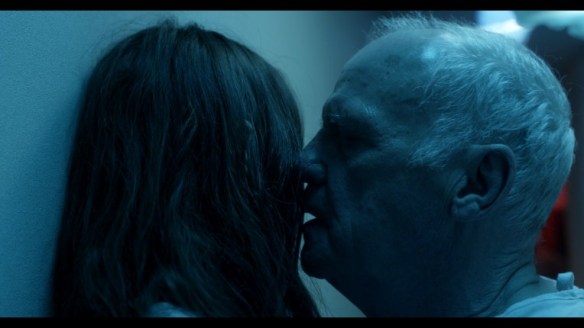 Bethany feels like a cross between something like “Stir Of Echoes” and Nicholas McCarthy’s superb film, “The Pact”. Bressack continues to grow as a Writer/Director and I think he’s definitely found his niche in Horror. The cinematography, lighting and score are all pretty well conceived. James and Zach combine nicely and are able to breathe a couple of different elements into what would otherwise be a totally stock standard carbon copy. Instead, the flashbacks work a treat (better than most) and some of the sequences gauge some solid tension through atmospheric lighting and sound. The casting is where the film is its strongest. Each of the performances are relatively even and it’s great to see Doherty and Green doing something so far removed from what audiences have come to expect from them. Some of the visuals though not that original, still work well and I always appreciate a blood flow where it would normally be lacking. From a technical point of view I can’t complain because my gripes are down to personal preferences. The only thing with Bethany is that it’s all very conventional and predictable in regard to its revelations. This universe is just about out of new ground to cover and unfortunately due to some false marketing (even if unintentionally) and a lack of scares, it makes it difficult to recommend this over any number of the straight to VOD thrillers.