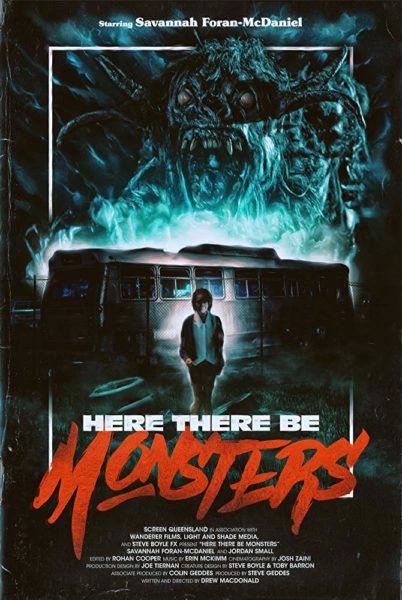 HERE THERE BE MONSTERS

Firstly, I’d just like to say thank you to Wanderer Films and Writer/Director, Drew Macdonald (Creeper) for allowing me early access to an online screener of his 14-minute Horror/Thriller short “Here There Be Monsters”. Here There Be Monsters is an Australian made film about a timid and tormented school girl named Elki (played sublimely by Savannah Foran McDaniel), who falls asleep during the bus ride home and awakens to find herself at the end of the line where something lurks in the shadows of the depot. The film also stars Jordan Small and Toby Barron as “The Monster”.

Some of you die-hard MovieGod readers (if such a person exists haha) might remember me reviewing Macdonald’s previous short film “Creeper”, a genuinely disturbing slow-burn Mystery/Thriller, that was, in fact, the best short of 2017 *see review* https://adamthemoviegod.com/creeper-review/. Well, I’m pleased to see Drew right back at it again with another outstanding homegrown piece of work. The film, whilst fictional in nature, broaches some of the current societal issues we’re having with bullying in our schools and the detrimental effects on the victims of that bullying. Young Elki is just minding her own business on the bus home from school and is yet subjected to a barrage of physical and mental abuse from fellow teen classmate Noelle (Small). Sadly Macdonald showcases the worst of adolescent behavior, and what’s more disturbing is that it’s true to form. This is happening to youths everywhere and it shows the dangers of what can transpire if others idly stand by and do nothing. This is DP, Josh Zaini’s first venture into short filmmaking and it’s a successful one at that. His framing is lovely, the shot choices are smart, and the low angles on the school bus are some of the best shots in the film. The night exteriors of the depot are atmospherically backlit too.

Erin McKimm (who scored Creeper) delivers another memorable score and some really sharp sound design here. Early provocative foley techniques effectively generate a sense of uneasiness and help convey Elki’s ever-growing frustration and anger toward what she’s constantly having to deal with.  A lovely section of the score contains somber piano and violin, and then when the situation escalates, the driving synth begins to flow in. The creatures terrifying sound is another facet worth mentioning. A rather inexperienced Savannah McDaniel simply blew me away with her performance. She’s got her eye line right, a truly expressive face, and she manages to hit all the required emotional beats – seemingly doing so with ease. I wasn’t surprised at all to see Steve Boyle’s name (expert special effects artist from Queensland) attached to this project. Boyle’s worked on a number of impressive films (Daybreakers, Bait, and Boar are just a few) and combines here with Toby Barron to bring this otherworldly monster/alien to life. Macdonald times his final dramatic transition in the ideal place and the viewer is also left to make up their own mind about the validity of the creature and what it represents in the scheme of the narrative.

One particularly shocking moment between Noelle and Elki at the start does lead to the smallest of continuity errors regarding the latter and her makeup (at least if what I saw or didn’t see, was right).

I recall giving Drew’s previous short Creeper a perfect score (something I don’t usually do) and I’m very much inclined to do the same thing with this follow-up film. This is simply brilliant filmmaking of the highest order. The issues on display are pertinent, the technical elements are outstanding, and McDaniel has got that raw talent that very few actors possess. The creature is carefully presented and the film as a whole is entertaining, informative, and thrilling in its final stages. I can’t fault Macdonald at all, he’s a guy who budding filmmakers can look to in order to see how it’s done. I feel he’s poised to have a successful career in the industry if he continues driving high standards and production values. With only a couple of weeks left before I compile my Top 10 of 2018 list, it’s almost impossible to see anything dethroning Here There Be Monsters for the best short of the year. Keep an eye out for this one soon, you certainly won’t want to miss it!