Bought to you by Gravitas Ventures and Hood River Entertainment comes “14 Cameras”, A Horror/Thriller Written by Victor Zarcoff (13 Cameras) and Co-Directed by Seth Fuller and Scott Hussion. 14 Cameras is the follow-up to 2015’s 13 Cameras, a film that centered around Gerald, a seedy and reclusive landlord with a specific perverse pleasure for surveilling people while they went about their daily lives *see review* https://adamthemoviegod.com/13-cameras-review/. 14 Cameras opens up with Gerald (played by the returning Neville Archambault) once again, mid spying on a young vacationing couple (played by Zach Dulin and Kodi Saint Angelo) who are unknowingly staying in a home that he actually leases. Later, a family of five comes to stay in the same lavish home but are unaware that Gerald has rigged the place with a series of spy cameras that are live streaming 24 hours a day over the internet. The film also stars Amber Midthunder (Hell Or High Water), Brytnee Ratledge (Only The Brave), Brianne Moncrief (13 Cameras), Chelsea Edmundson, John-Paul Howard, Hank Rogerson, Lora-Martinez Cunningham and Gavin White. 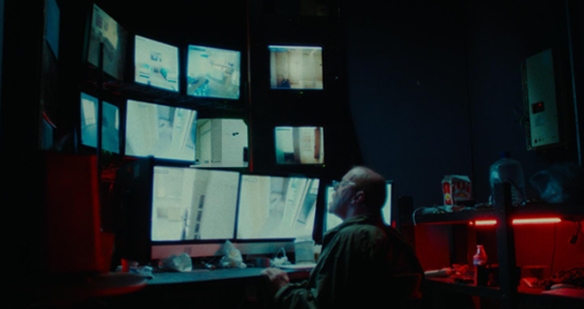 I enjoyed the structure of Zarcoff’s original film (which he also directed) and how it raised the concerns that come with these sorts of technological advancements. Perhaps the more we learn about electronics, the less we can control in terms of confidentiality.  The subject matter fittingly lends itself to a voyeuristic presentation and Fuller (also the DP) handles that very well. Much like in the first film, the production is a balanced mix of surveillance footage and conventional cinematography. Much of Gerald’s screen time is spent watching his cameras, so we see what he sees. Then when the film takes a more intimate look at the seemingly oblivious subjects, we start to get the more cinematic approach. Fuller’s framing is neat and he employs a lot of nice tracking shots and rotating movements over the course of the 90 minutes. The resulting edit is clean,  the pacing is good, and the audio track is consistently clear. The music by Paul Koch is quite tempered, not something you’d usually expect in this type of thriller but it works. There are some nice low-end synth notes but it’s the use of a heartbeat sound effect that really stands out and coincides with Gerald’s growing elation. Due to its subtlety (I know… who’d have thought?), it actually took me a while to realize a few of the surprising connections to the first film. The biggest improvement upon the previous 13 Cameras is the sheer likeability factor with some of Victor’s new characters. That and the multiple avenues that see three sets of different characters given screen time over the course of the story, rather than just the one.

In spite of some fairly one-dimensional bases, most of the core family present as inherently nice people. There isn’t the petty level of bickering and overplayed drama that surrounded the young couple in Zarcoff’s previous film. I even like the couple that was introduced in the beginning and was disappointed they got such little screen time, especially Kodi who was lovely. All the performances are solid and each of the female characters looks gorgeous. Two different stories play out simultaneously over the course of 14 Cameras. Married couple, Arthur (Rogerson) and Lori (Cunningham) unknowingly become targets of Gerald’s after renting the home and dragging their teenage kids, Molly (Ratledge) and Kyle (Howard) along, with Molly’s best friend, Amber (Midthunder) in tow. Molly’s the type of girl who is very much what you see is what you get, but Danielle, whose struggling with a cheating boyfriend, clearly has a little bit more of a wild side that comes to the surface when she drinks and smokes. Kyle is sort of third wheeling it and doesn’t really want to be there but does the family thing anyway. The second story involves Sarah (played by Edmundson), a young woman who is held against her will by Gerald, and who ultimately ends up working with another victim (Moncrief) in a desperate attempt to escape. Whilst everyone is solid in their respective roles, it’s Archambault that takes the cake here. His brutish nature and imposing physicality is something seldom seen, but that’s only part of the reason he impresses. It’s actually his jilted mannerisms, mouth always agape, and the fact that he says very little, in turn making Gerald so powerful. Additionally, Archambault has protruding varicose veins that help project an unwavering intensity. Gerald doesn’t just watch, he interacts via some creepy behavior that appears to be randomly gone for at any given stage. 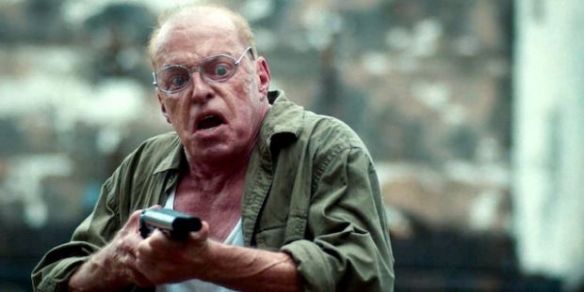 Some of the editing transitions are unnecessarily jolting as they go between the various house cameras. I don’t like the shaky approach that’s representative of someone knocking the camera. Clean cuts would’ve looked a lot better. It’s conveniently always quite dark inside the holiday home, especially as night approaches. Even after the girls hear a few noises and begin to suspect that all might not be as it seems, they still don’t actually turn on any lights. I didn’t find that overly realistic. There are a number of different locations that Gerald makes his way around to over the course of the film and I lost my bearings on a couple of occasions. I couldn’t help but think logistics might have been more problematic for him than we’re led to believe. There’s the key location where the family are staying, Gerald’s place, Sarah’s unit (I don’t know where that is in relation to the other desolate locations) and a hole in the ground that serves as his underground “chamber” (for lack of a better word), which I believe was on the same property as his house but I’m not entirely sure. The film is nicely paced but the anticipated payoff doesn’t come in the usual form of a body count or an escalation in on-screen violence. Most of the dialogue is pretty well-written but Kyle not being able to go a sentence without dropping the F-bomb does get a bit tedious. There’s a few continuity issues and details we’re not privy to but they’re fairly minimal. E.g, What was his incentive behind live streaming the family across the internet? It seems like a big risk to take if you’re trying to stay anonymous. Little things like not being shown how Gerald ultimately vacates a place that’s being guarded by a dog, or when he’s hit by the truck in the third act it occurs via the wrong direction. We see young, Jr (White) facing the engine with his back to Gerald, which would indicate the driver needing to move forward to run him over, but instead, she reverses to do it. Speaking of the truck, it’s big, and it’s likely that someone would’ve seen it parked at one of the locations, especially considering Gerald visits each of them multiple times.

14 Cameras is a surprisingly good Horror/Thriller sequel, albeit somewhat predictable. It’s reminiscent of films like “Alone With Her” and the incredibly underrated “388 Arletta Avenue”. Seth and Scott explore the potentially damaging effects of a world controlled by big brother, especially when those capabilities are accessible to everyday people. The cinematography methods are practical, the sound design is good, and the music works well too. The inclusion of several more characters, of whom are likable, is a welcomed addition. Each of the performances is strong and the story ends up cleverly tying into Zarcoff’s original film. Neville Archambault’s intense portrayal of a seemingly sleazy man, who deep down is perhaps just a lonely soul, is the main reason for giving 14 Cameras a spin. Some of the editing techniques and faint lighting weren’t fully to my liking, and if you’re not paying attention to the ever-changing locations you can get lost. There are a handful of minor continuity troubles and a few things that raise questions. A little more action wouldn’t have gone astray either. It’s rare that a sequel outshines its original, but 14 Cameras just so happens to be the superior of Zarcoff’s two films. If you like the less is more approach when it comes to your thrillers, I think you’ll get a kick out of this one. It’s currently playing on Netflix and you can check out the official trailer below!