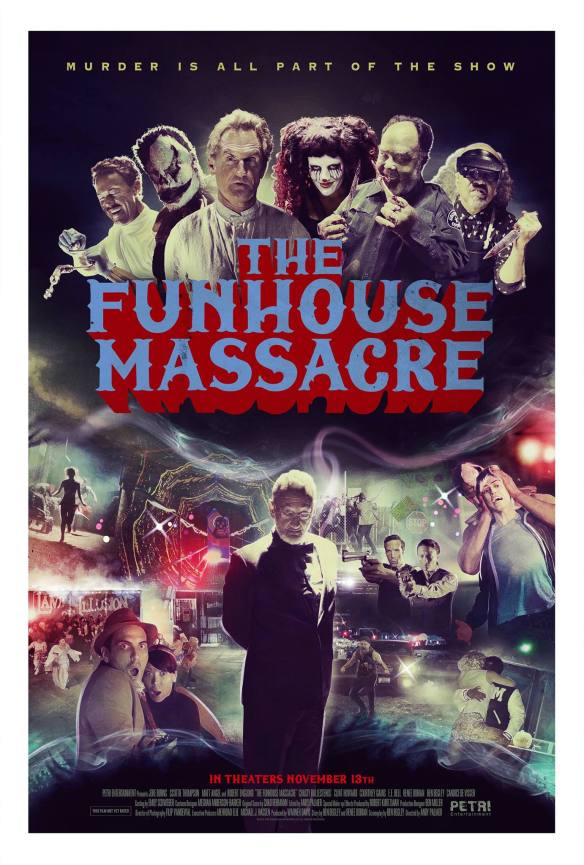 Firstly, I’d just like to say thanks to Director, Andy Palmer for allowing me early access to an online screener of his new Horror/Comedy, “The Funhouse Massacre”. Those of you who keep tabs on my website would know that I recently reviewed another of Palmer’s film’s, “Badlands Of Kain” see review *https://adamthemoviegod.com/badlands-of-kain-review/*. The Funhouse Massacre was written by Ben Begley and centres around a group of young adults at a Halloween funhouse. Unbeknownst to them and the rest of the carnival patrons, 6 of the world’s most dangerous psychopaths, have escaped a local asylum and are on their way to the event to get back to what they know best, killing. The film stars Jere Burns (From TV’S Justified and Breaking Bad), Scottie Thompson (The Blacklist and NCIS), Clint Howard (Austin Powers), Robert England (Nightmare On Elm St.), Matt Angel, Ben Begley, Renee Dorian and Candice De Visser (in her first film).

I’ve been tracking the movements of The Funhouse Massacre for a while now. I had the privilege of meeting Robert England at a convention and picked his brain a little about the film, it sounded like a blast. The poster art looks great, definitely a nod to some of the 80’s Horror films. I’m a bit disappointed with the US artwork for the Blu Ray release though, I was hoping they’d use the above poster.. any who. I really like Begley’s script, tonally it’s an even blend of Horror and Comedy. He’s fused our love for the carnival and haunted house theme, together with the thrill of a classic slasher flick to get a good settled balance. The camera work is really nice, particularly once the funhouse scenes begin and there’s a number of well-timed, focus shots and lots of gentle panning. The audio seemed rather uneven during the opening in the asylum but it got a lot better as the film progressed. During the first interaction between England’s character and Visser’s, his audio was sharp and distinct but hers was a little hollow (maybe due to the location). The soundtrack was fairly standard but there was a cool industrial style song, similar to music from the band “Orgy”, I dug that. The best technical attribute here is the lighting, or more specifically the atmosphere that’s gauged from the lighting. There’s a combination of fog and smoke used throughout that really matches the “Carni” motif. Speaking of which, the set design was quite elaborate. Palmer really embraces the premise by giving us a substantial amount of variation in sets. Each area has its own unique feel by catering to the individual maniac that minds it. Given this is an independent film, the attention to detail deserves plenty of praise.

Ben had only written one short film before The Funhouse Massacre, never the less, he’s clearly got an understanding of the genre and its fan base. Begley’s approach is pretty conventional, he first sets the scene by introducing us to his demented group of killers, followed by a second act involving our four young adults, Morgan (Angel), Laurie (Dorian), Christina (Chasty Ballesteros of “Final Destination 5” and “GirlHouse”) and Jason (Sterling Sulieman from “Pretty Little Liars”). I suppose you’d say six if you include Randall and Mikey (played by Leigh Parker and Michael Reid), though they don’t get a great deal of screen time. Of course the third act is all about the carnage and the payoff and it’s probably the best part of the film. Begley provides us with plenty of enjoyable pop culture references (as the Writer and an Actor). Matt Angel’s, “Morgan” has an amusing “Dr Who” jive with a grumpy old customer at the diner where he works. There’s also a handful of references to Danny Trejo’s infamous character, “Machete”. Gerardo (played by Erick Chavarria, “Get Hard” and “Bone Tomahawk”), an Hispanic employee at the same diner, don’s similar leather to that of Machete and the joke definitely lands. Most of the film’s comedy is situational based and involving Deputy Doyle (played by Begley himself). He’s a lovable guy but a rookie cop with a lack of awareness, which makes for a bunch of really funny lines. Ben genuinely seems like a funny guy and that’s probably why his character is the most memorable.

This cast make for a really great mix and most of the performances are solid. Robert England plays “The Warden”, head of the local Asylum. Even with limited screen time, England makes the most of his dialogue and executes it with great diction. Explaining to Ms.Quinn (Visser) and in turn, the audience, who each of these colorful characters are and why they’ve been imprisoned. There’s “Rocco” the clown (Mars Crain), an ex-wrestler who took things a little too seriously in the ring. “Animal” (E.E Bell), a cook who liked to serve people up in his dishes. ”Dr Suave” (Sebastian Siegel), a dentist with a knack for going overboard with the drill. The “Taxidermist” (Howard), a man with a penchant for working on live “patients” instead of dead animals. Last but not least, self-proclaimed leader of the group “Mental Manny” (played by Burns), the ex-leader of a cult that orchestrated mass suicides. Everyone does a solid job but Bell wins the votes for creep factor and Burns delivers a calm and controlled, yet disconcerting performance as Manny. Both Chasty and Sterling are serviceable as the “sex-crazed couple” but the characters are somewhat one-dimensional. It’s really Morgan and Laurie that are the most relatable. They’ve got that unspoken love thing going on (well sort of) but Morgan tends to trip up on his words when it comes to Laurie and she’s stuck in a place of uncertainty, still, you can’t help but root for these two kids. Angel’s comedic timing was consistent and Dorian seems down to earth and suited to play your girl next door type. Thompson plays “Sheriff Kate”, a police woman heading a murder case she thinks might be related to the escaped inmates. She’s okay but I wasn’t a fan of the character, so when it came to the police, I much preferred Deputy Doyle. There’s so many characters in the film that it’s difficult to cover them all, so I apologize to those who weren’t mentioned. 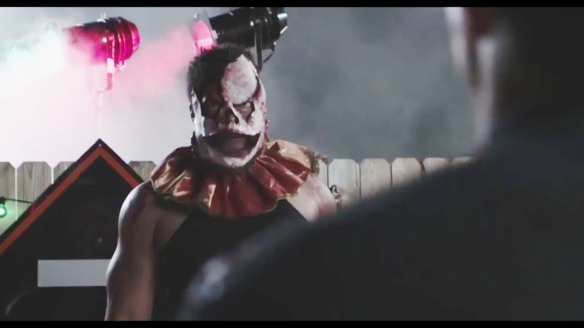 I’ll close on this section of the review by touching on the blood/gore and practical effects. Robert Kurtzman heads up the special effects team for The Funhouse Massacre and again, showcases why he’s one of the best in the business. If you don’t know Kurtzman you’ve been living under a rock.. (I kid haha) but in all seriousness the guy has worked his magic for years. He’s worked on films like Boogie Nights, Scream, From Dusk Til Dawn, The Green Mile and more recently It Follows and Tusk. There’s a couple of nice and simple kills early on in TFM but I’ll admit, I started to worry half way through that I’d seen the best of it but I can safely say now that wasn’t the case. Once the story picks up so does the action. There’s an impressive amount of blood and gore during the final act of the film, the body count rises and we’re party to some pretty fun stuff. I don’t want to spoil anything but my two favourite kills came in the form of a decapitation, which was through sheer brute strength, and a messy and practically achieved kill with a giant mallet (something I hoped to get in the film “Circus Of The Dead” but didn’t). 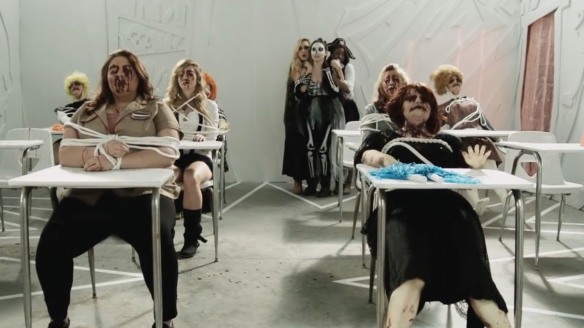 On the technical front, my only gripe was that most of the music was too loud in the mix. At times it somewhat overpowers the dialogue, most notably during the opening scene in the asylum. Speaking of the music, there’s a few good tracks but the one thing missing from the film was the token “circus theme” (you know the one), it was used in Tobe Hooper’s 80’s film, “The Funhouse” and so I guess I expected they’d use it here. With these types of films usually centering around young people, you get your fair share of immature dialogue which in this case includes, “hashtag” this or that, as well as, “That’s what your mom said” jokes. Maybe it’s just because I’m going to be 30 this year but I feel like I’m kind of past that stuff, well for the most part (haha nit picky I know). I always talk about the three keys when it comes to making a successful horror film, Sex, Violence and Comedy. While The Funhouse Massacre had all three, the sex scene actually felt out-of-place. In any other setting I would’ve been all for it but somehow it didn’t accomplish anything (other than potentially setting up a death) and just ends up feeling kind of awkward. Additionally, the inner workings of the script, in relation to the sheriff’s connection to the story, felt unnecessary. The finer points involving her character seemed tacked on as well, not to mention a silly ending that loosely leaves room for a potential sequel. More importantly, you’ve got a key couple of characters in Morgan and Laurie, who are very likeable, warranting a more fitting conclusion than the one they got.

The Funhouse Masscare is a solid entry to the Horror/Comedy sub-genre, it’s guaranteed to entertain fans of these type of films. Kudos to Ben Begley on writing a fun and self-aware script, that blends both elements together pretty well. The camera work is neat, the lighting atmospheric, especially when combined with smoke and fog and the set design is quite impressive given the film’s modest budget. I love the clear-cut, three act structuring that helps us learn who the killers are and who are teens (or young adults) are. I’m a fan of good, pop culture references when their dispersed as well as this and almost all of the rest of the comedy works too. Our couple of leads are sympathetic and turn in the most well-rounded performances, while it’s a tie between Jere Burns and E.E Bell for the best of the psychopaths. In retrospect there really isn’t a weak link among the cast. From the moment Robert Englund enters the frame, to the final showdown between Doyle and Rocco, it’s all pretty damn good. Kurtzman and his team’s practical blood and gore work is a stand out, even the general makeup looks good. The highlight of this one is the final act, where all hell breaks loose, saying that, I think they should have done away with the lousy sex scene and instead, filled the time with a few more kills that involved better gags (more like the couple we see towards the end). The music track needed to come down in the mix a bit and a few of the writing points could have been tidied up, specifically the silly ending. I wasn’t fully satisfied with it given the quality of character we had and I wanted more killing but I know that’s probably just the horror fan in me. Palmer’s film is so much fun that I pre-ordered it from Amazon and you should too. It’s out in June! check out the trailer below.