Firstly, I’d just like to thank Kate at October Coast PR, as well as Hewes Pictures for sending me a screener to their new Horror Anthology titled, “Blood Clots”. Blood Clots is a collection of seven horror themed short films from Australia, Canada, The UK and The United States. I’m going to give a quick summary and rating of each short, followed by an overall rating for the entire anthology.

Hell Of A Day is a 13 minute short from Australia, Written and Directed by Evan Hughes and starring Alexandra Octavia. Octavia plays a mystery woman who ends up stuck in a pub while trying to survive a zombie apocalypse. Trent Schneider’s high quality cinematography is a big part of what drives Hughes atmospheric country setting. The framing is wonderful and the shot choices are varied, made up of aerials, slow pans and close-ups. The basement makes for a great location for the climax, that and the pub itself is laced with plenty of smoke/fog to create a dire mood. Mark Farrow’s sound design is incredibly sharp and there’s a nice bass and drum orientated score from Erin McKimm too. The other selling point of the short is some of its impressive practical blood and gore fx. There’s very little on-screen action but the aftermath shots are more than serviceable. On the downside, there could have been some more attention to detail with some of the extras zombie makeup. Alexandra’s acting feels a little restrained in places and I got frustrated with her lack of urgency about finding a weapon or something to defend herself with. Small gripes aside, Hell Of A Day is a really good homegrown zombie short. 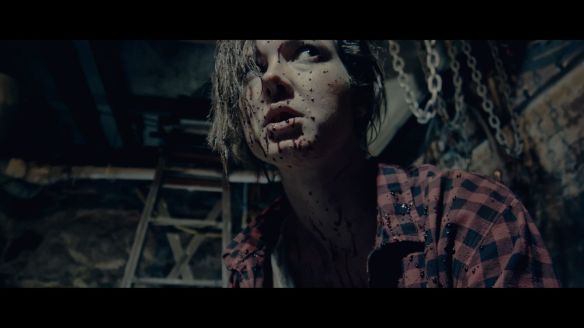 The zombies are coming

Never Tear Us Apart is a 7 minute Canadian made Horror/Comedy short, Co-Written by Chris Bavota and Sid Zanforlin (who also directs). It sees two friends, James and Colin (played respectively by Matt Keyes and Alex Weiner) encounter a couple of backwoods cannibals while searching for James’s long-lost relatives. The film also stars James Rae and Leigh Ann Taylor. I thought this film looked familiar as it played out, and then it dawned on me that I remember seeing this 2015 short film a couple of years ago. The comedic tones started coming back to me as James and Colin showcased their natural dynamics. Again, the cinematography and editing here are really crisp. The chase sequence makes for one of the best scenes and all of the color grading looks consistent. It’s very well acted, and more importantly both the characters are likeable, in turn making Keyes and Weiner a funnier duo. There’s a nice on-screen kill in the beginning and a rather impressive practical decapitation that only sees a minimal use of CG. The only lame aspect of Never Tear Us Apart is the “scream” stock sound playing over the title credits because we’ve heard that a hundred times before. Sid and Chris have got a darkly funny but horrific little short in Never Tear Us Apart and I suggest everyone check this one out. James immediately regrets his decision… or does he?

Blue Moon is 12 minute English Horror short, Written by Airell Anthony Hayles and Directed by Martyn Pick. Three teens are out to lose their virginity at a dogging site in the woods but encounter a gang of werewolves and are forced to fight for their lives. The film stars Madalina Bellariu Ion, Adrian Annis, Brian Hanford and Katherine Rodden. IMDB’s plot synopsis of Blue Moon is a little confusing and the pacing isn’t great. For one, the central character is a seedy middle-aged man with a handheld camera whose attempting to exploit a gorgeous young woman named, Nicoletta (played by Ion). So I don’t remember seeing any teenage boys and I don’t re-call anything about the loss of virginity. Anywho, the films setting in a public place where people have sex is a rather odd, albeit unique choice. There’s some nice gentle tracking shots through the tops of trees in the beginning but a majority of the content is presented via live camera or the handheld approach. The acting is servicable and Madalina is absolutely stunning. Most of the action takes place off-screen but the aftermath of the blood and gore fx look cool. In regard to the werewolf, it appears to be a practical suit, which is always a tick in my column. All of my issues with Blue Moon are technical related ones. The dialogue audio is a little low in the mix and I’m certainly not a fan of the shaky cam stuff on display as the situation escalated. John Fensom’s rapid editing to depict the transformation from human to wolf doesn’t quite compute either. I understand that element is probably down to time and budget constraints though. You do all you can do I guess.

The full moon is coming

Time To Eat is a 4 minute Horror short, Written and Directed by Luke Guidici. A mischievous young boy, Xavier (played by Ethan Michael Mora) discovers a monstrous revelation after he follows his bouncing ball down into the basement. The film also stars Ydaiber Orozco. Time To Eat is a blink and you’ll miss it type of deal that pays homage to the likes of H.P Lovecraft and even Roger Corman. The standout feature of this quickie has to be Nathaniel Smith’s fantastic quirky score, reminiscent of some of Tim Burton’s previous collaborations with renowned composer, Danny Elfman. The camera work and framing are both very good and there’s yet another atmospheric basement put to good use. A handful of POV (point of view) shots create a little mystery during the closing stages and the creature aspect, albeit mostly CG in nature, still works well. The only part of the film that makes very little sense is the boys trepidation with entering the basement in the first place, ultimately made null and void.

Still is a 7 minute Horror/Comedy short, Written and Directed by Carl Timms. This English-made short continues the theme of the zombie apocalypse, picking up with a living statue street performer (played by Joe Capella) caught in the middle of an outbreak in Golden Square. He must stay perfectly still and conceive a plan of escape if he wants to survive. What I like most about Still is Timms fun premise, that and the different take on situational comedy which can work well in the confines of the zombie sub-genre. DP, Alan Tisch sets up the film with some great opening shots of the big attack sequence in the middle of the square, there’s also a handful of nice macro shots as things roll on. Matthew Steed’s fusion based score really complements the situation nicely and Capella’s narration puts a fresh spin on the delivery of the material. Good practical blood spray gives the horror fans something to indulge in as well. There’s a couple of brief black and white flashback shots that aren’t necessary and the films closing shot calls into question the continuity (when you look at the direction the crowd approaches our statue man from). Still, still is good stuff. 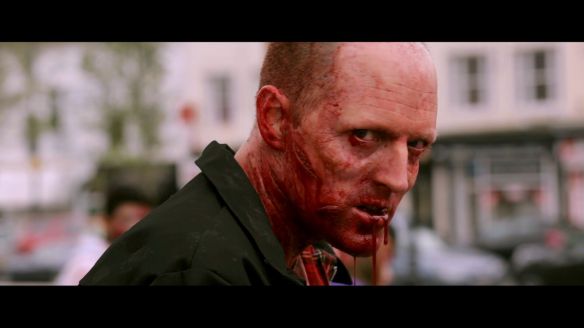 Hellyfish is a 12 minute Sci-Fi/Creature Feature short Co-Written by Kate Fitzpatrick and Patrick Longstreth (who also co-directed). Hellyfish centres around a missing nuclear weapon that’s currently leaking radioactive waste into the ocean just off of the coast of Tybee Island, GA. A devastating Jellyfish attack is about to hit a group of unfortunate beach-goers whose day of fun in the sun quickly turns to a nightmare. I actually reviewed this particular short film here at AdamTheMovieGod several years back and I thoroughly enjoyed it. Hellyfish has some crisp clear audio, along with some impressive camera work and editing. The digital effects work is quite ambitious and the end result is actually a pretty good one. The mother of all showdowns during the climax reminds me of films like “Frankenfish” and “Boar”. There’s a couple of cute girls in here and each character has their moment in the sun (so to speak). I noticed a few focus issues and some of the depth of field stuff is a little off. Despite the sizeable chunks of action in such a short run time, there’s no actual practical blood and gore which might disappoint some. It would’ve made for a nice addition. Even with its shortcomings, Hellyfish is one of the most entertaining creature feature shorts going around. 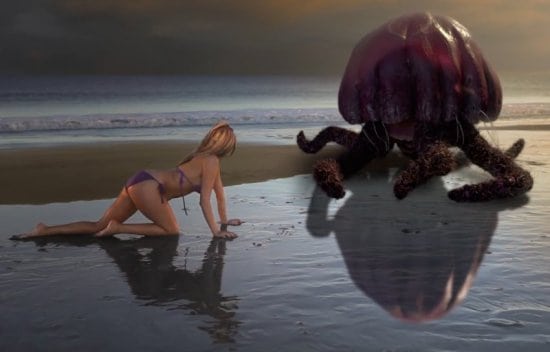 Call Of Charlie is a 14 minute Horror/Comedy/Drama short Co-Written by Guy Benoit, John Simpson and Nick Spooner (who also directs) and it rounds out the Blood Clots anthology. The film sees a new age Los Angeles couple (played by Brooke Smith and Harry Sinclair) fix up Charlie (Sven Holmberg), an Ancient Evil from beneath the sea, on a blind date. The film also stars Evan Arnold, Roberta Valderrama, Kristin Slaysmith and Bradley Bundlie. Like the rest of the anthology, the technical facets here are all high quality. DP, Adam Santelli has worked on “Fear The Walking Dead” and his ability to frame well and shoot crisply shows that he’s more than capable. The audio track is nice and loud and Michael Cudahy’s lively offbeat score complements the bizarre nature of this particular entry. It’s well acted and the monster design is completely practical, it looks superb on camera. I can’t help but notice that something’s a miss when only one of your dinner guests thinks it’s weird you invited a sea creature to the party. I actually wanted to know more about Smith and Sinclair’s characters and how this “relationship” (for lack of  a better word) with Charlie came to be. The pacing does linger in places so this one might be a little to out there for some but I still found it to be quite a fun watch.

Blood Clots is a very impressive horror anthology from a number of really talented individuals, perhaps even one of the best of its kind since 2013’s, V/H/S 2. There’s no inferior products here due to a lot of really consistent technical application.”Hell Of A Day” brings some great atmosphere and is one of the best, “Never Tear Us Apart” has a cannibal edge but remains funny, Blue Moon is your after dark caper though probably the weakest, and “Time To Eat” gives of those essential evil child vibes that go hand in hand with the horror genre. Rounding out the film are a unique “Still”, which is probably the best premise of the bunch, and creature feature doubles, “Hellyfish” and “Call Of Charlie”, albeit tonally very different from one another, equally as enjoyable. There’s a bit of everything here for fans of horror and a number of its sub-genres. Blood Clots is now officially available for viewing on Vimeo and Amazon and please keep an eye out for it soon on VOD (video on demand)! Until then, you can check out the official trailer below.