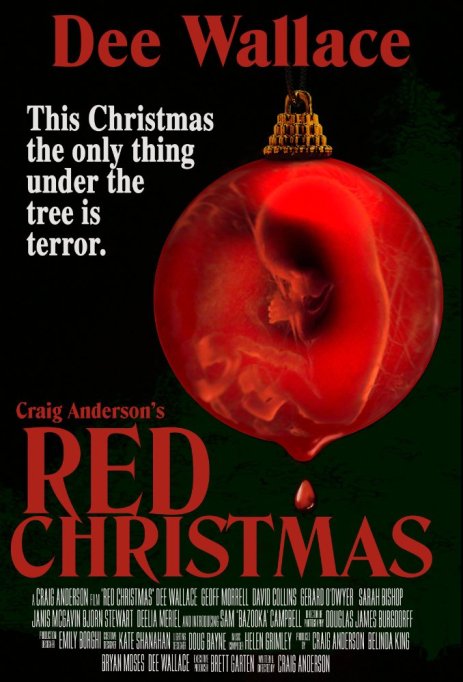 Firstly, I’d just like to say thank you to Writer/Director, Craig Anderson for allowing me early access to an online screener of his first feature-length Horror/Thriller, “Red Christmas”. Red Christmas is an Australian film about a somewhat dysfunctional family coming together for Christmas on the families rural property. Diane (Dee Wallace of “E.T”) is the mother and proverbial glue that holds them all together. She manages the property with her brother Joe (played by Geoff Morrell of “Rogue”) and spends most of her time caring for Jerry (Gerard Odwyer), her son with down syndrome. As the other siblings and their partners arrive, so too does a cloaked stranger who threatens to reveal secrets from Diane’s past that have been kept hidden from her children. The film also stars David Collins (half of “The Umbilical Brothers” comedy duo), Sarah Bishop, Janis McGavin, Bjorn Stewart, Deelia Meriel and Sam Campbell.

I hadn’t seen or heard much about Red Christmas, other than a short teaser trailer for it on popular horror website, DreadCentral. The trailer didn’t give a lot away (other than perhaps highlighting a particular death) and the poster wasn’t something that really jumped out at me but I discovered that it was an Australian film and I’ve been hoping to review a few more of those on my site. Anderson’s script is an intriguing one to say the least. For most of its duration, I didn’t really know how to take Red Christmas. It presents as a home invasion style horror flick but there’s a specific undertone in the narrative. Central themes such as abortion, disability and depression are covered, as well as the ramifications of the decision-making on the termination of birth. With Anderson’s film, the consequences from a choice made by a key character are showcased in a completely far-fetched, albeit entertaining way but hey, this is movie making people (haha). The audio track in this one is consistent and Anderson keeps the drama primarily internal, using just the one location. The shot choices in the opening act were great. Lots of simple camera movements, plenty of diversity in the placement and all the framing is evenly displayed. During the film’s opening there’s some effective slow motion used, something I’m not normally a fan of but in this case, given the revelation, it works. I liked some of the score, most notably during the rising intensity with some of the action related content. The themes are fairly generic but balance the style of storytelling well enough. I don’t know if it was the intention to light the film with a Christmas themed arrangement, whether directly or indirectly, that is the end result. It gives the film a high production value feel but it definitely takes something away from the suspense. As soon as night comes, everything is so colorfully lit that it makes it difficult to engage in the stalking aspect of the story. There was definitely room for use of shadows and darkness but it wasn’t fully capitalized on. 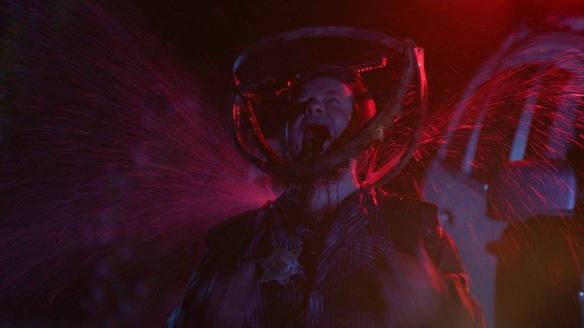 In regard to the characters and performances by the cast, everyone does well to hold their own. It has to be a little daunting when you see your name billed next to someone like Dee Wallace. Here’s a woman who started acting in the 70’s, whose accumulated a long list of credits that include “The Hills Have Eyes”,”The Howling”,”Cujo”,”The Frighteners” and of course the infamous, “E.T”. She’s had a very successful career in the Horror genre and all of her fellow cast are Australians with little to no experience working in the genre, so I give them credit for their consistency here. Wallace gives the best performance, keeping her natural Kansas accent and playing the motherly manner to a t. My personal favourite addition to the cast was Gerard Odwyer. What a fantastic thing to see, a young man with what must be an incredibly difficult affliction, showing us all what you can do if you put your mind to it. His role as Jerry requires a certain amount of drama, humor and honesty and he delivers all three very well. Kudos to Craig on casting him! It was great seeing Morrell again, the last film I saw him in was “Coffin Rock” (a really solid South Australian film). In Red Christmas he plays Diane’s American brother, Joe. His screen time is limited but he supplies us with a few laughs. Collins and Bishop play Peter and Suzy, a deeply religious couple, Suzy being one of Diane’s daughters. Suzy’s constantly butting heads with her condescending sibling, Ginny (Janis McGavin). Ginny and partner Scott (Stewart) are expecting, which is something Suzy resents because she’s never been able to get pregnant. The combination of different couples make for some entertaining scenes, especially Peter’s shameful but funny behavior. Rounding out the group is adopted (I think?) sister, Hope (Meriel), the young free spirit of the family.

I think the most memorable aspect of the film is the makeup and practical effects. The film only runs 80 minutes and there’s not a great deal of action in that time but what we do get in the way of special fx is impressive. The first notch to the body count doesn’t come until the end of the first act and I’ll admit, I was disappointed to see it occur off-screen (or not see it… if that makes sense haha). The saving grace being that Anderson makes up for the cutaway by making the aftermath of the kill look fantastic. I won’t spoil anything for those of you who end up watching this one, just know that the attention to detail in the first sequence is great. In fact, the same can be said about the second piece of action. A style of death similar to that of one in the “Wrong Turn” horror franchise (personal favourite). If you’ve seen the trailer for Red Christmas, or looked at the screenshots (including the one in this review) then you’ll know what the “Bear trap” sequence is all about. It’s a very impressive trap, my only criticism was that it was all too briefly on-screen. The build up to the kill and of course the impact itself could have been a lot better, after all, you’ve got great effects so why not showcase them. I’ll also make special mention in reference to the makeup job on Cletus, it looked great. (He can be seen in the image below)

Unfortunately Red Christmas doesn’t quite maintain its high production value as things progresses into the second act. There’s a handful of frames that are slightly out of focus during a scene where Diane gathers everyone and takes them upstairs to hide from Cletus. In the same sequence, the handheld camera work starts to get a little shaky but given the situation is fairly intense, I suppose it can be understood from a dramatic point of view. The same thing occurs later during the group’s discovery of a particular characters body. The method used is a combination of frenetic camera work, mixed with slowed frame rates and I’ve just never been a fan of it. It’s a creative license thing though, some viewers will like it and others won’t. It’s disappointing that those techniques were used too often in the second half of the film and let it down. Most of the dialogue feels natural enough but there’s an overuse of the F bomb from a stereotypical, Aussie farmer (I sort of get the point). There’s also some stilted lines delivered by Scott and some dullness through Suzy’s dialogue, though to be fair I think that’s more keeping in theme with her character. The one thing stylistically missing from Red Christmas is that essential Christmas soundtrack. Although, this isn’t huge on suspense so you can’t make those themes sound creepy but at the same time, you can’t have them be happy either. It’s just one of those things that I feel go hand in hand, if you’re doing a holiday themed film you’ve got to have those tunes accompanying it. 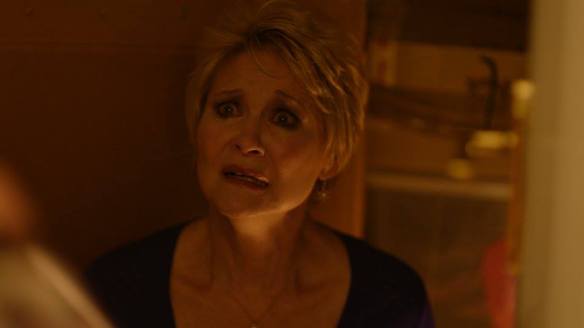 Not all families are alike, in fact often they’re not at all, as is the case here. Saying that, I’m not sure where Hope fit into the equation (or if it was mentioned, I don’t recall), I assume she was adopted, taking into consideration Diane’s age, current position in life and past experience with child-birth. My other questions are surrounding Diane’s not so sudden reaction to Cletus’s arrival. At first glance, this is a guy covered from head to toe in a dark cloak and a bandaged face, you know nothing about him yet you offer him refuge. I guess it’s in the Christmas spirit but you’d think you might ask some questions first before letting him in but nope. Once inside, he insists on reading a loud to the whole family, a letter he wrote to his mother and it’s not until that point that things start getting interesting. Diane believes it’s someone (a teenager, I think she mentions) playing a cruel joke on her, so she freaks out and kicks the mysterious man out of her house. It’s entirely understandable that she may be trying to conceal the secrets of her past from the family, by coming up with what she deems to be an acceptable alternative. The problem is that none of her kids put the question to her, What was that all about? Who was he? What was with the letter? all valid and reasonable questions that never get asked, that’s a little difficult to believe. I’d describe Red Christmas as a slow burn type of Horror film and a rather predictable one at that. With that being said, a lot of what I review here at Adamthemoviegod is Horror related, so chances are I’ve probably seen a lot more of these films than your average movie-goer. 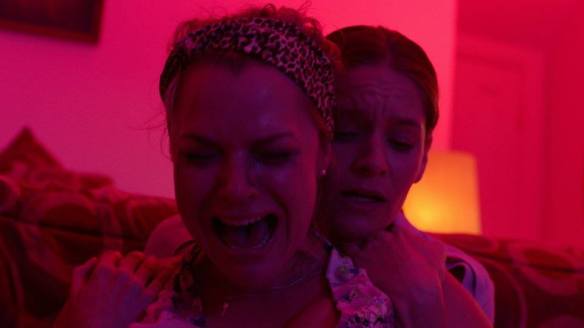 Craig Anderson’s, Red Christmas is a little different to the usual run of the mill home invasion flick. The introduction of a couple of dramatic themes you don’t often see in horror, act as his original spin on the sub-genre. The audio track is clear, sections of the score are active and most of the shot choices and framing are serviceable. The lighting seems inspired by European cinema but it does feel out-of-place in certain scenes, though it’s all nicely presented. The performances are all solid and I particularly enjoyed watching Wallace in something new, as well as being introduced to the good-natured, Odwyer. The practical effects and makeup are as good as anything in the genre, I just really craved more of it because there’s not quite enough action there to satisfy me. There’s some patchy dialogue and I can’t rate the camera work in the second half of the film in comparison with how it started. The inclusion of a Christmas themed score would have been nice too. Some of Diane’s inconsistent reactions in regard to Cletus were confusing and no one seemed to ever ask the right questions about what was going on and why it was going on. I don’t think the opening sequence does the film any favors either, as it predictability sets events in motion and foreshadows what’s to come. With that in mind, it might prevent some people from wanting to revisit this one. For a first full length feature, Anderson has delivered a reasonably entertaining genre film that’s worth a watch. Keep an eye out for this one soon!