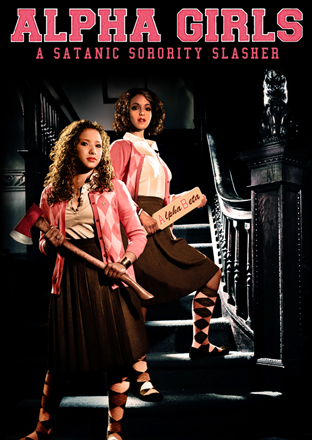 Firstly I would like to thank the co-directors of “Alpha Girls”, Tony Trov and Johnny Zito for sending me a screener of the film before its official release date. Alpha Girls is about a Sorority House that becomes terrorized by an old curse. Those who seek greed and wealth and desire must sacrifice something in return. Morgan (played by the lovely Falon Joslyn), has had a troubled past but has been given the opportunity to join the sorority and get her life back on track. Along with Cassidy (Beverly Rivera), a sassy young pledge and a couple of other girls, they try to survive the pledge week together. Sister Veronica (Nikki Bell), torments and pushes the girls to their limits that they finally decide that enough is enough. Cassidy knows about an old ritual that can give you anything that you desire, but in return you have to sacrifice something… or someone. The group gets more than they bargained for when Cassidy loses control.

I’m not sure about what the budget for Alpha Girls was but it seems to have great production value, considering it’s a low-budget film. The technical aspects of the film are commendable. It’s got nice crisp dialogue and some very smooth camera work, along with some really effective lighting. I think the chemistry between these young actresses that make up the core group seems very natural and realistic, not to mention they are all very easy on the eyes ;). I like the opening five-minute scene, I thought it was a real throwback to films like “Hocus Pocus” and “The Craft” some cool and realistic blood was spilt too! The film contains some really good song choices. A fitting mix of pop, rock and electro based music. Some of the action sequences were well done too. Particularly the cheesy 80’s style axe kills. Even though I could tell the room was covered in plastic so the crew wouldn’t make too much mess. In low-budget filmmaking you do what you can to cut down on time and money.

Sadly, Alpha Girls really lacks a solid plot or story. I think the writers probably did all they could, exhausting all resources on what is ultimately a super simple story. There are a bunch of issues with the pacing too. Ranging from the early party scene that simply drags on and one, to the unnecessary extended dialogue that soaks up a lot of screen time in other scenes. The entire first act is a lot slower than it should have been, that shouldn’t be noticeable in an 80 minute film, but it was with this one. The suspense scenes and score could have been a lot more effective and the action scenes are few and far between. I think they could have issues with marketing the film unless they change a few things when promoting it. It’s a very campy, light kind of film with no real “horror” it seems a lot more comedic, at least in my opinion. 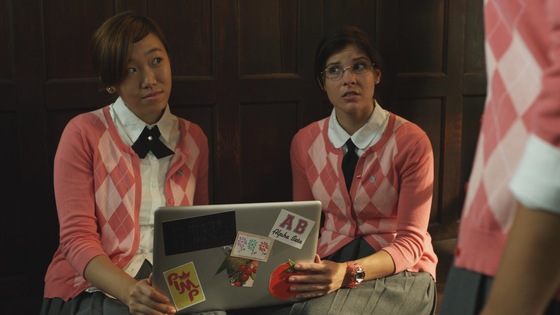 Alpha Girls is a film worth a watch, it has a fun entertainment quality about it but I was hoping for something a little more action/ gore and effects orientated. If you like your cheesy dialogue and some over the top acting in a fun possession kind of flick than there is probably something here for you. I think the stand out in the film is Joslyn, she has the all American girl look and her acting is pretty consistent throughout the film too, I can’t say the same for the rest of the cast. I thought the slit neck gag was a really cool “slasher” element, they did a great job of the makeup but then managed to dampen it with CGI blood spurts. They are normally only used if the crew lack the budget to use practical effects, which clearly here they didn’t  because they created a few cool pieces earlier on, so I’m not sure why they opted for that. I think my expectation for the film was a little different and unfortunately too often it’s just lacking momentum and any real x-factor.