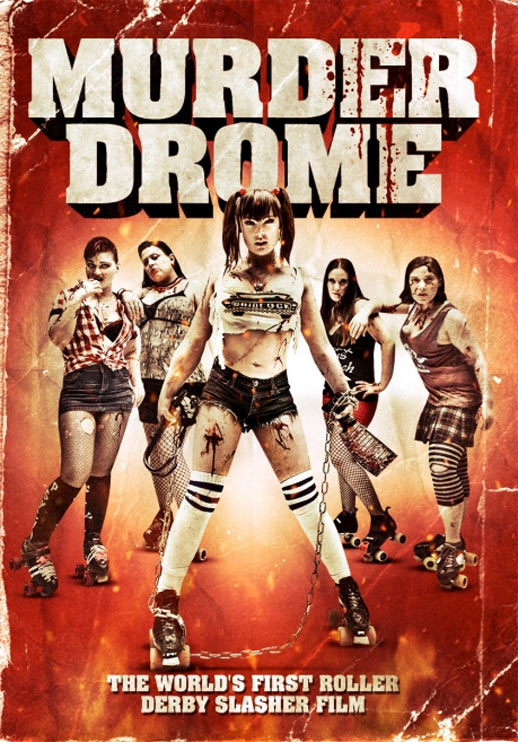 This is a brand new review for what is destined to be an Aussie cult classic film  called “Murderdrome”. It’s written and directed by Daniel Armstrong. It’s a film that showcases the sport of Roller Derby in a Supernatural/Grindhouse revenge flick scenario. Cherry Skye (played by the gorgeous Amber Sajben), is an avid Roller Derby enthusiast. She is given a locket from Brad (Jake Brown), a young man who has taken a liking to her. Brad’s jealous ex girlfriend Hell Grazer (played by Rachael Blackwood) is determined to make Cherry’s life a living hell (pardon the pun haha). What none of the Roller Derby girls and co know is that a malevolent demon who is hungry for human souls has been released from the locket and it’s collection time.

I liked the Facebook page for the film a while back and have been patiently waiting for the Dvd release. It looked to have a Ryan Nicholson’s “Gutterballs” feel to it, with that Psychedelic soundtrack and retro underground feel I was hoping for solid gold and what I got was pretty good stuff.

Firstly will say that I have no idea what the hell this thing was really about (haha) and I don’t care because honestly, it’s just fun. It’s a well written script with enough campy humour and action sequences to satisfy most of its target audience. The camera work is very impressive, some nice swift shots of alley ways and the streets of what I think is Melbourne??, not too sure because their isn’t a location mentioned on the official Imdb page. This is a micro-budget film (estimated budget value is at just $6,000) but it feels like ten times that budget, some really well thought out ways of cutting down on costs resulting in great production values. The girls all look great and the costumes are a blast as well. I really like Amber in the lead role of Cherry. Her personality shines right through and she looks like she is having a blast doing this. These girls all felt very real, I like that they weren’t your obvious beauties in the generic sense of the word. In this environment that wouldn’t have been very realistic so I’m glad they found these really sassy chicks! 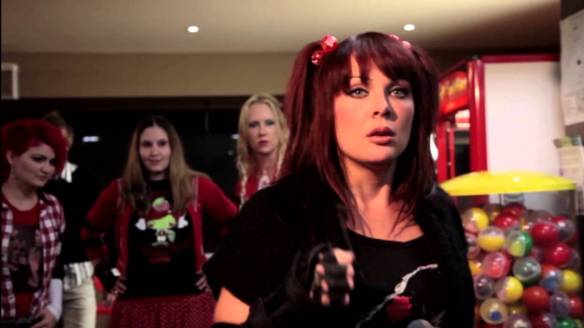 The acting is nothing fantastic but it’s got the right amount of camp value that you can get on board with, the cast and crew are just having a lot of fun with it. I think its more during the emotionally driven scenes that the acting feels a little hollow and somewhat forced but for the most part it’s alright. The soundtrack is worth mentioning too. There are lots of really cool indie/hard rock and psychedelic kind of songs that really fit the structure of the scenes and of course it helps independent musicians get exposure they otherwise wouldn’t have gotten.

The effects in Murderdrome are really fun as well. You get a really cool decapitation scene along with some nice blade incisions, amongst some other really cool deaths as well. I’m a big fan of practical effects though and most of what we see here is CGI orientated. However, due to the extremely limited funds for this project I can see why Daniel and Co. opted for the digital effects and I can respect that.

There isn’t a lot of negativity when it comes to Murderdrome. I do think that the audio could have used a bit of work here and there though. It’s just a little inconsistent in places but having spoken to a few sound engineers and such I hear it’s one of the hardest things to get right. I also found the opening credits and some of the roller derby footage to drag on a little too long. It could have been cut in half, even though they clearly wanted to showcase the sport it does cut into time that could have been spent on a few more action sequences or a higher body count.

Honestly, I wasn’t a huge fan of the supernatural aspect either. I didn’t think it was the direction the film was going to take. Not that a film like this has a lot of logic anyways but some of the details about how and why this is taking place kind of get lost in translation. It’s still a fun idea but I think this almost would have worked better as a roller derby team vs another team revenge flick, and left the supernatural element out. Some of the fight choreography was pretty lame and the heaven/after life sequence didn’t really add much to the equation, but I suppose I’m being a little critical. There is nothing wrong with those scenes they just didn’t do much for me. 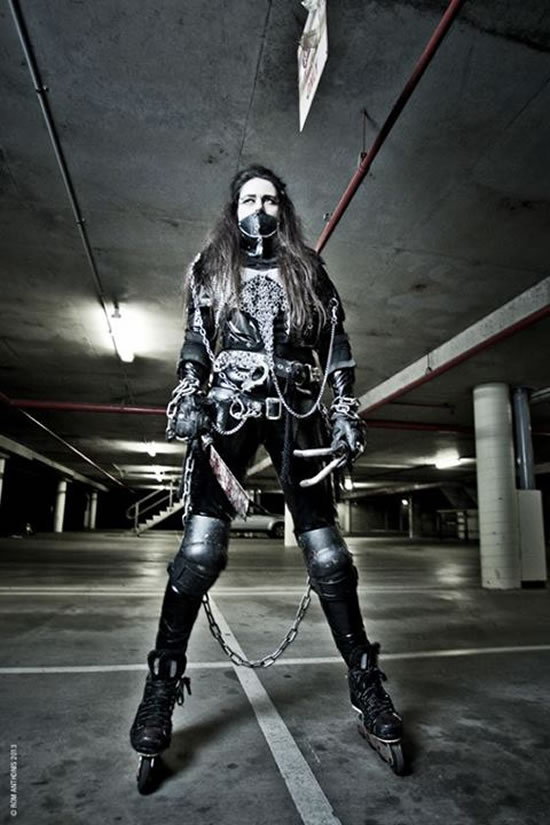 Overall, Murderdrome was a blast. it’s just a really fun messed up kind of film (haha). Like I said, I’m a stickler for details when it comes to sound and of course the effects. In a film of this nature it needs a hard R rating. I think Murderdrome was begging for a higher body count and more brutality. Some of the comedy that falls flat and the few scenes that didn’t enhance the entertainment value, could have been swapped for some more of the red stuff! All in all Daniel and Co. I say well done! you have made a cool little gem of a film with money you wouldn’t have change from after buying a Meat Pie and a Powerade from any “On The Run” (haha) I recommend this film for anyone that wants a good time without having to call the next day, click below and go!