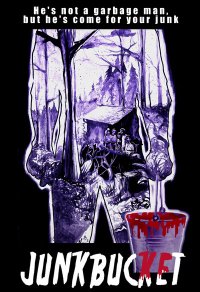 Firstly, I just want to say thanks to Stephen Lange, the writer and director of the low-budget Horror/Comedy film “Junkbucket”. It was released in 2008 but I only found about the film recently. I stumbled across the new poster for the sequel to “Junkbucket” which is due out in 2014. I contacted Steve and purchased a copy of the original film and got my hands on a copy of the sequel, which I will watch and write a review for soon.

Anyways.. Junkbucket. It stars Jessica Aceti, Scott Baxter, Annette Auger, Brian Kirk, Erin Stewart, Shane Regan and many more, including Steve himself. The story follows a group of kids who are heading to Lake Pakajanomo for a weekend of partying. Cassie (played by Erin Stewart) is getting ready to clean out in preparation for selling her parents cabin (I’m guessing they had passed away or could no longer maintain the place for whatever reason… not sure, it’s not that important). All of her friends see it as a bit of a getaway for indulging in drugs, partying and sex! They load up two vehicles and make their way to the cabin. What they don’t know is that a violent bucket headed Mongoloid called “Junkbucket” lives in the area. He’s horribly deformed as the result of an incestuous relationship. His mother cut his junk off when he was young so he would never be able to reproduce. Junkbucket is now on the hunt for revenge by cutting fresh junk off!

So that’s the basic premise for Junkbucket (ha-ha), it sounds completely over the top and non-sensical doesn’t it?? I am here to tell you that it is but it’s good fun. Steve is making a mockery of films like “The Texas Chainsaw Massacre”, “Wrong Turn” and the new English film “Inbred”. I’m sure he is a fan of horror but can also see there’s a lot of fun to be had when you don’t take the genre so seriously. I like my horror as much as the next guy but something a little lighter is a good change of pace.

First, I really enjoyed some of the southern and blues guitar music throughout the film. The entire score is pretty cool, my only criticism is that it’s overused in several scenes. I also found the technical aspects like the camera work and the audio/dialogue levels to be really commendable. I generally think films of a similar budget to this one ( 1 or 2 thousand dollars), suffer in that department. The comedy aspect of the film is a bit hit and miss. A few of the more memorable scenes were the slapstick Abbott and Costello style police officers riding that double seated bike haha. Along with the mentally and physically challenged guy constantly writing “Hello” with his voice computer. Everyone just kept leaving him, that supplied me with some good laughs (haha). That girl who says she listens to everyone, yet talks non-stop was quiet funny as well. It’s probably more the dull and lifeless dialogue that makes the comedy suffer. The general conversation and jokes left a lot to be desired. The practical effects were solid considering the minimal budget. I would have liked to see a lot more gore but I have a feeling I might get that with the new sequel and it’s increased budget.

Junkbucket doesn’t have many issues but I thought the sound effects were pretty loud and overbearing at times. Mixing and editing issues get panned out once someone has more experience. I already mentioned the dialogue does little to nothing in advancing the plot or the character development. To be honest the strongest actor in the film was Steve himself. I thought his storytelling was good and the comedy in some of his scenes was fun too.  I could take or leave the rest of the cast (keep in mind they are all new to acting) but in a film like this you know majority of them will be killed off at some point, so rest easy people.

At a speedy 56 minutes in length Junkbucket feels more like a horror/comedy tv pilot than a full length feature. It’s a good length for how much story the film actually contains and the comedy makes it worthwhile watching. The “horror” and gore aspect needs a bit of work but with an increased budget I have higher hopes for Steve’s sequel. I critique every film the same and this is probably one of the best films that you will see on a $2,000 or less budget. I commend him on a solid first feature film attempt and I think he has a good hour’s worth of fun here. I recommend this to anyone who likes super low-budget films or are fans of real out there horror/comedies. I mean c’mon it’s got people with penises on their faces! it at least wins points for originality!