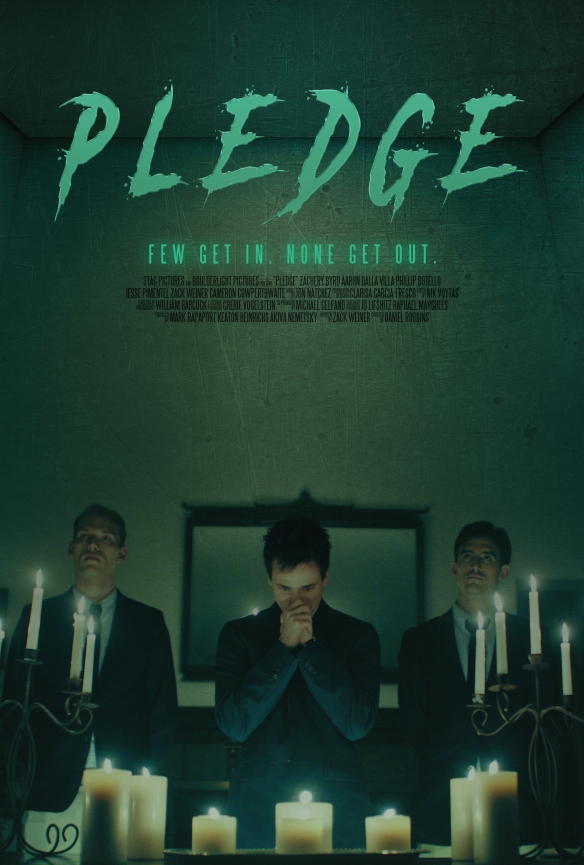 Firstly, I’d just like to start off by thanking Stag Pictures and both Writer/Actor, Zack Weiner and Director, Daniel Robbins for allowing me early access to a screener of the new Horror/Thriller film “Pledge”. Pledge is set in the world of exclusive college fraternities, centering around a trio of freshmen buddies who get more than they bargained for after accepting a private invitation to a swanky party. David (played by Weiner himself), the socially awkward geek and self-proclaimed leader of the group, takes it upon himself to manage rush week for his friends, who include the out of shape, Justin (Zachery Byrd) and shy, Ethan (played by Phillip Andre Botello). After meeting with Ricky (Cameron Cowperthwaite), a suave young guy who belongs to a secret society of sorts, the trio are joined by two other pledges as the night takes a turn for the worse when an impromptu hazing session begins inside the four walls of the house. The film also stars Aaron Dalla Villa, Jesse Pimentel, Joe Gallagher, Jean-Louis Droulers and Erica Boozer.

From the moment Pledge started, it immediately called to mind something like Tyler Shield’s “Final Girl”, a criminally underrated thriller from 2015 that followed a unique girl and her violent encounter with a group of sadistic teens who hunt and stalk for entertainment. Pledge’s content and setting are vastly different to the aforementioned and are perhaps more likely to draw comparisons to similar films set in the world of brotherhoods (even the film Brotherhood for that matter haha), still, I couldn’t help but feel that same sense of impending dread when it came to this one. It’s quite hard to believe that this is DP, William Babcock’s first time shooting a feature-length film. Weiner and Robbins could have easily resorted to just dulling the image, or washing it out completely in the hopes of pairing the films rather bleak content with matching visuals, but they didn’t. Pledge is a gorgeous looking film with superb framing, evident in the lingering drone shot that opens the film, slowly closing in on a young man whose running through corn fields like his life depends on it. The same sequence than transitions into some really smooth tracking shots and ultimately finishes on a brief but shocking beat. A majority of Pledge takes place in a gorgeous isolated home, making for an elegant backdrop to a subject matter that is anything but. There’s a lot of nice zooming and pulling back with the camera, as well as a few jib shots and some effective slow motion. The audio track is clean and the sound design is aptly built around bass and discordant noises. Jon Natchez’s fusion synth score deserves plenty of attention too, especially that opening track. It’s 80’s in nature but suspenseful, consisting of more dramatic tones rather than just pure energetic electro/pop for the sake of it.

Zack approaches the material with a level of maturity well beyond his years. Nothing feels contrived, as he’s seemingly always got one foot firmly planted on emphasising the mentality of the alpha male and the dangers of conformity. The combination of Robbins directing and Nik Voyta’s edit, help to authentically encapsulate pack mentality and it makes for destructive viewing in the best way possible. Pledge is very well acted right across the board. Our protagonists all possess different qualities that make them either relatable or likeable, sometimes even both. Weiner’s got smart comedic timing and you can’t help but feel bad for David during his desperate times. As for Byrd, playing Justin. We all know someone like that, he’s the level-headed friend whose easy to root for when the going gets tough. I was trying to work out how I knew Phillip Botello and eventually I realized it was from the recent indie horror, “Minutes To Midnight”. While I didn’t care all that much for the film, his performance was a good one, as it is again here. Ethan’s that guy that’s almost one of the click but not quite. There’s a separation preventing unification and no one really knows why. On the other end of the spectrum we’ve got kingpin Max (Dalla Villa), a young socialite with a sadistic persona who ultimately leads the charge when it comes to the fun and games. It’s a controlled, less is more style of portrayal that works perfectly for the character. Second in command is Ricky. Boy does Cameron bear a striking resemblance to IT actor, Bill Skarsgard, wow. I liked a few of his specific traits and the overall direction of the arc. The duo’s muscle comes in the form of the overly eager, Bret (Pimentel), who happens to look a hell of a lot like American Horror Story’s, Cheyenne Jackson. The script has some nice surprises, such as not revealing certain motives as early as one might expect. That and the character of Ben (Gallagher) makes for an interesting inclusion. Pledge is unapologetic and fast paced at just 76 minutes, that and it pulls no punches with its darkly violent finish. And when I say dark, I mean dark…

If we’re being particular, one might question why this seemingly smart group of three fail to even ask the most basic of questions when it comes to the fraternity and its essentials. I guess we’re supposed to believe these young men are rather naive, which is fair enough, but if a beautiful girl invited me to a private gathering (looking the average sort I do), I’d be a little suspect, yet no one raises an eyebrow even for a second. The idea behind the concept of a fraternity has never made much sense to me, nor does it appear to hold much weight. I know I’m foreign and we don’t have those factions here but what values are they supposed to instill in you that can’t be attained by other means? All you tend to hear about is the degrading nature of the bullying which comes in both physical and psychological forms. I’m a non drinker and I’m not a “guys” guy either so that’s probably me out (haha). The only other specific of Pledge that could’ve been handled a little better was the twist of events. The reveal is plausible enough but perhaps dueling storylines might have cleared some things up, or at the very least Weiner could’ve thrown in a few extra clues along the way.

Zack Weiner and Daniel Robbins Indie/Thriller “Pledge” is a film that I’ve been hearing a lot about over the last couple of months, and with good reason. With shades of “The Skulls” and the previously mentioned “Final Girl” about it, and a visceral gut punch finish akin to Jeremy Saulnier’s “Green Room”, Pledge is a masterclass of gritty independent cinema. Babcock’s exquisite cinematography complements the surface value appeal in the world of these young men, Natchez’s synth driving soundtrack works wonders and the sound design is tension filled. Zack’s writing is strong, the acting even better, and given the juvenile characters that occupy the landscape, that’s a difficult balancing act. The pacing is great, and while the violence is limited, it’s still ruthless. The freshmen’s lack of ability to think for themselves remains the catalyst in setting these events in motion and that might frustrate viewers, given that outwardly they look to be more switched on than most. The twist could’ve been further explored, but in the end it doesn’t take much away from what is sure to go down as one of the best independent films of 2018. Pledge is fantastic and I urge you to check out the trailer below and keep an eye out for the film soon!