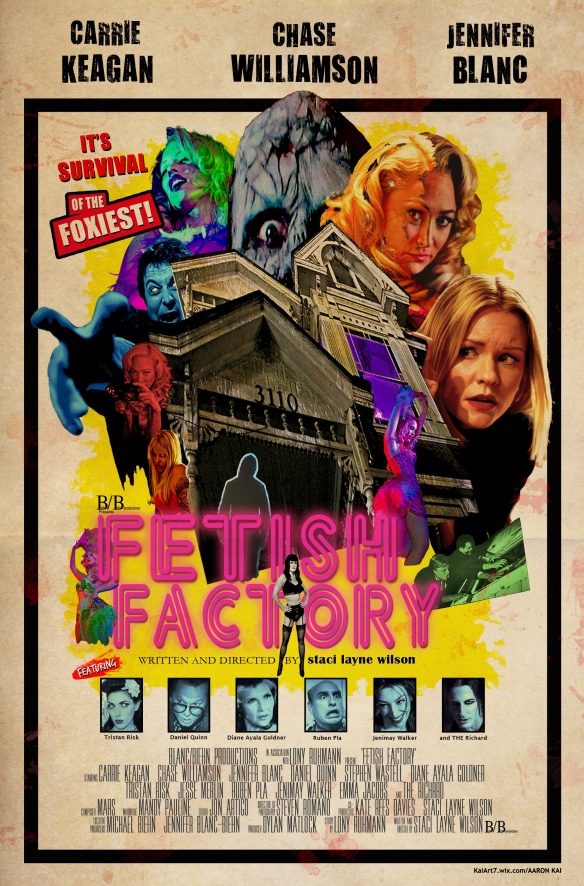 Firstly, I’d just like to say thank you to Writer/Director, Staci Layne Wilson for allowing me early access to an online screener of her Horror/Comedy film, “Fetish Factory”. Fetish Factory is an exploitative style, horror/comedy that pits a group of burlesque/pin-up girls against bloodthirsty zombies on the night of a terrible storm in LA. The fetish factory is a private club owned by, Irma (played by Diane Ayala Goldner of “The Feast” Triology), where patrons come to have their very specific needs fulfilled. Bettie (the stunning, Carrie Keagan of “The Fiance”) *see review* https://adamthemoviegod.com/the-fiance/, and her co-workers, Jayne (played by Jennifer Blanc-Biehn from “Among Friends” and “Treachery”), Tristan (Tristan Risk from “American Mary”), Rosie (Jenimay Walker) and new girl, Suzie (Emma Jacobs), prepare for the busy night ahead of them. As the show comes to a close, a sudden zombie uprising occurs, sending the night into complete mayhem. The film also stars Chase Williamson (The Guest) and Richard Cardinal as “himself”. Wilson writes articles, reviews and conducts interviews for popular Horror website, “DreadCentral”. She recently forayed into the writing/producing and directing side of film. As far as I understand it, Fetish Factory was a bit of a passion project of Staci’s. Her mother used to be pin-up girl of sorts back in her heyday (or so I’ve read), so this one is kind of a love letter to that. Fetish Factory is Wilson’s first time directing a feature-length film. 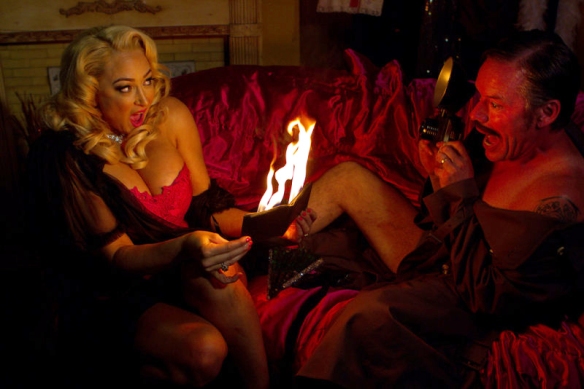 I really dig the 70’s influenced, retro poster art and the lettering design for the film’s title. The film is in part a throwback to exploitation films of the 70’s (minus the graphic content), but its main focus is on the experiences of the pin-up girls, their routines and the fetishes they appease. A majority of the cinematography albeit simple, looks nice. On display are a series of still shots and solid Steadicam work, everything framed squarely. There’s some decent establishing shots of LA in the beginning while Bettie makes her way to work. The sequence ends with a lovely shot of actress, Carrie Keagan’s rear end, which is rather nice (and I’d be lying if I said that wasn’t a highlight). Even Wilson’s inclusion of some old burlesque performances and dancing footage made for a nice touch. The dialogue audio levels are a little inconsistent but given the various room tones, it’s mostly fine. The soundtrack and score are really quite diverse here, there’s even a couple of life performances within it. I enjoyed the grindhouse theme in the beginning from “The Ventures”, and the live piano ballad played by one of the girls in the factory was something new and different as well. There’s plenty of instrumental rock music in the score, some of which is good too. My favourite aspect in Wilson’s writing is her appreciation and knowledge of countless film trivia, specifically in the Horror genre. There’s a number of cool references throughout Staci’s script, most of which come rolling off of Bettie’s tongue and that’s where the film is usually its strongest. I don’t know how much Keagan herself actually knows about film, but I’m sure that coming from a journalism background, she knows her stuff pretty well regardless. It’s not all just a tip of the hat to George Romero here either, there’s plenty of obscure nods and they’re all a lot of fun. Some of the other dialogue also flows naturally, especially when it’s just the girls with their banter and small talk.

Being a guy, I’d say the obvious reason one would watch Fetish Factory is for the array of gorgeous women and their assets, particularly because these girls are all natural (something you rarely see these days). Let’s start with Carrie because I enjoyed her performance in the aforementioned, “The Fiance”. This time she’s given a little more to do , starting with some nice voice over/narration which she can now tick off her bucket list. She looks absolutely stunning in this one and spends most of her screen time in a black corset type of deal. Jennifer is another welcome addition to Fetish Factory, her curled hair definitely wins best “do”. Jayne, wears revealing pink and red outfits that showcase Blanc’s curvaceous figure, and she looks great. Then there’s Tristan Risk, whose work I’ve enjoyed since “American Mary”. I’m very much looking forward to seeing her in the upcoming, “Frankenstein Created Bikers”. Risk is in great shape, as should be evident in a couple of her racy dancing numbers. Both, Walker and Jacobs (who can be seen in the above image) round out the group of vixens perfectly, each having style, sex appeal and plenty of curves (superficial of me to say I know, but unfortunately that’s the way of the world). The performances are consistent enough taking into account the campy nature of Wilson’s script. Risk is steady but she doesn’t get much dialogue, it’s mostly left to Keagan and Blanc who end up carrying the film. Goldner’s, Irma is quite hammy with the delivery, probably because the whole scenario needs to be that over the top, but it does get to be a bit much. Walker and Jacobs are okay but they’re just passengers and Chase Williamson is really the only male that makes any sort of imprint (minus Cardinal, whose pretty funny playing himself). The zombie makeup effects were nicely detailed, but the spotty vfx used on the eyes were amateurish.

Fetish Factory is a reasonably polished product for a debut feature-length film, but it’s not without its technical faults and the low-budget is evident at times. Ninety percent of the film is set in the one residence coined the “Fetish Factory”. Wilson opts to keep things short and sweet so the cinematography never gets stale, or the film boring. There’s a handful of frames that are out of focus for a second or two inside the girls change room toward the beginning of the film. On several occasions the camera pulls focus mid shot, almost as if the DP is trying to find the appropriate length for the sequence and it’s a little off-putting. Not all the sound and music suits the intended tone either. For one, the electric funk stuff only serves as background noise, in turn making Fetish Factory feel more like a soft core porn parody than a serious film. At times, the sound effects seem disconnected, having a sci-fi or other worldly feel about them instead of what you’d expect to hear in something like this. There’s really only one go to as far as transitions in this film are concerned, and it’s usually an obligatory shot of the sky amid change. In hindsight, I assume that was being referenced because a storm was supposedly meant to hit (I vaguely remember a character mentioning it) but there’s never any rain or noise coming from outside. The origin of the zombie outbreak was never really established, some half-baked exposition just tagged on toward the end. If the storm was relevant to the zombie outbreak it would’ve been nice to have seen some evidence of that outside. I honestly just thought the continuous sky view was being used to shift between scenes.

The synopsis for Fetish Factory had me thinking I was in for a very different movie to the one I actually got. I was led to believe this was going to have sex, violence and humor, usually the three key selling points of Horror (non paranormal related horror of course). Even with Wilson offering up numerous film references and fun parley, for the most part the jokes just fail to land. Irma’s recurrent comedy routine before each new girl is presented to the stage, never really works. It may have been the intention to write it that way and have her rattle off lame jokes and bad puns to go hand in hand with the fetish element, I just didn’t find it funny. The girls acts aren’t all that special or scintillating, and no I don’t just say that because the film doesn’t contain any actual nudity (even though that would have been a plus), it’s more that the film would have benefited from an increase in action. I’m not going to say those people with particular fetishes are strange, we each have our “thing”, its human nature. I just couldn’t relate to it, especially once the montage began. There’s several scenes of men getting with their respective ladies to indulge and I was just disinterested through those scenes. I was sitting, patiently waiting for the horror aspect to kick into gear and I realized eventually that it was never really supposed to. There’s a couple of off-screen kills and some splashes of cheap blood but the action is insufficient, at least to warrant labeling this a horror film. The final act goes for more of a profound and emotional impact but the cast don’t really have the ability to pull that off and the writing hasn’t given much to back it up with.

Fetish Factory was a film I heard about over twelve months ago after doing some research on various films from Blancbiehn Productions. Burlesque dancing has never really interested me but I’m usually willing to give anything a go and this one definitely had potential. The poster art is really cool and the running time is a speedy 69 minutes. The shooting style is nice and smooth and Wilson makes the most of just the one location. I enjoyed some of the rock music especially the grindhouse style theme from, “The Ventures”. Wilson’s knowledge of all things film is rather impressive (would love to take her on in trivia, although I’m better with modern film haha) and she’s got a way with dialogue that will surely benefit her in future projects. I like the film references and the chemistry of our lovely group of ladies. The performances are pretty consistent and I enjoyed watching these girls, particularly Keagan (wow just wow) but Blanc and Risk as well. This type of zombie makeup is clearly a nod to Romero and it’s done well, it’s just a real shame there’s no action. There’s definitely a few technical issues and some odd choices creatively speaking, in regard to the music and editing. There’s not a lot wrong with the content in the film, it’s more how I saw it marketed (only my opinion). The entertainment value will be determined by your interest in performance art and fetishes, more so than zombie related carnage. Fetish Factory feels like a cross between “A Darker Fifty Shades: The Fetish Set” and “Burlesque Massacre” , neither of which were great films and unfortunately this wasn’t what I expected. I commend Staci on her move to writing/producing and directing and wish her luck for future projects, of which I hope to check out. There’s definitely a target audience for this one it just wasn’t what I wanted it to be, check out the trailer below and the official release date will be coming in 2017 if you’re interested.