Here it is, the much-anticipated horror/home invasion flick “Mischief Night” directed by Richard Schenkman (Director of the romp that was “Abraham Lincoln vs Zombies”. I found out about this little independent film six months back now and I read that the writer of the film was Jesse Baget. A lot of you wouldn’t know who he is but he was the director of one of the best films of 2012 titled “Breathless”, it was a crime/black comedy in the vein of “Fargo” and “Blood Simple”, I loved it! Once I found out he had co-written this script I was very intrigued to see what he could do in the horror genre. 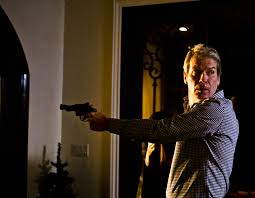 “Mischief Night” is a film about a young teenage girl Emily Walton (played by Noell Coet) It’s about her experience trying to survive an intruder on Mischief Night. Emily has been blind ever since the car crash that took her mother’s life 10 years ago and left her severely scarred. She lives in a new house with her father David (Daniel Hugh Kelly), she also has a steady boyfriend named Jimmy (Ian Bamberg). She has been in therapy for the last ten years and is starting to make some progress but her instincts are put to the test when she is pursued and stalked by a mysterious assailant on Mischief Night (basically like Halloween night) 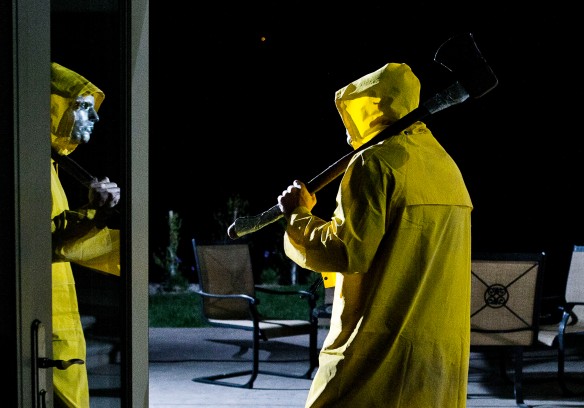 It was always going to be a tough ask in a year that’s given us some of the best home invasion films in years. The Purge, You’re Next, Static and Home Sweet Home were all successful and released before Mischief Night. Firstly the best thing MN has going for it is our heroine character of Emily. The decision to write her character as being blind was a unique choice. I think that gives the audience a real insight into the fear and panic someone in her position would have. I know even with all my senses, if I was being stalked I would be terrified so I can imagine how Emily would feel. It’s a really solid concept for a home invasion movie. The camera work is very smooth, there are some really lovely shots throughout the house. It’s pretty much a one location film and Richard takes advantage of that in itself. I thought the dialogue and audio levels were also very nice and crisp. The acting for the most part is commendable too. The shining light though is most definitely Noell as Emily. I wouldn’t be surprised if she spent a considerable amount of time studying blind people and their actions and movements because she nailed it. There was only one scene that seemed a little convenient and took me out of it for a second, other than that she was wonderful.

Noell really reminds me of a younger Agnes Bruckner cross with Mila Kunis type of actress. She has a lot of screen presence, I really hope this kick starts a long career for her. Daniel Kelly as David supports Noell really well. The chemistry as father and daughter is really natural, I didn’t find any of their interactions felt forced and that’s not always the easiest thing to portray. The overall pacing of the film is nice and there is a few good suspenseful scenes in the second half of the film. I have to make mention of the cover art for the Dvd. I was expecting to see the masked assailant in a hoody like you would expect from looking at the cover, not really sure why he was wearing a rain coat? considering it wasn’t raining, not sure about that one!

There aren’t too many bad things to say about MN. I thought at times the lighting in the house was a little off, probably more of a budget constraint or positioning than anything else. I also thought the acting in the opening segment with Charlie O’Connell and his girl was a little flat. It was probably more the characters actions and reactions and the lack of suspense that killed the opening for me. Richard could have played with the audience a lot more with the cat and mouse aspect, sadly there wasn’t even any visual payoff with the opening death sequences. This could have been on purpose to not give too much away about the events that follow, I don’t know. You get the cliché women running ever so slowly down the stairs waiting to be killed… that’s not realistic, even for a movie of this genre. The same with David continuing to leave Emily on her own while he goes off and investigates??? Is it just me or does it not make sense, to leave a blind girl on her own with a killer in the house?

There were a couple of fun action sequences involving a knife and a kind of chainsaw. I personally am a gore hound so I was hoping for a lot more but I’m pretty sure that wasn’t the intention here, so I can accept that. A few more gory kills and higher body count would have just added to what was already a very entertaining little film. Mischief Night is exactly what I expected it to be, an entertaining home invasion film. I liked the ending with a nice touch and little twist in the final scenes. It’s strongest aspect is Noell’s great performance and some of the interactions between father and daughter. Sure, it’s a little predictable but so are all of these kinds of films, I think this one is on par with some of 2013’s other home invasion films. I liked the creepy masks but I can’t help but see the glaringly obvious similarities between these and the masks in both “Vacancy” and David Morlet’s amazing “Home Sweet Home”, the crew could have gone for something a little different. For those of you that dig these type of films this is one that you want to get your hands on none the less!