“Intruder”, not to be confused with the 89′ slasher film of the same name, is the latest in a wave of Horror/Thriller home invasion films. In recent times we’ve had the aptly named “Home Invasion”, “Static”, “Mischief Night”, as well as the impressive “Home Sweet Home” and Mike Flannigan’s fantastic entry, “Hush”. Intruder was Written and Directed by Travis Zariwny (Cabin Fever and Scavengers) see the review for Cabin Fever at https://adamthemoviegod.com/cabin-fever-review/. Intruder is set during the night of one of Oregon’s heaviest storms. Elizabeth (played by Cabin Fever’s, Louise Linton), a young withdrawn cellist, is settling in for the night and hoping for a relatively uneventful evening. Little does she know the safety of her apartment has been jeopardized by a hooded intruder. The film also stars John Robinson, Moby, Zach Myers and Teresa Decher. Having just come off the aforementioned Hush, a film that left a long-lasting impression on audiences, I was equally as excited to see Travis’s latest film which I’ve followed for over 12 months now.

Zariwny’s screenplay is pretty solid and suspenseful in most of the right places, albeit treading over familiar territory. It should come as no surprise though when you look at everything that’s been done in the home invasion sub-genre through the years, originality isn’t exactly the selling point. That being said, if you’re a huge fan of the genre (much like this reviewer) you won’t have trouble getting on board Intruder. I enjoyed the fact that the story took place during a storm, it was a nice touch with the sounds of the storm aiding to the soundtrack in a natural way. I for one hate Winter, all you want to do is get home from work, get into the warm and cozy up with a good book or movie and a cup of Joe, exactly like Elizabeth does. Problem being, she’s not alone. We know it, she doesn’t. Imagine if you were in those shoes…. creepy stuff. The audio track is nice and clear and Travis sets the tone early with some really resourceful shot choices, continuing to play with depth of field inside Elizabeth’s apartment. The viewer is the voyeur, we can almost always see the actions and movements of the invader but the point of it all remains a mystery. The shower sequences are among the best and the mysterious stranger’s gall to lurk inside Elizabeth’s bedroom while she’s in it too. I thought their approach to lighting the opening sequence worked well. You’ve got heavy rain, flickering lights and reflections in wall coverings. Made even more atmospheric by clever placement of white light and dark shadows. As the story moves to the apartment, a lot of the rooms are lit with a yellow tinge which changes the look completely, really cool stuff. The music is probably the key component that drives the tension in the film. Early on there’s a fair share of sharp sound effects to go hand in hand with the mostly classical score, the opening piece of music is a wonderful bass and violin track.

From there, we’re introduced to Elizabeth who we see practicing her instrument in a dark and vacant theater. The plot point of her being involved with the philharmonic was a good one. It’s the most important aspect of her character arc and you can see why the soundtrack is so heavy on orchestral themes. I’m not really interested in the style of music but it fits the film perfectly, reminding me of a Hitchcock or Polanski film, even something from Brian De Palma. Linton recently played the iconic character “Deputy Winston” in Travis’s remake of Eli Roth’s “Cabin Fever”. I was actually looking forward to seeing her again, she did her best in CF but it’s hard to imagine anybody else other than Giuseppe Andrews playing that character. She delivers a fairly even performance as this gifted musician but doesn’t really ever have to push herself to any great lengths. Myers is serviceable as “Justin” but the character doesn’t project a lot (maybe written that way) and Robinson’s, “John” is quite layered, although not all those layers get peeled back. Moby plays a slimy and volatile music teacher, he’s underused but delivers an unsettling performance in his few scenes. This one is definitely a slow burn and while it’s not heavy on the action, it still presents you with some interesting plot points along the way. Aside from the introduction, a memorable opening that sees a young woman (played by Decher) being stalked while she’s home alone, there’s little in the way of conflict until well over half way in. The moves our hooded assailant makes are always subtle and much more realistic than what you’re used to seeing in these types of films. Ornaments are moved, food and drink partially spoiled, all little things one wouldn’t notice unless suspicious, things he or she clearly gets a thrill out of doing.

In regards to the camera work, there’s a few frames that appear slightly out of focus and some of the framing during character interactions was closer than it probably needed to be. While most of the lighting looks great, the scenes in Elizabeth’s bedroom when she’s sleeping lose something and could have been darker to gauge better suspense. I don’t know anyone who can sleep with that much light, making it that bit harder to believe a stranger could be sitting at the end of your bed without you becoming aware of a presence. The overall volume of the music is quite loud too. It just needed to be softened and a little more subtle in the mix, especially considering every time something remotely suspenseful happens, there’s musical cues. Normally that’s not something I take issue with but when you correlate every stage of progression with sharp sound prompts, it loses its impact. As I stated earlier, Louise gives a decent performance as our principal character but there’s definitely a few moments of inconsistency. I don’t know if I put that down to an uneven accent, or just stiff line delivery but I noticed she went from sounding English, to Australian, to American. I apologize if that’s just a natural thing but I found it a little distracting. 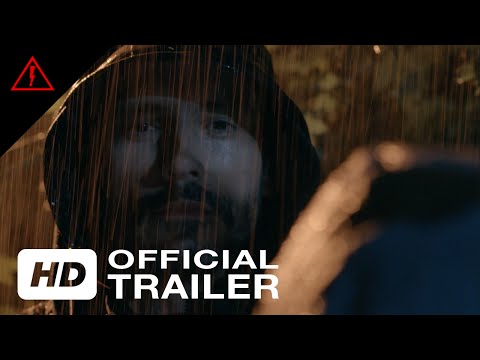 The problem I had while watching Intruder was that it reminded me of one of my favourite home invasion films, “388 Arletta Avenue”. Not really in terms of presentation (given that the latter was presented as hidden camera footage) but more about where I feel the bar is set for these types of films. Intruders feels like it plods along in patches and loses some momentum. It starts out strong but tapers off during the middle act and I think for that reason impatient viewers might get bored. I’m certainly not impatient and I do like a good slow burn approach, however, if I take into account the final revelation and the way it plays out, I can’t help thinking it could have escalated quicker. Unfortunately that major reveal you’re hanging out for is pretty stock standard and you can see it coming half way in. There’s no real confrontation or showdown to speak of, instead, Zariwny opts to let the cat out of the bag point blankly. It was disappointing that the final unveiling wasn’t even really an unveiling, because by that time the audience has already seen who the intruder is. Given the story’s slow development, the ending needed to pack a bigger punch than it does.

Intruder makes for an intriguing premise that unfortunately doesn’t quite live up to its full potential. Travis’s screenplay is decent and a majority of the technical aspects are well conceived. There’s some good personal camera work on display, consistent audio, atmospheric lighting and a good mix of classical music combined with suspenseful themes. Both Robinson and Linton share the load, with Moby doing good work on limited material. The opening scene was extremely effective and help set the tone for the main story. The intruder’s psychological game with Elizabeth plays out quite realistically. Using subtle moves, Travis flirts with our voyeuristic tendencies as we watch the intruder make themselves perfectly at home. Some of the particular shots and bedroom lighting missed the mark and the music track was a little overbearing. The main thing working against Intruder is that it’s slow and fairly predictable, plus the underwhelming ending leaves things feeling flat. I like these types of films a lot but those of you looking for a big payoff will probably be sorely disappointed. With that said, it’s still a cool indie flick that’s worth a look late on a Saturday night.