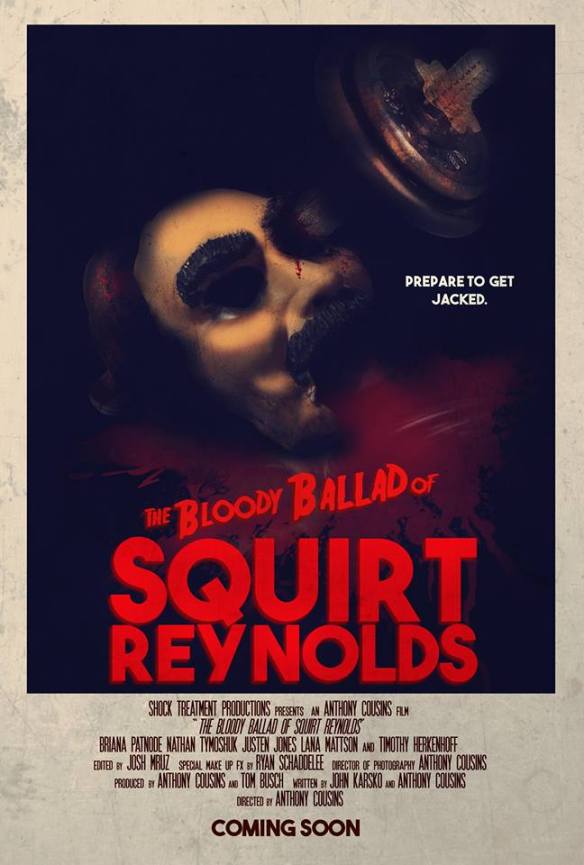 THE BLOODY BALLAD OF SQUIRT REYNOLDS

Firstly, I’d just like to say thank you to Shock Treatment Productions and Co-Writer/Director, Anthony Cousins for allowing me early access to a screener of his 7-minute Horror/Comedy short, “The Bloody Ballad Of Squirt Reynolds”. The film opens with a group of young adults sitting around the campfire at Camp Nawgonamakit (get it). Whilst busting out a keyboard number, one of the guys opts to tell the tragic tale of a camper by the name of Squirt Reynolds and the night takes an interesting turn. The film stars Nathan Hoffman, Daniel Hoffstrom, Justen Jones, Lana Mattson, Briana Patnode, and Tim Herkenhoff.

I can honestly say, if nothing else, The Bloody Ballad Of Squirt Reynolds is hands down the most bizarre film title of 2018. As soon as I heard about it I had to get onto Cousins so I could check it out. Anthony has made a few shorts over the last couple of years but initially began his journey as a cinematographer – now having over twenty credits to his name. It’s obvious that Cousins is an old-school slasher fan and he clearly had no qualms about serving this up as a self-aware parody to one particularly common genre movie trope – the obligatory campfire scene. Fog lacing the air, the musician leading the storytelling (a clear nod to Madman), and whispers of a bullied and now disfigured killer roaming the area, all the aspects we know and love are on display in this speedy 7-minutes. It’s nicely framed, the audio is good, and the acting is intentionally campy but it works. I really like how Tim Holly’s score plays like a real-time soundtrack, performed by the lead actor (I can’t recall his name). There is an acoustic guitar song and some sporadic synth notes intended to highlight the endless musical cues, which can be heard in most films from the genre. The film has a memorable and entertaining sequence of closing shots utilizing some sweet practical effects.

Unfortunately, Josh Mruz’s edit leaves a little something to be desired. To be fair, it’s probably the combination of Anthony’s uneven Steadicam method and a number of quick cuts that end up making certain moments feel a bit cheap. No one appears to be credited for special fx (at least not according to IMDb), leading me to believe that these were perhaps done by other members of the crew. If so, it would explain the unevenness. Whilst the final kill is distinguished and aids to the film finishing on a high, the other deaths are dull and the remainder of the fx appear to be lacking in quality and detail (it might have been due to budgetary constraints).

The Bloody Ballad Of Squirt Reynolds is a stupidly memorable title and a helluva a lot of fun. It calls to mind details likened to those in both “Madman” and “The Burning”. The setup is one most of us know and love, the framing is good, the performances are fun, and Holly’s entertaining play as you go approach to the score is a fresh inclusion. I enjoyed the ending but the kills and special fx leading up to that aren’t anything to write home about. I would’ve preferred a slightly more cinematic feel to the presentation and a tighter edit as well. That said, slasher fans and horror/comedy fans alike best check this one out because there’s plenty of fun to be had. Check out the teaser trailer below!

My rating for “The Bloody Ballad Of Squirt Reynolds” is 7.5/10