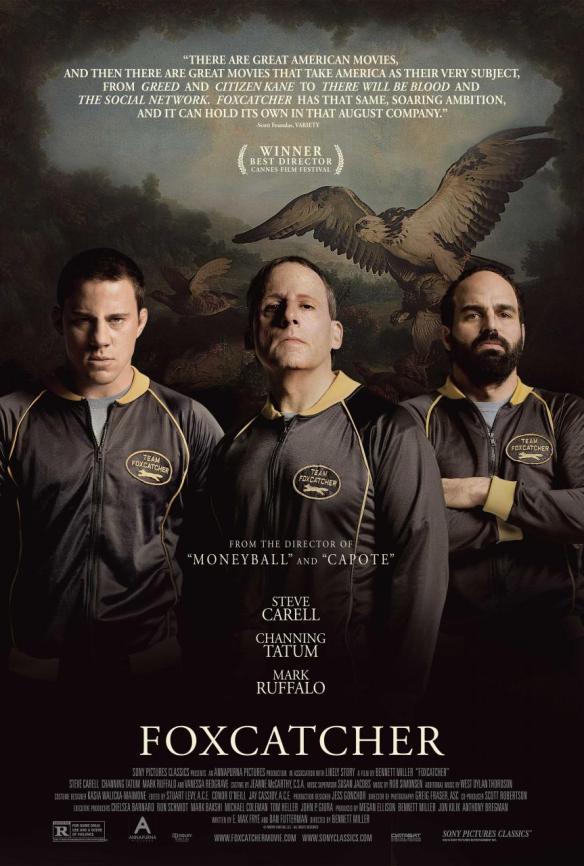 “Foxcatcher” is the much-anticipated true story of John Du Pont, a multi millionaire philanthropist and all around Renaissance man and the relationship he forms with brother wrestling pair Mark and Dave Shultz. As Mark prepares for the 1988 Seoul games, John’s manipulative personality pushes the trio to boiling point. The screenplay was adapted from the book which was written by Mark himself. It’s directed by Bennett Miller (“Moneyball” and “Capote”) and stars Channing Tatum, Mark Ruffalo and Steve Carell. I had the opportunity to see this before its official release date and it’s one of those films that I built up so much in my mind it was probably always going to struggle to reach the height I expected. How does it shape up against the other drama’s of 2014? Find out.

Let’s talk about the extremely risky decision made in the casting of Channing Tatum as Mark and more importantly Steve Carell as John. Most people are used to Tatum playing this hunky/heart throb type of character, taking his shirt off, dancing and basically acting a lot younger than he really is. The success of the movie largely rests on his shoulders, Mark is the protagonist and your along for his journey and you have to be sold on those feelings of failure, disappointment and resentment that he has throughout the film. I think Channing really conveys Mark’s vulnerability and those characteristics that probably drew John Du Pont to him in the first place. This is Channing’s best work by a long shot and I feel much better knowing he can handle a serious role because he was cast in Tarantino’s new film “The Hateful Eight” which I’m really excited for. Mark Ruffalo plays Dave the older of the two and the more well-known amongst the wrestling community. Dave sees himself more as the teacher but seems to have the respect of just about everyone he meets and I’m not sure he is entirely aware that Mark feels inferior and that nothing he does is good enough and that he will always remain in his brothers shadow. Ruffalo has put in some pretty solid performances over the years and he does what’s required of him here but his character isn’t fully explored and the acting highlights aren’t there.

I need to start a fresh paragraph for Steve Carell. Wow, To the skeptics out there and those of you who said Steve Carell was typecast and could never pull off a serious dramatic role you might end up with egg all over your face! I don’t know a lot about the real John Du Pont but Carell’s timing and delivery is fantastic and must surely put him in the running for an Oscar nomination this year. Combine the subtle hints of underlining psychiatric issues and that amazing transformation into making him look like the real John and you have yourself a winner. He makes for a very interesting character study and it’s very odd because a lot of the people who knew him said he must have been insane at the time of the crime because it was so out of character for him. He was known and respected throughout the community and nobody seem to know that he had these issues with alcohol and drugs, amongst other mental problems. A lot of the details about him aren’t fully explored at length in the film, which spends most of its duration focusing on the dynamics of his relationship with both brothers, Mark in particular.

From the very opening frame this has some wonderful shot choices and some lovely cinematography. There is a real focus on showing the intensity and work that goes into becoming the best at something and that’s reflected in the style in which the sporting scenes are shown. The transition from scene to scene is really neat and it never lingers on any one thing for too long. Sometimes the camera is stationary while the actors move in and out of frame and I really like that. The score sets a particular mood right from the outset and minus a couple of oddly placed songs, it accompanies the tone of the film very well. There isn’t any one scene that stands out in the film as most important but the essentials of their lives are depicted. On one side of the coin you have the competitive nature of these two brothers, one who has nothing except for a dream and the other, a family man well-respected by those involved in the sport trying to teach his craft to others. John on the other hand comes from a very isolated lifestyle and seems to have been raised by a somewhat vacant and disillusioned mother who doesn’t seem to really know her son. At heart, I think this is what the entire film is about. John trying to prove his worth to his mother in order to connect on some level with her, or with anyone for that matter. It’s a sad story about a lonely man who appears to have everything but in reality has nothing. Comparisons can be drawn between John Du Pont and Jay Gatsby in their search for love and acceptance for who they really are.

There aren’t many issues with Foxcatcher but the biggest one is the pacing. It’s a combination of the fact that this is based on a true story and therefore I think most of this is exactly what happened. A few scenes get a little bit tedious and one involving some drug use in a helicopter on the way to a dinner party seemed out-of-place. Other than conveying John’s issue with drugs (which could have been in any other scene) it served no real purpose. The comedy in said scene was awkward and not all that funny either. Speeding up the middle act and cutting the entire running time by 15-20 minutes would have just tidied the screenplay up a little bit.

The only aspect I found fault in was that nobody noticed John’s decline and increasingly odd behavior. His mannerisms and a few of the seemingly insignificant things he wasn’t happy with and had to vent about surely would have raised alarm bells with someone in his life?? Then again, maybe not because things unfolded as they did and don’t seem like they were ever going to be avoided. I would have liked to have known more about his issues with Drugs and Alcohol because other than one celebratory scene with a few to many glasses of wine and that helicopter flight, I wasn’t even aware he had any real problem with those two things. He drinks a few times in the film but no different to most people.

Foxcatcher is such a well made movie that accurately depicts the true story of a lonely man and his eventual psychological breakdown. The performances are fabulous and alone are worth the price of the ticket. It’s richly shot and edited, sounds great and the makeup team did some of the best prosthetic work since Clint Eastwood’s “J Edgar.” Although it is a little plodding and lacks full disclosure containing a clear-cut motive that some audiences need, it remains one of the best drama’s of the year, catch it in theaters from January 15th!