Firstly, I’d just like to say thank you to Patricia at Chicart Public Relations, along with Writer/Director, Stellan Kendrick for allowing me early access to an online screener of his 4 minute Horror short, “Goodnight, Gracie”. Goodnight, Gracie sees 8-year-old, Gracie (played by Caige Coulter), a true believer in god, awaken to a loud bang downstairs late one night. With flashlight in hand, she approaches the top of the stairs, where below, she witnesses the shocking murder of her mother (Zoe Simpson Dean) at the hands of her stepfather, Billy (Courtney Gains of “Back To The Future” and “The Funhouse Massacre”) *see review* https://adamthemoviegod.com/the-funhouse-massacre-review/. 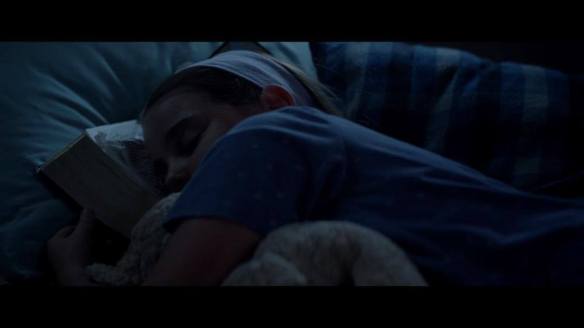 Kendrick’s, “Amityville” inspired quickie touches on the notion of faith, and what role, if any, that ultimately plays in altering ones fate. At the very least, it illustrates the fact that it isn’t really important if what you believe is true or not, just that you believe it to be. Julia Swain’s camera work is simple but effective. Built on slick framing and moody lighting, the gentle transitions work wonderfully. My favourite shot is a low angle under the bedroom door looking at the shadowy outline of Billy’s feet. I enjoyed the brief suspenseful score and its appropriate spacing amidst the striking sounds of an axe impacting human flesh. The two key performances required high tension levels and both the experienced, Courtney Gains and young, Coulter, carry it well. Stellan is not afraid to showcase some fairly graphic practical blood and gore effects. The red on white backdrop during the action sequence caught me off guard (in the best possible way), and makes for some intense visual stimuli.

I only had one minor complaint and that was with a piece of the dramatic score that plays under the main theme, it felt like it clashed tonally speaking.

Stellan Kendrick’s latest short film, Goodnight, Gracie makes for a great introduction to a new and young filmmaker, albeit just a 4 minute glimpse. The cinematography is smart, the casting impressive and most of the score fits nicely. The gory action sequence is well worth your time and it will be interesting to see where Kendrick ultimately goes with this premise. Goodnight, Gracie is currently showing on the film festival circuit, so keep an eye out for this one soon and check out the teaser below!