This is a review of Russ Meyer’s, 1965 Exploitation cult classic, “Faster, Pussycat! Kill! Kill! Faster, Pussycat Kill Kill tells the story of Varla (Tura Satana), Rosie (Haji) and Billie (played by Lori Williams), a trio of wild go-go dancers who raise hell across the Mojave Desert after they kill a man and take his girlfriend Linda (Sue Bernard) hostage. Thus setting in motion a chain of events that involve the girls trying to con a crippled old man and his two sons out of their money. The film also stars Ray Barlow,  Stuart Lancaster, Dennis Busch and Paul Trinka. 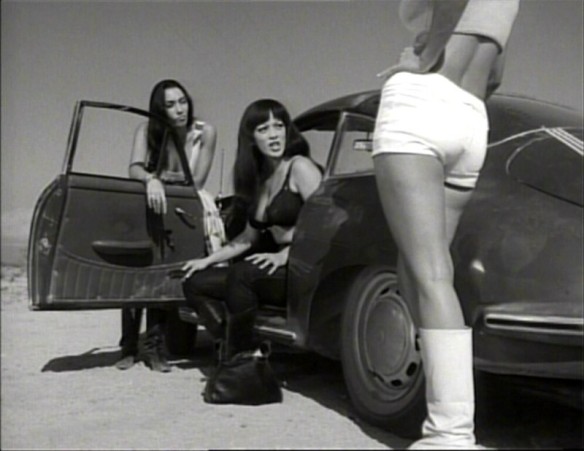 The late Russ Meyer, who’s now seen as somewhat of a cult figure, at least due in part to some of his body of work, was notorious for making a handful of films in the 60’s that were seen as smutty. During that era, and well into the 70’s, the slightest mention of anything resembling pornography would deem one guilty of objectification. The early part of Meyer’s career saw him working in Comedy, with unknown films like “Eve And The Handyman” and “Heavenly Bodies”. Later in the piece he returned to comedy, as well as meddling in some Drama. It wasn’t until 65′ and his double exploitation release with “Motorpsycho!” and “Faster, Pussycat! Kill! Kill!” (made on just a mere budget of $45,000 it would go on to become his most successful film), that he would mark his footprint in the world of B movies. By his own admission, Russ had a fetish for large-breasted women (I can relate haha), hence why they feature so prominently throughout his entire body of work. The man made no apologies for doing obscene things especially if they were intended to be in bad taste. I went into Faster, Pussycat Kill Kill having only seen one of Meyer’s previous films in, Motorpsycho! a couple of months prior. Other than the title, I didn’t care much for it. It certainly didn’t help that the transfer I watched was of an extremely poor quality, and although I like the Exploitation genre I’m particular about the content and standard of acting delivered in these type of affairs.

So first off, you’ve got to acknowledge that great title. Whether you like the film or not, “Faster, Pussycat! Kill! Kill!” is a great name. Don’t quote me on it, but this just might be one of the first films to feature all women in the four key roles (it was the 60’s after all). Let’s not pretend that mainstream Hollywood didn’t take issue with the equal representation that Meyer’s was attempting to bring about at the time, not to mention these particular femme-fatale’s were the antagonists of the piece, something rarely seen. The male characters in his films are almost always expendable. This distorted sense of sleaziness in film throughout the 60’s and 70’s would eventually pave the way for the likes of  Tobe Hooper, and more recently Quentin Tarantino, Gaspar Noe and Rob Zombie. Whether it be an individual scene like the infamous dinner table sequence from Hooper’s groundbreaking, “The Texas Chainsaw Massacre” or entire chunks of muscle car stunt work, as seen in Tarantino’s, “Death Proof”. All were inspired by the works of Meyer either directly or indirectly.  More recently, independent films like “Bitch Slap” and a little known Aussie film called “El Monstro Del Mar (that sees three dangerous vixens run amok in a seaside coastal town), have taken quite a similar approach to their presentations. 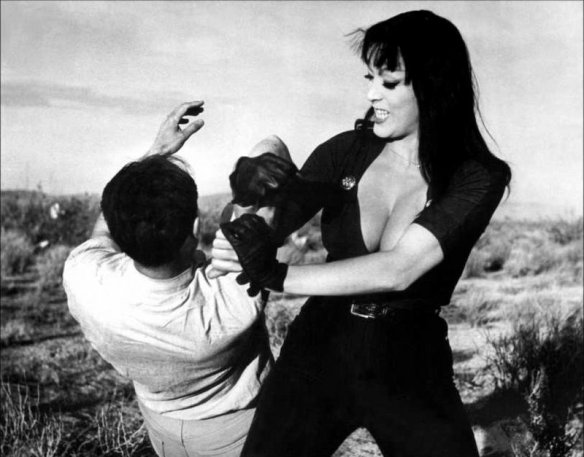 I thoroughly dug the black and white photography and there’s a cool narration at the start of the film, followed by a disclaimer promising violence to the viewers. The audio track was surprisingly clear given almost the entire film takes place outside, that and it’s the original recording from the 65′ print. The music department did a great job of the score, utilizing plenty of double bass and drum particularly in the early part of the film. Later, there’s some really cool saxophone. All three women, Haji, a regular in Russ’s films, Lori Williams and Tura Satana were each in wonderful shape and had no qualms about eluding to their assets. Their faces do tend to be on the harsh side though, whether that be due to poor lighting or just too much makeup, either way they look hardened (even for the time). Both the fight choreography and the car stunts are commendable, though the length of the drag scene could have been shortened without losing anything. While the shots of the girls in their cars are clearly depicted via the shaking of a gimbal of sorts, the wider shots are actually of cars racing (which is better than what you get nowadays in independent film making).

From a technical point of view and considering the film’s budget, most of the film making aspects are well conceived. There’s some pretty lame trash talking throughout, and plenty of puns, usually coming from Varla because she’s the one calling the shots. There’s a chunk of stale dialogue once things progress to the house setting portion of the film and that tends to drag the pacing down. It’s a sluggish film overall given it only runs for 83 minutes. The men chanting “go-go” at the girls during the opening shots of the film was cringeworthy, so to the laughing by the girls. I liked some of the score but the brass section through the middle act gets quite abrasive after a while as it continues to build in the mix. There’s also a bunch of music that sounds better suited to something like “Gulliver’s Travels” than it does the Action/Exploitation caper, not sure what they were thinking. Continuity wise there’s a couple of obvious blunders, most notably after Varla is done smacking Linda’s face in with her fist and there’s no visible blood in the aftermath. I understand that censorship was stricter than ever during that time period, but that’s something that should accompany that action, and here it doesn’t. Secondly, the positioning of Linda’s boyfriend in relation to where he gets approached from doesn’t make any sense, he’d see the response coming.

None of the performances are anything to write home about, but hey, you don’t watch Faster, Pussycat Kill Kill for the acting, it is what it is. I do, however, want to touch on Sue Bernard’s acting because it was quite a ways off from the get go. Her over the top screaming is a lot to handle and the school girl delivery just comes across as poor staging. As far as I see it there are two glaring issues with Faster Pussycat Kill Kill, one is that the characters just simply aren’t likeable, and two, Meyer’s ultimately fails to deliver on his promise of mayhem and sex. Okay, if I’m straight shooting, there’s a brief sex scene between two characters but they’re fully clothed and it’s over before it begins. Sex isn’t everything, but it is a cornerstone of the exploitation genre so at the very least I expected some nudity but the absence of that further hurts the film. Satana does wash off at one point but it’s carefully framed so as to not show anything graphic (disappointingly so). On the violence front, there honestly isn’t much. There’s a couple of deaths but they’re quite tame to say the least. The attitudes of these girls will be sure to leave you scratching your head and asking why? Why any of it? They’re dancers, and probably well paid ones, yet for some reason they feel the need to treat everyone like dirt because they feel the world owes them something. It would perhaps be different if they were strong resilient women fighting back for the right reasons (exhibit A, Death Proof), but we never witness anything bad being done to these girls, there’s no arc, no resemblance of growth, and still, we’re supposed to get on board with them and their arbitrary antics.

Faster, Pussycat! Kill! Kill! is one of the first of its kind, a mixture of Exploitation/Action and Crime, all set against the backdrop of the Californian desert. I’ve been meaning to check it out for years, but it wasn’t until I recently heard rumors of a remake that I thought I best get moving. I love the title, the black and white presentation and the fact that Meyer’s defied the stereotypes. One can’t deny that he and the likes of John Waters paved the way for those working in the genre today. The audio levels are good on the DVD transfer and a sizeable amount of the score fits the intended tone of the film. The women are sporting sexy outfits and great figures and the choreography and stunt work are both pretty decent. The downside is that there’s some pretty poorly written dialogue, music that often sounds out-of-place and patchy acting from a number of the cast members. The pacing is surprisingly sluggish and there’s some lapses in continuity on occasion. The biggest issue is that the film just doesn’t deliver to the standard it  promises. The mayhem is virtually non-existent, the intended sleaze gets lost in translation and the three girls aren’t even remotely likeable, nor is the supposed protagonist, Linda. All of this equates to a pretty poor product and not something I can really recommend unless you’re a die-hard fan of old school exploitation. Here’s hoping for that remake… any day now Quentin.