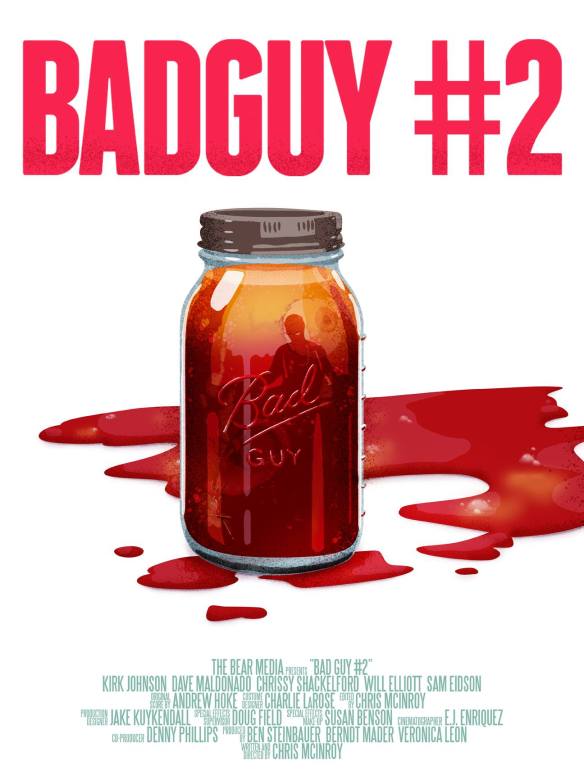 I’d like to start by saying thanks to Writer and Director Chris McInroy, for allowing me access to an online screener of his 10 minute, Horror/Comedy short “Bad Guy #2”. I originally stumbled upon a short synopsis on DreadCentral.com, and it sounded like a fun concept and really entertaining little short. Bad Guy #2 is about a new young up and comer (Kirk C. Johnson), whose working for a local crime ring . He finds himself quickly climbing up the ladder, as each one of his co-workers inevitably fail to complete their specific task. He confides with his girlfriend Donna, and together they’ll try to figure out the fastest and most resourceful way to get ahead in the business. The film also stars Sam Eidson, David Maldonado and Chrissy Shackelford.

Bad Guy #2 knows exactly what it is, and what it is, is basically equal parts Horror and Comedy. Right from the outset, you know some of what you’re going to see will probably be quite horrific (and it is, but in the best way possible haha). Chris and Co aren’t taking themselves too seriously here. The comedic approach is so plainly self-aware and done in good-nature, that you can’t help but have fun with it. Obviously it helps if you understand the intent, and or are a fan of this new wave genre that manages to blend polar opposites quite successfully. The gags strike early, and for the most part are quite amusing. The bad guy style of banter is aimed at those particular stereotypes, while mocking the use of extra’s and or secondary characters in films and TV. I don’t know the budget for this one but I’ll assume it’s a DIY (do it yourself) indie, If that’s the case color me impressed. Majority of the camera work is well controlled, with simple but smart shot choices and the audio is crystal clear. 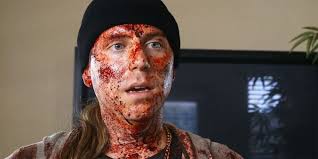 All the performances are on point, but ultimately the likability and clever comedic timing is down to Kirk Johnson. He reminds me of another Actor named Mark Webber. I think Kirk performs with similar idiosyncrasies when it comes to his awkwardness and mannerisms when in somewhat serious situations (haha). It appears as though he’s having a lot of fun in this, and overall just being a real trooper when it comes to smothering himself in quite an abundance of the red stuff! Speaking of red, Bad Guy #2 has some of the most impressive practical effects being done in the genre (Savini would be proud). The consistency of the blood is the standout, not to mention two nasty and brilliantly executed deaths. The honors go to Doug Field for his special effects, as well as Susan Benson/Mischa Fruge for their impressive makeup and effects work.

I don’t have to many criticisms for something with only a ten minute running time, but it could have done without some of the profanity. The line delivery was funny enough without the forced F’s. I noticed one spot during the “acid” scene (for lack of a better word), where the camera got a little shaky but it was really only for a few moments. The Kingpin had a few entertaining lines early in the piece, but some of his dialogue got unnecessarily crass during his interactions with the crew. The stuff about teddy bears and buttholes was like an awkward one man conversation that seemed to be missing Seth McFarlane.

Bad Guy #2 is a very entertaining and original Horror/Comedy short. Our anti-hero (haha), is a loveable goof played to a T by Johnson. The technical aspects are well conceived and a majority of the humor hits the mark. Though, It’s really the glorious practical effects and kill sequences that elevate this one. I’d say if you are a fan of films like “Tucker and Dale vs Evil” or “100 Bloody Acres” *see my review*, you’d have a lot of fun with this. Keep an eye out for its official release date!