WE SUMMONED A DEMON

Firstly, I’d just like to start off by saying thank you to Writer/Director, Chris McInroy (Bad Guy #2 and Death Metal) for allowing me early access to an online screener of his 5-minute Horror/Comedy short “We Summoned A Demon”. We Summoned A Demon sees two buddies (played by Kirk Johnson and Carlos Larotta) attempting to do just that. One is in desperate need of help with the gift of the gab so he can ask out his lady friend (hence the summoning), but the ritual doesn’t quite go according to plan and thus hell ensues. The film also stars John Orr as The Demon. I openly acknowledge that McInroy is one of a handful of individuals that inspired me to get involved in filmmaking and I thoroughly enjoyed his two previous short films. Chris has been making movies going on 15 years now but recently found a particular niche in the awkward world of horror/comedy. Those who love the hybrid of genres are bound to get a gleeful kick out of both “Bad Guy #2”, a hilarious story about the pros and cons of promotion in the bad guy business *see review* https://adamthemoviegod.com/bad-guy-2-review/ and “Death Metal”, a day in the life of a struggling metalhead busker *see review* https://adamthemoviegod.com/death-metal-review/ and We Summoned A Demon is no exception. 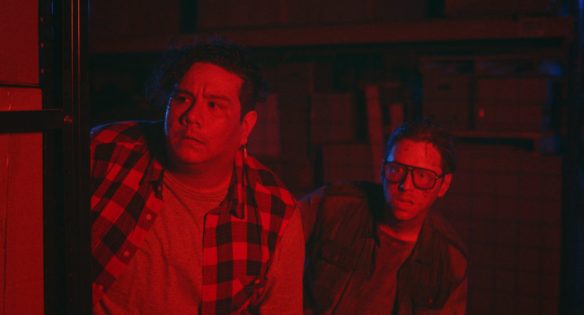 The good here, is that McInroy is sticking with his one wood because he knows it’s likely to get him to the green (to be fair I actually have no idea what a one wood does in golf but you get the analogy… or maybe you don’t, who knows? ha). His partnership with talented comedic actor Kirk Johnson sees the pair reaping the rewards of the festival circuit, as well as the respect of those among the independent film crowd, and with good reason. DP, E.J Enriquez (who worked on the criminally underrated film Red White and Blue) presents us with really neat framing and a lot of simple but direct shot choices. This is the first time I’ve seen Chris opt for a more vibrant color palette in regard to the lighting, and for the most part, it works. Andrew Hoke previously composed the quirky score for the aforementioned Bad Guy #2 and it was fantastic. With We Summoned A Demon he changes it up, opting for that full-blown 80’s retro synth instead, that when coupled with Enriquez’s aesthetics, really lifts the film. Hell, this one even has its own theme song! The physical comedy beats ring true yet again, and both Johnson and Larotta get their moment to shine. The “It got on my shirt line” was hilarious and the “Travolta” gag had me chuckling as well. McInroy consistently gets the self-aware element of his narratives right and that’s no easy feat. Those craving the red stuff will be pleased to hear that we get an abundance of it within the first thirty seconds, as well as a violent action scene toward the climax. In addition, the costume design and look of the demon are surprisingly cool, although a touch cheesy in nature. 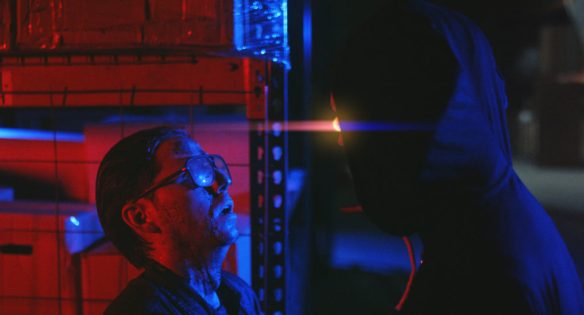 As has come to be the case with McInroy’s work, my complaints run thin. I’m not sure how I feel about the film closing on a farfetched “bro down” vibe, although it is a short about a demon.. so there’s that (haha). Unfortunately, the impact of what might have been a potentially memorable on-screen death is otherwise diminished due to the visual red on red clash. Whilst the lighting structure is eye-catching, the gorehounds won’t quite get to bask in the same gory glory that they might have with Chris’s two prior shorts which were just softly lit.

We Summoned A Demon firmly places Chris McInroy three for three in the world of Horror/Comedy shorts. He’s undeniably one of the best going around right now, sticking to what he knows, using the right people in the right roles, and driving high production value with his work. We Summoned A Demon has nice cinematography, stylish lighting, and an old-school synth-heavy score. The comedic timing continues to land, there’s ample blood flow, and the demon looks pretty rad too. It’s plain as day to see that Kirk Johnson does what he does with absolute ease, and I’ll continue watching everything and anything where he teams up with McInroy. I may have warmed a bit more to a slightly different resolution and I’d love to have seen the action conceived a little more like those sequences in the previously mentioned Bad Guy #2. Small gripes aside, We Summoned A Demon is sure to have great success on the festival circuit and it will rightfully go down as one of the best shorts of the year. You can check out the teaser trailer below. Bring on the next one guys!