This is a review for the Region 4 (DVD) of “Drifter”, Co-Written and Directed by Chris von Hoffmann. Drifter centers on outlaw brothers, Miles and Dominic Pierce (played by Co-writer and Actor, Aria Emory and Drew Harwood respectively). Miles is wounded and requiring medical assistance, so the two temporarily seek asylum in a barren town they find inhabited by a family of psychotic cannibals. The film also stars Monique Rosario, James McCabe, Anthony Ficco, Rebecca Fraiser and Joseph Atash. I’ve been eagerly awaiting Hoffmann’s film for the better part of twelve months, and naturally, with that, comes a certain amount of expectation. Chris has made short films for over a decade but Drifter is his debut feature-length film. Let’s get into it!

After watching a few of the video updates on the progress of Drifter, I got some further insight into Chris’s passion for film making and the creative process in general. I really dig the poster art (which can be seen above) as well as the basic premise and setting for the film, clearly inspired by a number of other genre films. The desolate and post apocalyptic landscape is obviously a component we’ve seen before in countless films from years gone by. The “Mad Max” franchise being the most well-known, but there’s other films such as “The Road” and “The Rover” among others *see review* https://adamthemoviegod.com/the-rover-review/. Drifter’s execution is made even more complicated by the fact that it contains a number of night sequences, which can be difficult to shoot at the best of times. When you combine this location and the budget, the logistics behind getting an independent film of this nature made, are far greater than one would think, and for that alone, I commend Chris. The framing looks great, as do some of the early aerial shots shown during the Pierce’s journey via car. Hoffmann employs gentle zooming and great tracking shots in all the right places, not to mention, plenty of effective wide shots too. The audio is very clear given the amount of external shots in the film (probably with the help of some ADR, additional dialogue recording) and the foley is nice and sharp. Hoffmann also utilizes plenty of sound effects that almost play as cues to accompany Chris Visser’s edit. Upon first hearing the score, I figured I was pretty much in for a Mad Max rehash, tonally speaking. It wasn’t until the end of the first act that I began noticing composer, Nao Sato  had composed a unique mix of music. Yes, some of it does sound quite like Mad Max, particularly the driving bass and drum sounds. Though it’s the inclusion of some 80’s style synth, in the same sort of vein as films like “Scanners” and “They Live” and to a lesser extent “Dawn Of The Dead”, that actually give Drifter that fresh boost.

Drifter has a quick running time of just 80 minutes and there’s plenty that happens in that short space of time. I believe most of the cast had previously worked on one or more of Hoffmann’s short films and everyone does a really solid job here. Some viewers may get hung up on the fact that Emory and Harwood don’t look much like brothers but their performances should help to tip the scale in the right direction. Harwood plays Dominic, the older of the two. He spends most of his time trying to teach Miles to defend himself and explaining to him how the world has changed, it’s anarchy and every man for themselves and that he needs those crucial survival skills up his sleeve. Emory’s character gets battered and bruised throughout the course of the film and he does a great job of showcasing that dwindling resolve, so kudos. Rosario plays, Vijah, a local woman who comes to the aid of the wounded Miles during his hour of need. She turns in quite an emotionally driven performance and does it well. Latos and Sasha (played by Ficco and Fraiser) are certainly the two craziest and most colorful characters in the film. Latos is the right hand man of the town’s self-proclaimed leader, Doyle (James McCabe) and Sasha is Latos’s girl. I think Ficco and McCabe turn in the two most memorable performances. Latos is a highly strung freak, lanky in stature with a hyena like personality, and he loves to taunt the prey. McCabe’s, Doyle is a little more level-headed and just wants the group to be one happy (but insane) family, only in his own mind of course. If he’s not swinging a bat, he’s cracking pills and displaying idiosyncrasies reminiscent of Gary Oldman’s, Stansfield from “Leon: The Professional”. The attention to detail in the makeup is probably one of the highlights of the film. Each character looks dusty and grimy like though they’ve been through the ringer, and who knows for how long. The blood and gore effects are all practical and look good, especially the brief blood spray on the camera lens during the first key altercation in the film, that was a nice touch.

The only technical gripe I had was with the volume of the score in the mix. It’s a little loud and that’s usually to be expected if the aim is to generate a certain level of suspense, but here, that wasn’t the case. On a similar note, even though I enjoyed most of the sound cues, by the second half or more accurately the last act, those foreseeable spikes do become a little played out. Most of Chris and Aria’s dialogue is quite good and feels natural enough but there’s some excessive profanity in a few places that just comes off feeling forced. A personal preference issue I had was in regard to the films color grading. The skyline and digital enhancements look continuous throughout most of the film, but every now and again you catch a glimpse of some inconsistencies between the way it looks in close ups, versus how it looks in a wide shot (me being extra picky of course). It’s easy to say with hindsight but I would’ve liked to have seen the characters of Latos and Doyle switched around. Not the actors, just the characters. Because even though both of the performances were great, I felt like Andrew’s character and depiction was the more menacing of the two and if Latos was at the top of the family tree, I think the climax might have worked better and been more impactful. 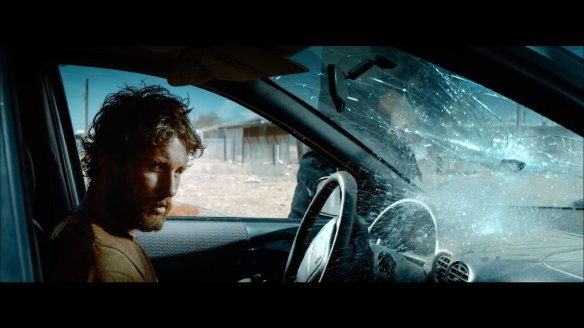 I was surprised to find that the script was fairly straight forward and there weren’t many credibility based problems. Most of what occurred could have feasibly taken place inside the confines of the story parameters. There is one sequence that sees Dominic use a handgun to shoot a man from quite a distance. Now I’m no gun enthusiast but knowing some people who’ve served in the police force, I’ve heard how difficult and ineffective small firearms can be at a distance. So I find it hard to believe that he could make that shot perfectly, but of course there’s always the possibility that Dominic was ex-military in the old world (for lack of a better word), so who really knows? Another issue, almost immediately after the Pierce’s arrive in the seemingly abandoned town, they’re warned by Vijah to stay inside and out of sight. Yet within minutes, Dominic decides to go off all half cocked about town looking for trouble. He’s able to do so on the first occasion without consequence, but later he’s warned again by Latos not to mess with Sasha (Fraiser) and once again he ignores advice. I’m not sure how you go about writing that in a more believable way but I’ve always been of the “Don’t make matters any worse” approach. I would’ve liked to have seen the Pierce’s plight setup in a slightly different way.

If it hasn’t already, Drifter is going to draw comparisons to Tobe Hooper’s infamous 1974 film, “The Texas Chainsaw Massacre” and perhaps not in agood way. Ordinarily I’d just say what horror movie of this nature hasn’t drawn those same comparisons? It’s also par for the course when you write a movie specifically about a cannibalistic family because TCM is the first one that fans recall. The problem here is that at least two sequences (one in particular) in Hoffmann’s film are completely lifted from Hooper’s iconic film. Personally it doesn’t bother me all that much because I’m far more in a way a fan of the modern TCM franchise than I ever was the original (other than acknowledging what it did for the genre at the time). There’s a scene here where the brothers are driving down a highway and come across a bloodied and disheveled girl. She doesn’t so much hitch a ride with them, so there’s that covered, but what she does do is utter the same (or very similar) words as actress, Lauren German did in the 2003 TCM remake. A single like for like scene definitely won’t be the kicker for most viewers, but I do think that fans of Hooper’s original film might draw the line at using a dinner table scene as the climax of your film, something Hoffmann and Drifter are guilty of. As I said, it didn’t really bother me because I wasn’t a big fan of the aforementioned. For one, the acting at this dinner party is ten times better than that of the one in The Texas Chainsaw Massacre. With that said, it’s essentially plagiarism so I’ve got no choice but to mention it here.

I had quite the long wait eagerly anticipating Chris von Hoffmann’s, “Drifter” and I couldn’t help but have preconceived notions about the film. Hoffmann and Emory have written a pretty tight, exploitative style script that still manages to pay homage to films like “Mad Max” and “The Road”, among others. I love the poster art, the familiar premise and the location itself. I can’t fault the cinematography, which in turn drives the high production value. The audio levels are smooth, the foley sharp and Sato’s score is unbelievably energetic in the best way. The cast all turn in solid performances, the best coming from Anthony Ficco and James McCabe. The makeup detail is first-rate and the practical blood spray looks good as well. There’s a few little technical inconsistencies and imperfections but that’s not uncommon in independent film making. Now, having seen the film I think I would have preferred to see Ficco’s, Latos playing the “big bad” instead of Doyle, simply because he just projected that little bit more. There’s a couple of liberties taken with specifics in the script and those scenes that are more or less copied from TCM, are bound to get under certain viewers skin. I think Miles character arc is rather predictable and I could have used a little more bloodshed and on-screen violence too. In any case, Drifter is still an entertaining and well made independent Horror/Thriller made by a talented group of people. If you like these kinds of films be sure to check out the trailer below and support Chris and purchase a copy of the film, it’s available online, through media platforms and in stores.