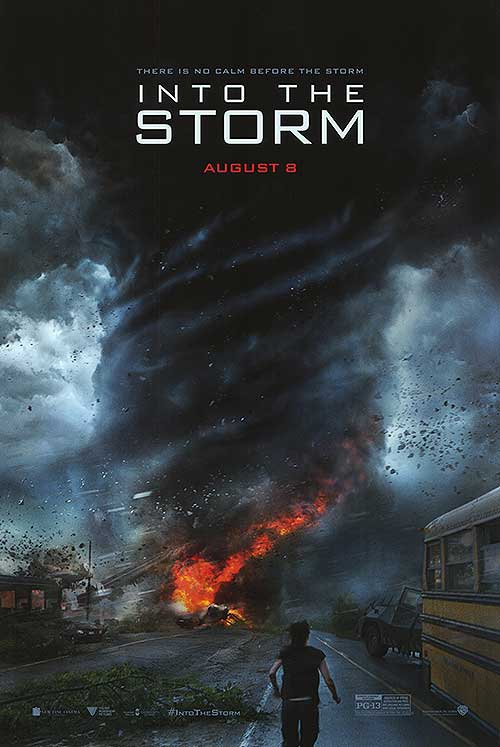 This is a new review for Steven Quale’s (director of Final Destination 5) new blockbuster disaster film “Into The Storm”. I was a big fan of FD5 so it’s nice to Steven back behind the camera again. I like that this film didn’t draw on big Hollywood A-listers or a well established director, the end result makes this all the more impressive. Into The Storm is a film told from several different points of view. Pete (played by Matt Ross from Todd Phillips’s various films) plays a tornado/twister hunter and his life’s work has consisted of trying to get footage from within the eye of a storm in the hopes of learning more about the phenomenon. He travels around in his custom “Titus” which is a vehicle equip to handle the conditions. He has a documentary crew on board which is made up of Daryl (Arlen Escarpeta), Jacob (Jeremy Sumpter) and Lucas (Lee Whittaker). Allison (played by Walking Dead’s Sarah Callies), is the groups research analyst responsible for tracking the storms.

The second point of view in the film comes from 17-year-old high school student Donnie (played by a somewhat newcomer Max Deacon), who is supposed to be recording a video time capsule for his future self in 25 years. Donnie has the biggest crush on a girl at school named Kaitlyn (the lovely Alycia Carey), he sees an opportunity to help her with a school project which leaves Donnie’s younger brother Trey (Nathan Kress) to film the high school graduation, a job given to Donnie by the vice principal who happens to be Donnie’s father Gary (Richard Armitage). Shortly into the graduation a storm hits, leaving Gary and Trey stranded at the school while Donnie is trapped at an abandoned factory. The documentary team and Gary’s and Trey are about to cross paths when they get caught in a series of tornado’s trying to rescue Donnie before the town of Silverton is flattened.

The various uses and style of the camera work in this film separates it from a lot of other disaster flicks. It would have been really easy to copy something like Cloverfield or model the look of the film on something else we have already seen before. Thus, by the use of several different camera’s following the action from multiple points of view we get a slightly different and original take on things. The audio and booming sound effects were fantastic. You’re going to get the most bang for your buck if you see this one in theatres, the only thing that could have enhanced this even more would have been a 3D transfer. Majority of the cast don’t have a lot of experience but they still managed to do a pretty good job of convincing us that they are as scared as they appear to be. The chemistry was pretty good between Gary and his two sons (which is kind of the drama aspect). The standout for me though was Max Deacon, he has that every nerdy kind of teenage boy look about him but he brings the goods when it matters most. I thought he was definitely the strongest in the more emotionally heavy scenes, he was that good that it dragged everybody else down somewhat.

I heard the film was loosely based on a couple of Twister Hunters in the U.S that were killed about a year ago trying to get up close and personal to one. You really get the feel of how devastating one of these would be if you were caught up in it, but at the same time I’d imagine it to be quiet mesmerizing. Digitally the film is flawless. The CGI blend in all the action sequences is very smooth. I like that it continues to knock you on your ass! Every time the action hits you, you get just enough time to catch your breath before the group is caught back up in another intense tornado and that’s how a disaster film should be. The cool gadgets, including the “Titus” vehicle also make for some truly entertaining climactic scenes.

Like I said the acting for the most part is pretty consistent but a few members of the cast had a weak moment or two. The character of Jacob projected nothing, no fear, no desperation, no anything. I’m sure it was probably written that way but in that case he probably didn’t need to be there other than to make up the numbers. Richard Armitage felt a little Bruce Campbell-ish (B grade), in his emotions during some of the rescue attempts and Nathan Kress didn’t seem all that worried about the dire straits either. Obviously you can’t take the premise of the movie with 100 percent accuracy otherwise majority of the cast would have been decapitated by shrapnel moving at 300mph or whatever… (haha). But it would have been nice to see a bit more effort in the attention to detail with cell phones and camera equipment. They could have at least covered their camera’s with plastic to avoid them getting saturated during the storm, because well.. they wouldn’t work. Kaitlyn seems surprised when her cell doesn’t work after water has been rising up to her neck and the phone has been getting wet for most of the movie (ah hello?? duh!). I like the stuff with Donk and his redneck buddy and it’s probably not that far from the truth to be honest (haha). I think they were mostly there for some comedic relief though. A few times it got a bit too silly and just before the closing credit’s was a pretty big stretch and It’s a highly unlikely outcome for the pair. 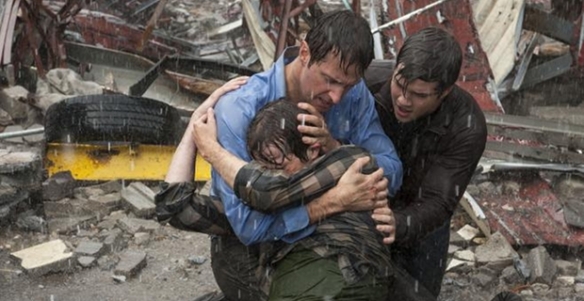 As far as pure entertaining disaster movies go their hasn’t been one as good as Into The Storm since Roland Emmerich’s “2012”. It’s not cliché in the character development or the relationship aspect, it’s got great pacing and it’s a lot of fun. We have a talented Non-A list group of actors that have a natural chemistry. There are some really cool toys and most importantly the digital effects and epic tornadoes put something like Twister to shame. Your unlikely to see anything this good again for a while, so if you enjoy films like 2012 and The Day After Tomorrow be sure to catch this one in a theatre soon!!