ATTACK OF THE LEDERHOSEN ZOMBIES

This is a review for the UK release of “Attack Of The Lederhosen Zombies”, a new Horror/Comedy from Austrian Writer/Director, Dominik Hartl. Attack Of The Lederhosen Zombies follows a trio of young snowboarders who head out to the alps to showcase their skills in the hopes of securing a sponsorship deal. Hot headed, showboat extraordinaire, Steve (played by Laurie Calvert) takes it one step too far and ends up costing himself a contract, much to the displeasure of girlfriend and make-do manager, Branka (the lovely, Gabriela Marcinkova). The couple, along with mutual friend, Josh (Oscar Dyekjaer Giese) end up stuck at a remote ski resort where they must battle locals who are slowly turning into zombies following some not so legal experimentation by land owner, Franz (played by Karl Fischer). The film also stars Margarete Tiesel, Kari Rakkola, Martin Loos and Patricia Aulitzky. Going back a few years Hartl shot a brief concept trailer consisting of some cool practical effects, snowboarding stunts and an interesting choice of weapon. He used said trailer to garner funding in order to make a full length feature, that feature is Attack Of The Lederhosen Zombies.

So zombies hey? When are they going to die? I don’t mean that literally of course. We all know they die, we’re continuing to see it with each and every new (but no so new) entry into this played out sub-genre. I’m of course speaking of the subject matter itself. Zombies have now officially been covered in everything from graphic novels, video games, to film and TV and anything else you might be able to think of, and it shows no signs of letting up anytime soon. Other than acknowledging what he did for the Horror genre, I was never a fan of any of George A. Romero’s original films, such as “Night Of The Living Dead”, “Dawn Of The Dead”, “Day Of The Dead”… and all the other deads (you get my point). The Walking Dead has never really been for me either. The idea of spending endless hours following a group of survivors through a zombie apocalypse never appealed to me. What does appeal to me is the entertainment value these films can hold, especially if they’re done the right way. That usually means a quick running time (no more than 90 minutes), graphic deaths that utilize practical effects and lastly, plenty of bloody mayhem! That should segue me nicely into Dominik Hartl’s latest, fast paced zombie caper.

I’m a big fan of a lot of the Horror content that’s been coming out of Europe over the last decade. It seems as though these crazy Austrians don’t have to answer to the same ratings/classifications boards as the majority of the rest of the world (particularly in the US). Their style of horror can be more or less described as “splatter” and it’s something the genre is in desperate need of. Ever since Tommy Wirkola’s, “Dead Snow” franchise, I’ve been keen to check out any and all gory fun coming to us from their side of the globe. I love the setting of Hartl’s film, the glorious snow-covered alps (although I believe it was actually shot in Italy) lends itself to the underlining snowboarding theme. The production value is much higher than one would expect from an independent zombie flick (though the budget is around $3 million USD). Everything is nicely framed and there’s some really diverse shot choices in here. As you’d expect, a movie with snowboarding protagonists is at some point going to look to showcase that talent. In the opening ten minutes of the film there’s some pretty skillful stunt work that fans of the sport will marvel at. From there, the night exteriors through the moonlit forest look particularly arresting, and as soon as the action picks up we get some great aerial shots over toilet stalls, as well as a neat, vertical tracking shot from the bar floor through to the attic where the group of survivors are holed up. 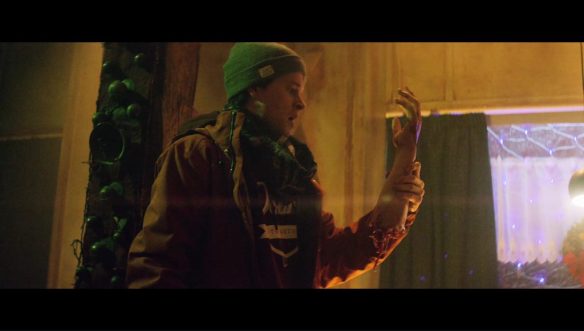 A fair portion of the film takes place during the day, making lighting things that bit easier, particularly in the opening act. Though even when day turns to-night, things are quite effectively lit. The central location in the middle act of the film is the ski resort’s local bar, run by Rita (played by Tiesel). The scenes inside the bar are vibrantly lit with reds and greens and they look great. Paul Gallister’s music choices are interesting too. There’s some 80’s influenced synth that works and I admire the fact that Dominik didn’t opt for any serious somber tones. Attack Of The Lederhosen Zombies knows it’s a self-aware effort and doesn’t ever shy away from that. Even having one of its characters ask another if he’d ever even seen a zombie film before. Hartl’s characters are mostly likable but the introduction of a relationship between Steve and Branka is somewhat of a head scratcher if you consider their differing personalities right from the start. The standard of acting is pretty solid for what is mostly an inexperienced cast. Now the thing that usually makes or breaks a Horror/Comedy is if at least one of the two pieces to the puzzle fit. Some of the one liners are okay but most of the comedy appears to have been lost in translation (if there ever was any laughs to start with). Where the film makes up for it is with nicely detailed makeup effects and a respectable amount of blood and gore. Let’s be honest people, Attack Of The Lederhosen Zombies automatically get points for using a snowboard as a weapon, among others. On top of that, there’s an inventive kill using ski poles and a wooden bench gag that results in a gory face split. There’s a heap of other entertaining deaths bound to please fans of films like the aforementioned “Dead Snow”.

My only complaint from a technical standpoint is some of the patchy digital compositing of the surroundings during a couple of the early snowboarding sequences. The aerial shots look good but when there’s close ups, the backdrop looks spotty. In the beginning of the film, a passer-by on a snow mobile comes across an infected fox (or deer), and although the puppet looks impressive, it doesn’t fit the timeline of events. As far as the viewers concerned, there’s no signs of any outbreak until Franz tests his product for a potential investor, so I’m not sure how the animal could’ve been infected first. Maybe these experiments have gone on prior and for quite some time, though I’m not sure because it’s never actually established. My other issue is that when things with the trial go south (for lack of a better word), neither Franz or his partner take action in regard to the one character whose clearly infected. Making matters worse, we’re led to believe that nobody else on the mountain realizes there’s anything wrong with the guy… even though he looks like death warmed up.

Hartl’s dialogue more than often comes across as aimed at your typical American audience. Much like the new kid at school, it’s trying a little too hard. I understand the need to open the film up to a wider audience, and even though it is presented in English, it’s a European film and you can hear that inflection in most of the characters interactions. My guess is that most fans would opt for wanting to see natural conversations and not be steered into the “bro” speak we know all to well. Attack Of The Lederhosen Zombies only runs for 78 minutes, most of which Dominik spent wisely. If there’s one scene that needed to be cut it’s a random an illogical dance number between Steve and Branka at the most inopportune time. In all seriousness, Is anyone going to be looking to bust a move midst the chaos of a zombie outbreak? Answer, no. I get that it was probably played for laughs but even in that context it just doesn’t work in this one. The common drawback for me concerning these kinds of films is that there’s never enough on-screen carnage to satisfy me. The blood and gore is mostly what I’m about when I seek out the zombie sub-genre and there’s just not quite enough here (even Shaun Of The Dead fails on that front). What disappointed me more with this one was that Dominik alluded to a bunch of other weapons (including a chainsaw) that unfortunately never got used.

Zombie related content has taken itself far to serious for long enough (except for the previously mentioned, Dead Snow films), coincidentally a couple of the best ones out there. Hartl’s, Attack Of The Lederhosen Zombies has exactly what you hope for with a film like this, pure nonsensical entertainment. The production value is surprisingly high and it definitely shows with the well conceived technical aspects. There’s sharp cinematography with the inclusion of some really ambitious shots, befitting lighting and a decent soundtrack. The performances are consistent and the characters were mostly likeable. The highlight here is clearly the makeup, the blood and gore effects and those deaths, via exaggerated snowboard action sequences. I had a couple of minor gripes with digital effects and some other issues that lie with the specifics in the translation of the writing. The only thing really separating this one from its European splatter counterparts is that like always, I was left wanting more splat. I really hope Hartl gets to revisit the world of snowboarding because there’s plenty more to explore that could make for an even gnarlier sequel. You can purchase the film now through Ebay, Amazon and other various media platforms.

My rating for “Attack Of The Lederhosen Zombies” is 6.5/10