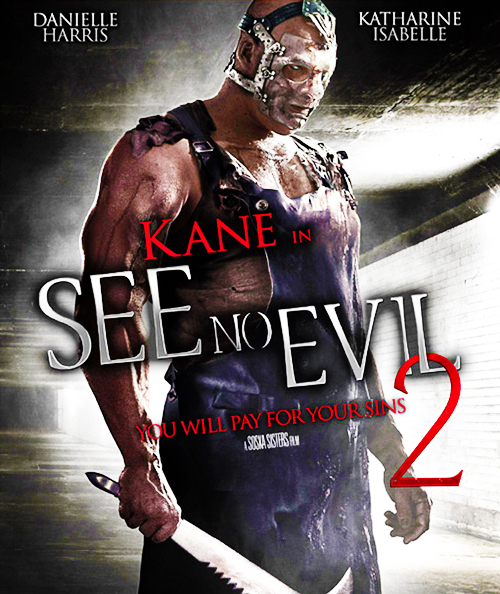 Jen and Sylvia Soska are twin sisters and Canadian filmmakers who came onto the scene back in 2009 with a cool micro-budget grindhouse flick called “Dead Hooker In A Trunk”. After success with the film on the festival circuit three years later the girls managed to acquire enough funds and a distribution deal to shoot “American Mary” a very unique film about body modification. The film starred their close friend Katharine Isabelle. This year the girls are behind “See No Evil 2” starring Kane (WWE wrestling) or Glenn Jacobs for those people who know him. See No Evil 2 picks up pretty much where the first film left off. Jacob Goodnight and his multiple victims bodies are being transported to the local morgue. Amy (played by scream queen Danielle Harris) works at the morgue but is supposed to be having the night off to celebrate her birthday with friends. Instead she decides to hang around and help out her friend Seth (Kaj-Erik Eriksen) with the corpses. A group of Amy’s friends end up surprising her at work with an impromptu party while Jacob lay lifeless on the table… or does he??

The film also stars the lovely Katharine Isabelle (American Mary) as Tamara, Greyston Holt (Tv’s “Bitten”) as Will, Michael Eklund (The Call) and the gorgeous Chelan Simmons (Tucker and Dale Vs Evil). Firstly just let me say that this wasn’t written by The Soska Sisters they were just chosen to direct the film. WWE studios don’t have the best reputation for releasing quality films but I did enjoy “No One Lives” released last year so they can’t be all bad. I wasn’t a huge fan of the original See No Evil and I was hoping to get something more out of this follow-up, But did I??

I already mentioned the Soska sisters small body of work in of itself is impressive given such the short period of time they have been involved in the business for. I was pretty keen when I saw that they were going to be directing this film. coupled with the fact that I’ve been a fan of most of this cast for a while now. I thought the introduction and opening credits were really cool especially mixed with the industrial sounding score in the beginning. The camera work is well executed considering the movie is shot entirely in one location. It can be difficult to hold the viewers interest when you spend most of the running time looking down corridors and around corners but the sweeping camera work down the passages work well. The morgue itself is a great location for the film it had that Halloween 2 (Rob Zombie’s), vibe about it. The cast has pretty natural chemistry and most of the performances hold up. The editing is nice and smooth and keeps things moving along. The most suspenseful scene of the film was the opening action sequence which doesn’t occur until about a third of the way in, the rest of the film fails to generate any real tension. The one scene involves the power going out and one quirky Katharine Isabelle with a box of matches to get your heart racing a little bit.

If there is one I thing I’ve learnt (that I kind of already knew) from watching See No Evil 2 it’s that studio backing and a decent budget don’t always end in success. I found the audio throughout most of the film was to quiet but  that wasn’t so bad because most of the banter and chit-chat dialogue was pretty hoaky and didn’t give much in the way of character development anyway. The concept itself isn’t overly original and when you know that you look for other aspects that might elevate the film from countless others within the genre. The acting at times is a mixed bag. Even though the character of Tamara was by far the most interesting, Katharine may have played it a little too out there (could have been written that way though). Most of the other characters have little to nothing going for them. Danielle is lovely and Amy has somewhat of a character ark and It was nice to see Eklund in the mix but other than attaching some names with a few credits to the project, I couldn’t see the point.

There are many issues (some of which can be forgiven) with the actual story and how things unfold. We are led to believe that Jacob is dead but all of a sudden when he rises there is a convenient and clunky explanation as to how he could have faked his own death…. hmm (not sure how that happened??). Most of these issues come down to the writing and not the directing. Someone forgot to write a security officer or someone of that nature into the script. Government buildings these days have security don’t they? It could have been two-fold with that inclusion because one, it gives a realistic approach to the scenario and two it’s an extra body for the count. The biggest issue of all with See No Evil 2 is the complete lack of blood and gore. With the exception of one decent action sequence/kill the entire 90 minutes lacks imagination and the level of brutality most slasher fans have come to expect just isn’t there. I don’t find Glenn Jacobs (despite his height and build) to be all that menacing and I don’t think the character is interesting enough to really root for the demise of the group and that’s problematic in this genre.

In my opinion See No Evil 2 was a swing and a miss and I should have known that going in because If you don’t enjoy the first film, it’s rare you like the second. However, I was hoping with the Soska sisters at the helm that this was going to deliver something gory and fun. I will continue to support the girls as filmmakers because whether you like their films or not you have to admire the way they go about it. Dead Hooker In A Trunk was made for under $3,000 and in less than 4 or 5 years they went from that into making American Mary and See No Evil 2 with a hundred times the budget. This pair worked as hard, if not harder than anyone else in the genre to get where they are and everyone who has ever done the same can and should respect that and the attempt.