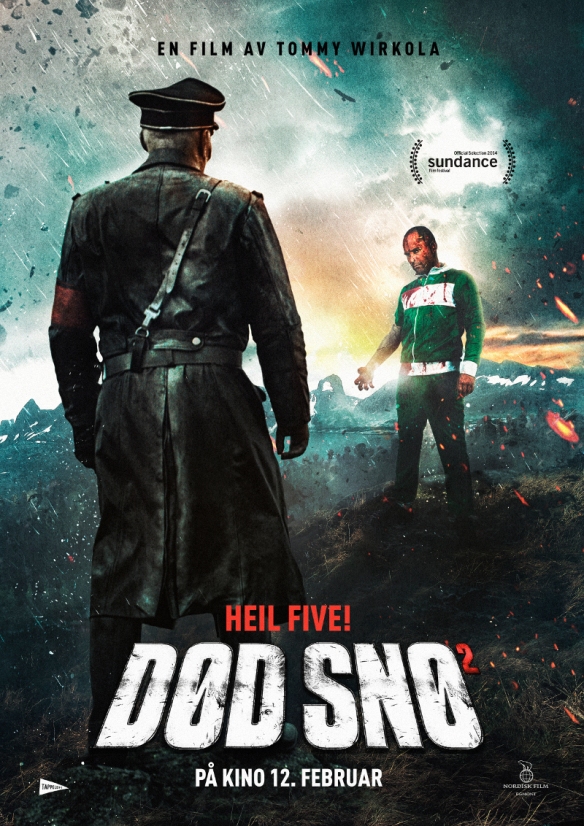 Hey everyone, it’s been a while but I’m back with a new review. Speaking of a while, its been 5 years since Tommy Wirkola (director of “Hansel and Gretel Witch Hunters”) came onto the scene with his Norwegian gorefest  “Dead Snow”. I only saw the original film recently and it will definitely go down as a cult classic in my eyes. It was a great blend of european comedy and splattered zombies in the familiar cabin setting. So you can imagine my excitement for the much-anticipated sequel “Dead Snow 2: Red Vs Dead”. Those of you that have seen the original film will be glad to know that our hero Martin (played by Vegar Hoel) and the general zombie master Herzog (Orjan Gamst) return to do battle with one another. The film also stars actors from the US, (Martin Starr from “Knocked Up”) as Daniel, the leader of the zombie squad. Along with Jocelyn DeBoer and Ingrid Haas.Those of you who haven’t seen the first film, please stop reading my review and go and pick yourself up a copy, it’s well worth it! 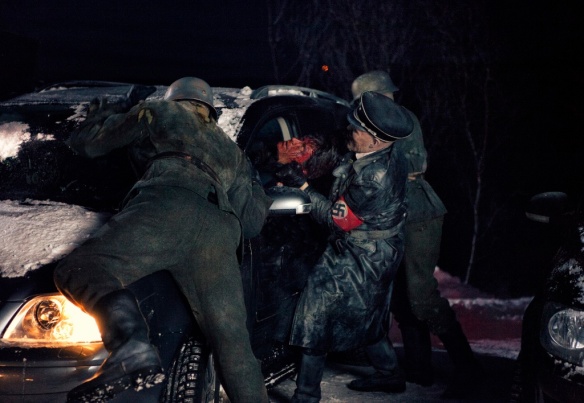 To make sure I don’t spoil the events of the first film I will just start by saying the sequel picks up exactly where the first film left off but this time the setting is much more suburban. The blend from the 2009 film into the sequel was really smooth and I enjoyed watching a few of the flashbacks from the first film. Martin is trying to escape the mountains and countryside and head to some kind of safety when he ends up crashing his car (in a slightly lame way if you ask me). From there, he discovers that the authorities think he’s responsible for the deaths of his friends and girlfriend so he chooses to head to a nearby town hoping to find out what the Nazi-zombies are up to. What he finds is a brand new army of undead that need to fulfill their final mission, capturing the small town of Talvik.

The development of the story and background information surrounding the Nazi zombies and what they did when they were alive was featured much more heavily in this follow-up film. I know a lot of horror/gorehound fans probably don’t care about the plot details, but even something as ludicrous as this script needs to have some form of a story. Very much like the first film the production values are great. The audio levels and camera work are both very sharp. I read this had a budget of $30 million dollars as opposed to the first film which barely had a million dollars. I’m not sure if that is correct but if so that proves how much of a success the first film was. The crew was clearly able to do a lot more with this one though. 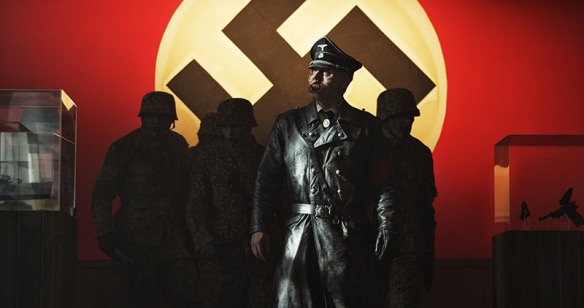 The attention to detail in some of the practical effects and the zombie makeup was impressive. Sure, majority of the kills are enhanced with digital effects and certain things that would have taken a lot more time to do practically and some probably couldn’t have been done. None the less it all looks pretty good. I love this new age blend of dark/dry comedy crossed with the blood and gore. We can all thank Peter Jackson, he is the reason these types of films are getting made. The suspenseful score works well when Herzog is showing how truly menacing that horrific face of his is but then he will do something like his Hitler salute and it will contain some random comedy, I dig that kind of stuff! There are plenty of moments of comedic relief in this one, so don’t worry. I think they hit the mark a little bit better with that aspect this time around. The acting is also pretty solid. It’s great to see Vegar back again, I’ve really grown to love the Martin character. When he’s not killing Nazi’s he’s a little awkward when it comes to knowing what to say, which just makes the humor that much more fun 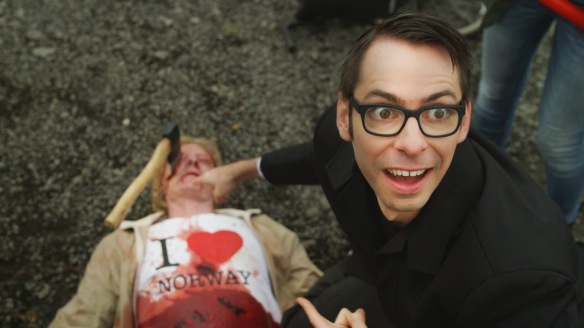 The anti is upped in the sequel with plenty of cool additions to the script. There are three Americans that make up the “Zombie Squad”, I didn’t see the story going in that direction so that was really cool. A few pop culture references to current zombie related rules etc. Characters have powers that we never knew about as well as the addition of a couple of cool arms making for some really great humour as well as a couple of unique deaths. It’s these cool little quirks and the attention to detail in some of the kills that makes this movie 100 minutes of pure entertainment.

I can’t say anything much is wrong with Dead Snow 2. As long as you know what you are in for (which most people do) I think you should have a lot of fun and don’t take it seriously… like at all…. I mean like at all (haha). The only thing I can say that could have used some work would be the body count (the amount we see that is) and the quality of the splatter effects (if you have seen it you are probably thinking what Adam? as if…) But seriously I was really hoping this would go ridiculously overboard with splatter and gore effects, decapitation etc a little more like the second half of the first film.

With a story like this you can take as much liberty as you want with the amount of carnage you choose to set up and show. Maybe my hopes were built up a little to high for this one but I feel like they almost didn’t do enough. I think the first film takes a lot longer to get to the action but when it does it hits home a lot harder than this one, so that’s a little dissapointing.That and a very odd, darkly comedic (maybe?? I don’t really get it) ending that I don’t think adds anything to the mix, everything else works just fine though.

Dead Snow 2: Red Vs Dead achieves exactly what it set out to do and that’s to entertain gorehounds for 100 minutes and I think for the most part it does that. It has the small town vibe of Edgar Wright’s film “Hot Fuzz” the odd humour of “Idle Hands” and the splatter of Peter Jackson’s “Braindead”. Maybe I’m just being too fussy but I wanted to see non stop carnage that never lets up and puts everything else to shame and I didn’t quiet get that. However, your unlikely to see anything come out in the next year or two that you can have as much fun with as this.