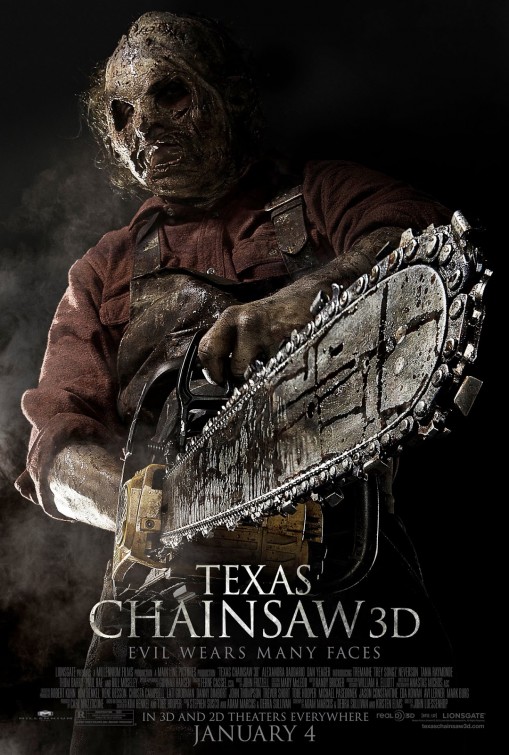 John Luessenhop, director of the film “Takers” was given the opportunity to reboot the Texas Chainsaw Massacre franchise. The film is a genuine follow-up and sequel to the 1974 original. It stars Alexandra Daddario as “Heather Miller” our main character and connection to the original Sawyer family. The film also stars Trey Songz, Scott Eastwood, Tania Raymonde and Shaun Sipos. We get a little nod to the original film by the return of Bill Moseley as “Drayton Sawyer” and Gunnar Hansen (originally leatherface in the 74 film) as “Boss Sawyer” another relative. These two appear in the opening 7 or 8 minutes of the film, that was a nice touch.

The story is about Heather (Daddario), who finds out that she is adopted and receives a letter informing her of her grandmothers passing. The letter tells her she has inherited a house in Texas and needs to come and discuss the matter. Along with her boyfriend Ryan (Songz), her best friend “Nikki” (Raymonde) and their other friend “Kenny” they set off across the country. Shortly after leaving they decide to help out a hitchhiker named “Darryl” (Sipos), who is needing to go towards Texas. This is another little nod to the hitchhiking scenes in both the original and 2003 remake. It’s not long after Heather arrives and the carnage starts, Leatherface is living in the basement of the house. He has lost his entire family and doesn’t know who these people are that are invading his house. 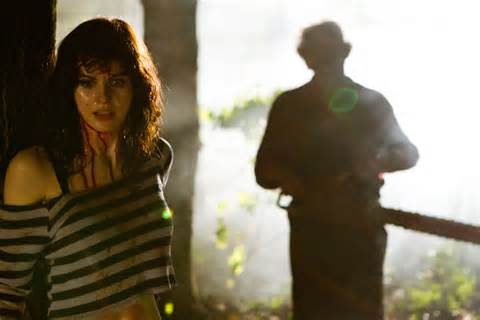 First off, I like the various nods that pay homage to the original 1974 film and even the 03 remake. It’s a very well shot film, good steady cam work. We also get some ceiling cameras and some lingering shots of empty hallways and rooms, that helped build the suspense. Some really cool homage shots like Nikki’s buttocks as she is walking up to the house, (straight out of the original film). As well as the inclusion of the slaughterhouse scene in the final act, that was great to see as well. I also really enjoyed the score and we all know the signature trait for the TCM franchise is the very creepy theme that’s been used in nearly all the films. I was glad to see they used it again here. I thought the girls looked stunning and they seemed to have genuine chemistry. As far as the acting goes I don’t think anyone had to test themselves all that much. I think the standout was Daddario, her character has the most emotional ups and downs and you can feel for her because she is innocent. I thought it was a little weak that she wasn’t more shocked with the fact that Leatherface existed, after all that’s a scary notion. 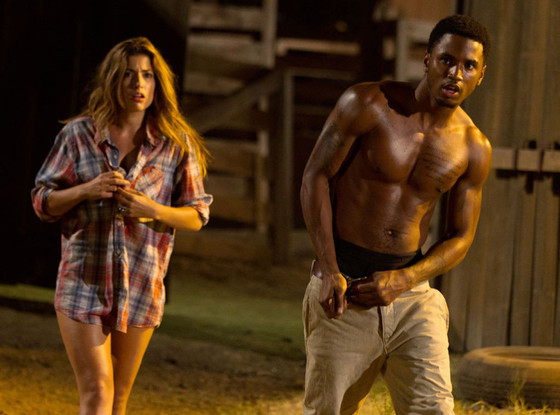 The kill scenes overall were pretty impressive too. I thought the opening bludgeoning scene was a bit lack lustre, all the build up for not much of a result. Once again though it was paying homage to the first kill scene in the original. Thankfully, as the movie rolls on we get some fantastic kills involving the chainsaw. One scene in the basement and the other in the slaughterhouse were the two that stood out as particularly impressive.

However it’s difficult to ignore the glaringly obvious issues with the film’s timeline. It’s been said many times before in other reviews and for hardcore fans of the original, it can be noticed immediately. If your new to the franchise it’s probably not going to bother you. This could never be a perfect film and loses merit based on this aspect. Heather, who is a baby in 1974 should probably be around 39 or 40 in present day 2013 right? That’s pretty much the consensus. The fact that Heather is only supposed to be 21 or 22 in this, isn’t credible at all and its stretching the boundaries of imagination. The one thing Luessenhop didn’t do (maybe a saving grace) was put 1974 and or 2013 into the actual frame. People are still smart enough to work that out though, with our technology it looks very modern-day. I think the two options were to cast a 35-40 year old in the role of Heather and risk losing your target audience. Secondly, the better option would be to have set the film around 2000. It’s a genuine sequel and could have been believable that way. People are giving really scathing reviews because of this mistake.

I’m not too sure about the details with Leatherface’s real name being “Jed”. I know Jed was the name of the little boy in the 2003 film, but I’m not sure how that fits into this. I don’t ever remember Sheriff Hoyt (sheriff from the 03 film) or anyone else calling him that. The details on Jed and his Grandmother escaping the fire at the beginning was very vague too. The addition of a scene depicting that would have made more sense, rather than things just being presumed. Some of the details surrounding the events and background information can get a little bit hazy. Leatherface definitely had a different look and feel about him. I didn’t necessarily dislike that, it was just very different to what I was expecting. The suspense that was created in the 2003 film (one of my favourites) just didn’t shine through in this one though. However, I really liked the last act and the cool little twist. This isn’t the type of franchise that normally has a twist so I thought that was original.

The way people were talking about this over the last few months I was expecting the absolute worst. I was impressed with the twist, to think all of it could have been avoided with one easy decision was unique. Its got some good blood and gore it’s really fast paced and it’s just fun. Yes I know the film has timeline issues galore and therefore it could never been a top-notch horror film or sequel. These types of films always follow the same formality e.g the unimportant one-dimensional group of friends that are just there to be killed off. I know this, I have come to expect it. I was happy enough with what I saw and I’m looking forward to getting the 3D version!

My rating for “Texas Chainsaw Massacre 3D” is 6/10