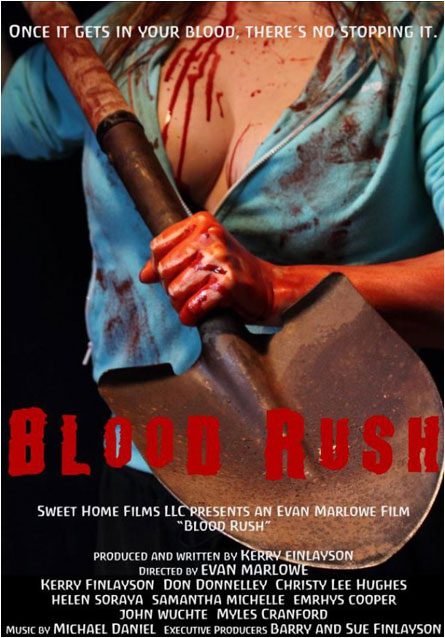 First of all I want to say thankyou to the director of “Blood Rush”, Evan Marlowe. I appreciate you sending me a screener of the film before its official release date. Blood Rush is a story about a small town that is overcome with the lust for blood. The towns people think the local witch doctor is to blame but they don’t know that he has a different agenda. The film stars Kerry Finlayson, Don Donnelley, Christy Lee Hughes and Helen Soraya. The film is set in LA and follows a group of girlfriends and one of their partners. They escape from a “zombie” outbreak in the city. It’s not exactly zombies but I suppose it’s the closest thing to label them as.

It’s a pretty conventional setup for an outbreak type of horror flick. There isn’t anything new here to separate this from the hundreds of other films of the genre. I really dig the poster artwork and the opening credits of the film. They reminded me of some films I like from the 80’s like Maniac Cop etc. I thought for the most part the audio was pretty loud and clear. The score fit nicely in places too, it’s probably a little overused though and therefore starts to get on your nerves after a while. Some of the zooming camera work is quiet effective and overall the prosthetics are commendable. However, I read somewhere that the film had around a $50,000 dollar budget. If so, I’m not quiet sure where the money went. Don’t judge me though, I’m a huge fan of low-budget films and some of my favourites have been made for less than $20,000. They managed to accomplish a lot more than Blood Rush ever did.

The opening scene throws us right into the middle of the start of the attack, or at least I think?? We never get an official explanation of the outbreak. Anyway, the camera is far to zoomed and close to the actors faces, it’s also being held at a strange angle. The opening 10 minutes is quiet shaky too. Those who know me know that camera and audio work are my two picky thing when it comes to low-budget films. The colors in this film seem really washed out, even during the daylight scenes, I’m not sure what happened. A lot of choppy editing and incredibly wooden acting (not in the good way), make it difficult to relate to any of the characters. The church scene dialogue had a lot of echo as well as the fact our characters are given some truly cheesy and poorly written lines.

I thought when it came to the story and the action sequences the film might have improved. Sadly the characters never evolve or develop. We only know a few minor details about our main group. The action sequences contain really lack lustre choreography and are missing sound effects. At one stage, I think someone gets hit with a shovel and there isn’t even a sound effect to accompany it, what was with that? I find it hard to believe that any of the money for this went to blood and gore or practical effects. I was really disappointed with the cringe worthy CGI blood that was used in several scenes. It reminded me of a film called “The Summer Of Massacre” which was a painful viewing experience. Considering the crew on Blood Rush did a solid job of the prosthetics I don’t know why they didn’t set up some practical gags. They clearly had the funds to be able to do it and just chose not too.

I tried really hard to get into Blood Rush. I gave it well over an hour but I couldn’t keep watching it. Zombie/outbreak films are difficult enough to do on a low-budget, but if you don’t get the core elements right and give the people what they want, there isn’t much room for movement. I appreciate Evan letting me view the film. I am a firm believer that there is always improvement in each attempt. I look forward to hopefully getting the chance to see what Evan does next. I think there is a lot to be learnt from “Blood Rush”, sadly it’s not something I would be recommending anytime soon. Saying that, if you like low-budget films you may find something in this that I didn’t.