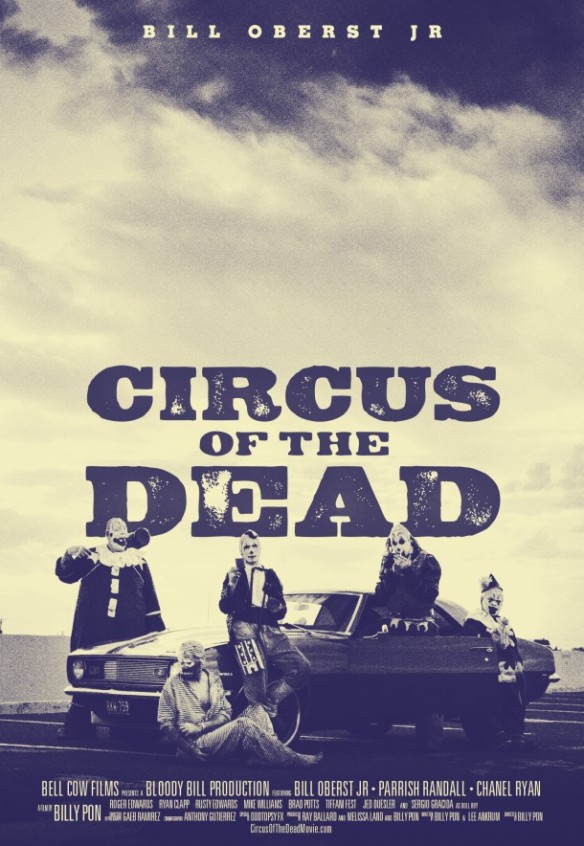 CIRCUS OF THE DEAD

Firstly, I just want to quickly thank both producer, Melissa Land, and Director Billy Pon, for giving me access to the private screener of their film “Circus Of The Dead”. I’ve been following the steady progress of COTD for as long as I can remember, and I can now say it’s coming very soon, so keep your eyes peeled. Circus Of The Dead centers on a deadly morality game that ensues, between so-called family man Donald Johnson (played by Parrish Randall), and a gang of Sadistic clowns, led by Papa Corn (Bill Oberst Jr), who are in town performing at an old run down circus. The film also stars the lovely Chanel Ryan, along with Ryan Clapp, Rusty Edwards, Mike Williams and Kyle Mueller. The clown has long since been thought of as fun, children’s entertainment, but I’m really not sure why?? (haha). Their makeup is disconcerting, they can turn balloons into just about anything and they often mime entire routines. I don’t care what anyone says about them, their scary at the best of times. Which brings me to Pon’s, first full length feature Circus Of The Dead. Billy first made a Horror short, several years back called “Doll Boy”. I thought the raw idea behind the film was good, but the technical aspects, such as camera work and lighting let it down. Let’s see how Billy and Circus Of The Dead fair this time around. 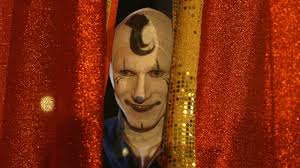 I’ll begin with the production value of Circus Of The Dead, which I think was estimated at $150,000. Other than a few minor issues with audio here and there, everything looks and sounds great. The opening shots to the film are so slick and polished, we get a look inside a trailer as someone prepares for a show. The combination of a 1920’s style bluegrass song, and a montage of great shots, help get you in the mood from the outset. The whole southern style soundtrack really works. Bill seems to have a better understanding of appropriate distances, when framing actors faces, not to mention the camera work throughout the whole film looks great. It’s a lot of subtle things, like shooting through a convenience store fridge, or panning over the top of an awesome looking Camaro. I spent the first act of the movie trying to work out where I knew Parrish from. When finally it dawned on me, it was the low-budget zombie film “The Quick and The Undead”. I didn’t like the film much, but I thought he was one of the better actors in it. His role in this is a very demanding one, and for the most part he does it well. Playing Don, a man who could potentially lose his entire family, if he doesn’t do as the clowns ask him. It involves a lot of struggling and screaming and doing things he never thought possible. A couple of his lines felt a bit to scripted and some reactions to certain revelations seemed rather forced. His character should warrant a lot of sympathy for what he endures, but unfortunately we don’t know enough about him to really get on board, so we just feel how we think we are supposed to feel. 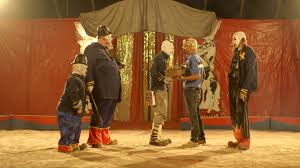 I need to start a new paragraph as I talk about Bill Oberst Jr. What can you say about Bill? I’ve had a few discussions online with him, and he seems like a great down to earth guy. Those of us who have been following his work for years now, know that he is one of the hardest working guys in the independent film industry. He has countless projects in production, and or being released soon and continues to get involved with everything and anything. His work ethic reminds me of another Bill, that of the Moseley (haha). I’ve seen Oberst in plenty of films now, and he is fast becoming the go to man for anything horror related. After “Nude Nuns With Big Guns” and “Abraham Lincoln vs Zombie”, I quickly became a fan. I thought he had outdone himself with a performance he gave in one of my favorite slashers “Ditch Day Massacre”, which hasn’t officially been released yet. Make no mistake though, this is Bill’s show right from the get go. He steps up the intensity once again, in his role of Papa Corn, ringleader of the clowns. He brings such enthusiasm and intensity to an already incredibly disturbing character. The makeup, the overalls and the crazy Ralph E Wolf and Sam The Sheepdog style hair, (with that little patch flopping around on his head haha), just sell the fact that this is all him. The other lunatics are, Noodledome (Ryan Clapp), the giant, wooden mallet wielding cannibal of the group. Mister Blister (Rusty Edwards), who seems like the assertive/ prone to pedophilia type, and lastly Jumbo (Mike Williams), who’s the deadly dwarf clown. Each of them have their own personalities, but regrettably they aren’t explored, and that addition might have added to the chemistry of the group. 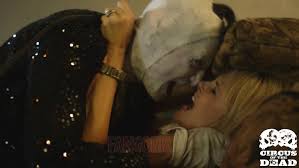 Now, How brutal is Circus Of The Dead??, I suppose it depends on what your comparisons are and how much you can take. Stephen King’s “IT”, has been sitting in my DVD rack, unwatched for about 10 years (haha). So the only comparison I have, is the Horror/Comedy, Clown film “Stitches”, which had some great gore but was all for comedic purposes, nothing more than shits and giggles. Nothing about Circus Of The Dead is giggly, except for maybe Noodledome (haha). Moving onto effects. Marcus Koch, who’s my favorite modern makeup and prosthetics artist, has worked on many of the B movie gems that I love. I don’t want to spoil any of the kills in COTD, but let’s just say you get an abundance of the red stuff. Once again though, this being as brutal as one would think, I still kind of expected more. It always impresses me when a filmmaker shows the attention to detail in aftermath shots, or shows as much as they can practically. I understand the film has to clear a rating, but I felt this could have been so much more brutal (think Ryan Nicholson’s “Gutterballs”. Although, the chainsaw in the last act was a nice touch, you have Marcus so please use him and never stop using him! (haha).

It’s actually very difficult to review a movie of this nature. It’s kind of like that freeway pile up that you know you shouldn’t look at, but you can’t bear to look away. I’ve read reviews for something like “The Devils Rejects”, where certain critics said it had no merit, and never would. I on the other hand, I’m not a violent person in the slightest, but I can find merit in just about anything. I get the feeling a lot of people wouldn’t have positive things to say about Circus Of The Dead. The script has some issues that mostly lie in the motive of certain characters. It appears this group of clowns operate on choosing victims that have “sinned” in some way, shape or form. That’s an aspect the audience can get behind, they can understand it. It may be a harsh punishment, but in the confines of the cinema world, it works, because people like to cheer for the deaths of truly shitty people (haha). The problem is that early on Papa Corn and his trio, abandon that apparent logic and start to kill more “innocent” people than guilty. Because everything is done with a particular malice, it makes it difficult for you to get behind innocent killing. 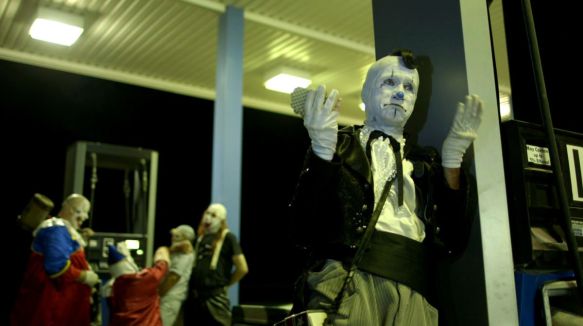 Some of the dialogue feels quite scripted, and there’s almost no focus on the psychological mind-bending of Corn’s approach to the victims. Oberst, makes some disturbing faces throughout the film, and I would have much preferred seeing a real game of cat and mouse between captor and captive, instead of some of the perverse deviant actions that we end up getting. Build the protagonist up, show the audience the mindset of both parties. How did Donald lose appreciation for the good things in his life? Show us his workplace, show us his friends and show us the daily grind, so we can feel like a part of his life. That way, when these horrific things start happening we really feel that struggle and not just sit back and watch it. I think the score would have benefited from a much more suspenseful theme during some of the stalking scenes. The continuation of those southern jams, makes it feel all to easy, but hey maybe that was the point. Other than a little bit of fun and stereotypical racial banter at the start, there was no comedy. For the most part, the black comedy also missed the mark. Unfortunately, anything that started out funny, wore out its welcome by dragging it out, and ends up feeling more disgusting than anything else. The fellatio in the trailer and the stage scene in the final act come to mind. 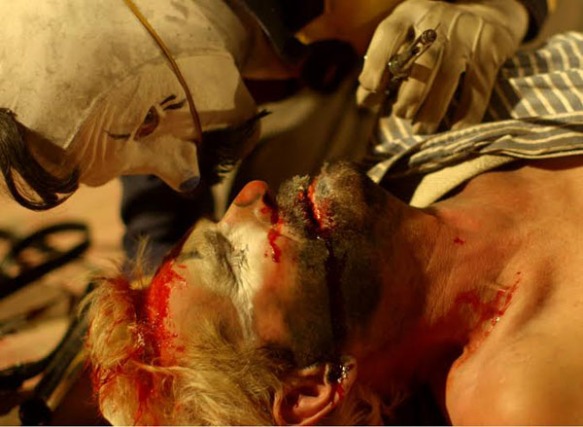 Furthermore, I didn’t realize that this was going to be more of a sexually violent film than action based violence. Don’t stress though viewers, because most of the sexually related content is only implied and not shown, it just surprised me was all. Unless I’m watching a film like “I Spit On Your Grave” or “Last House On The Left”, I don’t expect to see those sorts of things when I’m not prepared. A lot of that content could have been left out, because these clowns were already demented enough. Always an issue getting behind them when motives change, let alone the other kinds of acts that take place. Lastly, I just want to touch again, on my love for seeing more gags or elaborated death sequences. I felt several times the film was foreshadowing ways in which characters were going to die, that never ended up following through. Either they chose a different death all together, or what we wanted to see was only implied. You’ve got a chainsaw, big mallets, guns and knives, most horror fans want to see them used as much as possible. 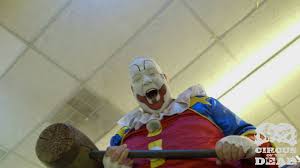 I’m not sure what to make of Circus Of The Dead, it leaves me with that uneasy feeling, similar to what I had when watching “Cheap Thrills”. Billy Pon joins Ryan Nicholson, in balls to the wall genre films that are bound to disturb, and I can respect that. This one is morally bankrupt, cruel and twisted just because it can be, so if you dig that, you’ll dig this. I found it so dark and disturbing, that whatever message it started out with ended up getting lost in translation. No denying this is a really polished looking film, with one stellar performance from Oberst. Unfortunately, many more than just the guilty are punished, and we could have done without the sexual violence. Instead, write a more diverse character arc for your protagonist, and focus the build up on suspense before you flip the switch. When the audience is hook, line and sinker, hit them with the most detailed deaths, and let your effects crew showcase what they can really do. I see merit here, but in my right mind I can’t say I was really entertained. I’m still stoked to hear Billy is going to be making a sequel, so I will keep my fingers crossed for that one. Stay tuned after the credits on Circus Of The Dead, because there’s a little cross over that your going to enjoy!!