“Pawn Shop Chronicles” is a new film from Wayne Kramer (Crossing Over, Running Scared). It’s almost three different films mixed into one. It has a wonderful ensemble cast. The likes of Paul Walker, Matt Dillon, Brendan Fraser, Vincent D’Onofrio, Norman Reedus, Elijah Wood and DJ Qualls. In their own right all these actors are great, so I was pretty excited to see this. Walker is the star of the first segment, playing a meth head named “Raw Dog”. Raw Dog and his brother Vernon (Lukas Haas) along with Randy (Kevin Rankin) are planning to rip off their drug dealer Stanley played by Norman Reedus. I was disappointed to see that Reedus was virtually non-existent in the story. He can give such great performances, to not utilise him wasn’t a good choice.

It’s a real diverse cast and I think that’s fantastic. The opening credits and comic book style editing were very reminiscent of another film in segments called “The Burning Palms” which I had really enjoyed. The opening segment is the strongest of the film. The comedy is brilliant. Paul Walker steals the show, his frantic itching of his face, his hillbilly southern accent and constant profanity is hilarious. He looks the part with his dirty skin and his cheap tattoos. The banter between Raw Dog and his brother Vernon was very funny. The character of Randy was really over the top but he still had his moments. The conversation about why rednecks or neo-nazis are supposed to hate Jewish people and the black community was so clever. It was very witty and really depicted the pointless nature of racism. I got a lot of laughs when they were discussing long noses and white supremacist groups haha.

Some of the zoom camera work reminded me of what Tarantino does in some of his films. The introduction to each segment was also really cool. Both the music and the tone of the script were hugely influenced by Tarantino. This whole film is structured very similar to Tarantino’s “Pulp Fiction”.

The second segment of the film is almost a horror film, the mood and intensity changes abruptly. Richard (Matt Dillon) stops off at the Pawn Shop, hoping to pawn a wedding ring so he and his wife can go on their honeymoon. Before he can do this he sees another ring that he claims belong to his ex-wife. She had disappeared 6 or 7 years ago and was never found. He sees this as an opportunity to investigate what happened to her. In a very unrealistic fashion, he leaves the woman he has just married in the middle of nowhere to follow the clues. There is no real closure on that situation and I didn’t find it very realistic. Questioning several less important characters, Richard eventually finds his way to a property belonging to Johnny Shaw (Elijah Wood). Richard finds out that Johnny Shaw has been capturing and imprisoning women for nearly a decade, this leads to a very violent resolution. The second half of this segment had some great gore orientated visuals. Matt Dillon was more than commendable in his role. I had no issues with it, I just think it didn’t fit this type of story.

When we finally get to the third and final segment, the film has lost most of its momentum. It’s unsure of what it wants to be. Ricky (Fraser) is an elvis impersonator who makes little to no money performing at small carnivals around the country. After a strange encounter with God? or The Devil? (not really sure what was going on) Ricky receives some talent (for lack of a better word). He starts performing to decent size crowds and eventually gets a permanent gig. The last segment didn’t really accomplish anything, it never had any real point. It was out of context with everything else. I think there was an attempt to make a connection when Ricky purchases a big gold medallion from the Pawn Shop, (Not sure why). I didn’t like Fraser’s character or his performance at all, I think it’s his weakest performance. To finish up the film with a loose connection to Johnny Shaw was also very sloppy. For one, I thought he had already died in the previous segment? Maybe I’m just getting the sequencing wrong but it seemed really unclear. 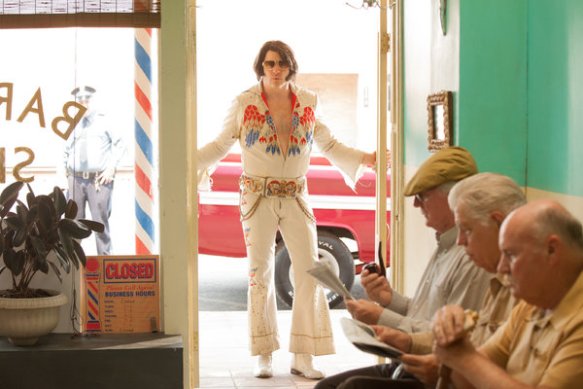 I still enjoyed this original concept however I don’t think it lived up to its full potential. The director does tie in the Pawn Shop with each of the segments and that’s a crucial element. I think the tone and mood of the segments changes to drastically for this to get a consistent resolution from each story. I think it’s the type of film you could just watch one segment. The first one is definitely the best. This is a darkly comedic tale that’s not for everybody. However, if you are looking for something a little bit different, it’s worth checking out.

My rating for “Pawn Shop Chronicles” is 6/10