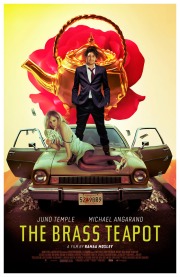 I had been told some good things about “The Brass Teapot” since its initial release. I have to admit it didn’t sound like something that would appeal to me, however I was definitely wrong about that. “The Brass Teapot” stars Juno Temple (Killer Joe, The Dark Knight Rises) and Michael Angarano (Almost Famous, Red State) l have to say these two have a very natural chemistry together that really comes through during the film. I can’t help but think these two are the twins of Renee Zellweger and Shia LaBeouf! It’s quiet freaky how often during the film, the mannerisms or idiosyncracies are comparable. I think they look very much the same too.

The story is about Alice (Temple) and John (Angarano) they are a couple having a hard time making ends meet. Stuck on the poor side of the little town they live in they are just trying to keep their heads above water. Alice is struggling to put her degree to any use and John is not performing at his telemarketing job. After John is fired and the two think their luck is running out they find a magical brass teapot. Yes you heard me correctly! The teapot pays out when it’s in the company of someone who hurts themselves.

The director Ramaa Mosley has written a very original and clever script with “The Brass Teapot”. The basic story questions your morals and values. What do you place importance on in your life? What are you willing to do to better your life? All these questions are asked throughout the film. The music in the first half of the film was one thing that really stood out to me as original too. A mix of acoustic and indie style songs were used. The film looks great too. From the landscapes of small town suburbia, to some of the shots in the woods. The comedy is very well placed because ultimately the film is a drama. It’s a difficult thing to do to get that balancing act right especially in a film of this obscure nature (obviously the plot being completely illogical) Some of the scenes were very well put together. The standout comedic scene for me would be either the bedroom scene or the family dinner scene. Alice and John have had a bit to drink and let’s just say there is some witty banter with the in-laws. The concept of a brass teapot paying out after someone hurt’s themselves emotionally or physically is very awkward but funny.

We get a bit of back story on the teapot’s origin and what it really represents. This is shown through various oddball characters attempting to steal the teapot. It’s almost reminiscent of the Golden Tickets in Willy Wonka. Sadly I think the last act of the film trips and stumbles to the line a bit. Our characters start to have a conscience about their decision-making and ultimately how far they are willing to go for happiness. We have some scenes with the guy who I think was supposed to be Alice’s ex (can’t remember his name) These were out of context and the trailer home scene reminded of Temple’s other film “Killer Joe” but didn’t fit in this. 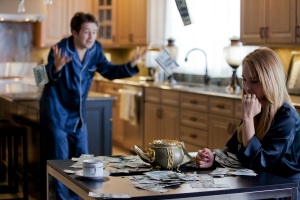 In the end I think what I like most about the film is that it says a lot about us as human beings. The things we think will make us happy. The element of greed, power, wealth and the respect we think goes along with all of that. It’s a film we can all relate too. Money does change people, it’s up to you how you choose to let it change you. Will it be for the better or the worse? How will you treat the people in your life? I like that there are lessons to be learnt from this film. On the other side of the coin it’s just a good, fun and honest film. It will probably go over a few people’s heads because of the fantasy element.. If you can’t look past the teapot paying money out to see what it really represents, this is not for you.

I haven’t seen an original idea as successful as this one since Harold Ramis’s “Bedazzled” this is the best combination of humor and drama that I have seen in a long time.