Firstly, I’d just like to say thank you Writer/Director, David Maire for allowing me access to an online screener of his 13-minute Horror/Thriller short “Chateau Sauvignon”. The film is a coming of age story for Nicolas (played by Michael Lorz), the adolescent son in a struggling viticulture family. Torn between the demands of his father (Sean Weil) and helping an ill mother (Pooya Mohseni), Nicolas sees an opportunity to please both parties in two very different ways when a devoted mother and her disinterested son arrive at the vineyard. The film also stars Anthony Del Negro and Nancy Nagrant.

Maire’s intent for Chateau Sauvignon is clear from the outset, and it’s to disturb. The film opens with some rather unsettling establishing shots of decaying matter, and transitions into a few nice close-ups and a handful of shots that emphasize the quality of the set design (or location if it wasn’t a conventional set). The audio track is nicely mixed and Robert Eletto (who scored The Hobbyist) approaches this with a less is more approach and it pays dividends. The performances are all solid and it was great to see Pooya (who worked on Terrifier) make an appearance in a couple of scenes. Anthony Pepe and his effects team did a commendable job of the makeup, applying a dark and tired look to Lorz’s Nicolas. The film has a couple of violent sequences and they showcase a healthy dose of pracitcal blood and gore too. 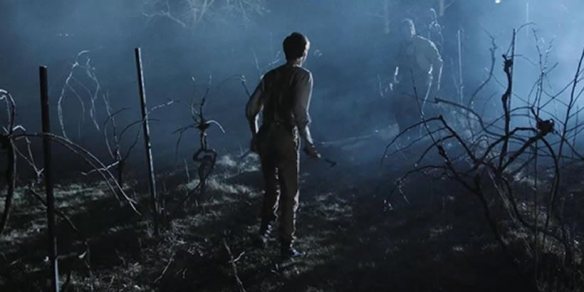 I didn’t enjoy all of DP, Oliver Anderson’s camera work. The film is guilty of some unstable handheld moments toward the beginning, as well as a sizeable chunk of dizzying movement during the final vineyard scene (seen in the image above). It was seemingly unnecessary to convey it that way because the victim couldn’t go anywhere, as is revealed in the shot that immediately follows where we see Patrick (the father) just standing there. Some of Anderson’s framing lacks assurance and the choice to use one obligatory 80’s zoom (you know the shot I’m talking about) seemed completely out of context. I noticed one continuity issue that results in a character making it all the way outside and into a vehicle before the other can really even turn around, it just simply wouldn’t have been possible without him noticing. I can’t say much about the ending without revealing spoilers, but I was left with a couple of questions regarding Eartha (Mohseni) and why the family was doing what they were.

David was kind enough to reach out to AdamTheMovieGod with what is just his second short film, Chateau Sauvignon. He builds this particular world quite well, doing so through plenty of attention to detail and some evocative color grading. The score is subtle, the performances are engaging, and there are a few genuinely violent moments for genre fans to rejoice in. Some of the framing isn’t as even as it could have been and the disorientating movements in the climax are seemingly pointless. There’s one obvious continuity issue from the cellar to the externals of the property, and most are likely to have questions surrounding the family and their actions. Notwithstanding its shortcomings, Chateau Sauvignon is another enjoyable and professionally made horror short and I look forward to seeing more from Maire and AireBedd Productions. You can check out the teaser trailer below!

My rating for “Chateau Sauvignon” is 7/10