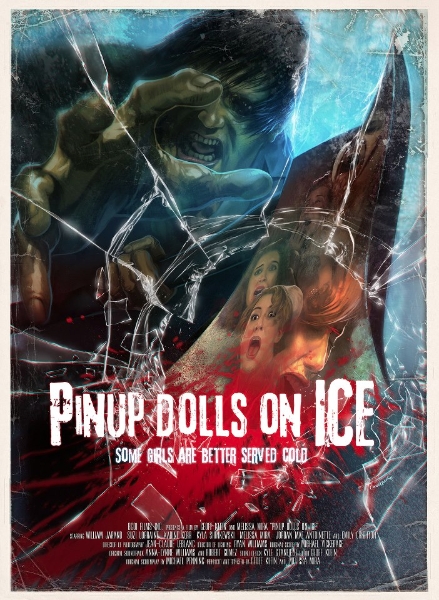 This is a review for the brand new Horror/Slasher film “Pinup Dolls On Ice”, Written by Michael Penning and Co-Directed by Geoff Klein and Melissa Mira. This latest endeavor is the sequel to Klein’s 2009 film “Bikini Girls On Ice”. Pinup Dolls On Ice sees a couple of  actors/actresses return in new roles but the cast are mostly made up of fresh faces and that’s a much-needed boost. The Pin Up girls are a 5 piece, hot retro striptease act who are invited by their friend Joy (Suzy Lorraine from “Bleeding Hearts” and “Bikini Girls On Ice”) to a secluded campground to perform at a long weekend show. The brutish and deranged Moe, who has an obsession with ice begins to stalk the girls one by one, Who will survive the night? Will anybody? The film also stars Karine Kerr, Kyla Shinkewski, Jordan May Antoinette, Emily Crighton, Ashley Laventure, Matt Popoff and William Jarand as “Moe”. Anyone whose been following my site since its inception knows that I like to try to say positive things, or give constructive criticism where I can. This is only Geoff’s second film and I’ll be honest I saw Bikini Girls On Ice back in 2010 and was completely let down, as were probably a lot of Horror fans who saw it. There’s a few do’s and dont’s, haves and have-nots when it comes to the Slasher sub-genre, in a nutshell Bikini Girls failed to deliver on all counts (except for maybe the bikinis… they were in their). When I heard this follow-up was being made I got my hopes up again because I feel like Geoff owed something better to his target audience then what he dished up the first time, so on with the review we go. 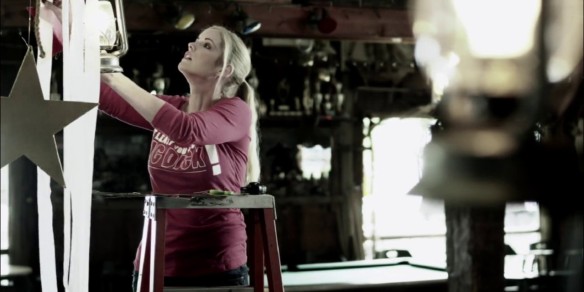 It goes without saying that the first positive thing about Pinup Dolls On Ice is Geoff’s willingness to take another shot at the Slasher format,  to try to rectify what went wrong the first time. It’s easy to get deterred by those who think poorly of your film but in the end those people (myself included) have never made anything so we don’t know the hardships involved, although speaking to a lot more filmmakers and people in the industry I’m starting to gain more insight into the business. I read somewhere that Klein and Actress/ Co-Director Melissa Mira, chose to finance it themselves and really spent the required time and effort to make it the best film it could be. At the forefront of this sequel is Penning’s carefully written Moe. More vicious than ever and portrayed with vigor by Jarand, something that didn’t figure prominently enough in the previous film. Although it’s pretty cookie cutter detailing, we finally get an extensive amount of back story on Moe’s childhood and how he acquired his fascination with ice. I could feel Jarand’s demeanor this time around, bringing the character to an all new level with every grunt and berserk outburst. I’m not sure if that’s simply down to superior writing or Jarand approaching the character and his mannerisms differently.

This was shot in Lancaster, Ontario and I really enjoyed the setting. A simple location, camp grounds and an isolated bar but effective all the same. It made for more interesting scenarios and action than the gas station setting of the first film. The quality and style of lighting was another huge step up. The bar in which majority of the film is set, makes for an easier approach to the lighting. Most of the camera work was vastly improved as well, some nice early panning in the opening scenes with Kristy (the gorgeous Ashley Laventure) along with smart and snappy shot choices as things progress. The audio is extremely clear and if memory serves me correctly that was one of my biggest gripes previously. I’m assuming some ADR was done (additional dialogue recording) just to get the consistency in changing locations, either that or Gordon Neil Allen (one of the dialogue editors) really knows what he’s doing with audio. It was nice that all the sound effect impacts were blisteringly loud and in sync during the action sequences, it helped sell the raw nature of these kills. Let’s talk about the gorgeous women on-screen because they are truly something. It’s by no means a stretch to have these women playing burlesque style dancers because each of them are sexy in their own way and sell it convincingly. There’s some T and A for the male audience, sadly there’s not much to see for the ladies (other than other ladies if that’s your thing). Ashley as Kristy sets the sexual tone by baring all before an intense chase sequence, leading to a graphic climax (pardon the pun).

The group of sassy women is made up of Fiona (Kerr), Caylin (Shinkewski), Malone (Mira), Vivian (Antoinette) and Lauren (Crighton). Each of the ladies are quite compelling as they fight their way through the night, some lasting longer than others but all refusing to go easy. Those are the type of strong female characters audiences want to see and were the same ones missing from Klein’s last film. For me Kyla and Melissa gave the two standout performances and each for different reasons. Kyla’s Caylin was just extremely likable, probably one of the nicest and most mature of the group with such a strong will to live. Melissa plays the opposite persona. She’s much more of a hard ass and ruthless type, which made for an extended and interesting showdown with Moe in which we got to see Mira’s impressive acting chops. Gore hounds will be happy to know that this time around the practical blood and gore effects hit early and flow a little longer. In my opinion, the standout action sequence occurs in the first 15 minutes but later there’s also some pretty messy prosthetics. The attention to detail in Moe’s dwelling was grungy and personal and all the aftermath effects provided the most visually. I always like to see more on the blood and gore front, there were several different options they could have gone with for killing characters off but chose to cut away (maybe due to budget). I figure with such a strong deranged killer, the kills should have been even more forceful.

Pinup Dolls On Ice probably meets its quota on the red stuff, sadly the same cannot be said about the consistency of suspense. There’s a handful of telegraphed jump scares that you’ll see coming a mile off and the overall tension is clearly lacking. It’s a difficult thing to gauge in a Slasher film  because for the most part people just want to see the kills, that’s what they pay for. I however, like some solid suspense for the moments that aren’t about the blood flowing but seldom do they get it right and it’s hard to please everyone. The music was the other quality that didn’t do much to convey the fear, most of the score was extremely mellow and sappy, it sounded completely out-of-place. Once things start to escalate there isn’t much dialogue, at least nothing of importance but some of the conversations between the group while setting up their arcs, were a little crass and immature. For a movie with this many lovely women in it, it wouldn’t have gone astray to include at least one sex scene too. There’s a handful of finer points in the writing that I wasn’t completely sold on either.

Clay (played by Popoff) is the token, sleazy creeper that works at the bar but other than adding to the body count his character served little purpose. I preferred that this was basically an all female driven movie because there aren’t enough of them being made. The Sheriff character who clearly had a past connection with the bar owner Joy, seemed to know a lot about the escalating situation yet he couldn’t put two and two together about what was actually happening, or who was responsible until it was way too late. He knew all about Moe’s back story and congruent modus operandi, so I found that pill a little hard to swallow. I won’t mention names but one of the girls whose arc is seemingly setup for her to become the “final girl” of sorts, is written out without warning (bar a very brief flashback). Now up until that point of the film she was by far the most respectable character, I feel like the audience needed to feel that shock and loss with much more of an impact. Her friends don’t even feel it so how can we? The last plot point, and this is just a personal preference more so than anything else, I don’t agree with sexually related violence depicted on film unless it serves a particular purpose (mostly in exploitative genre films). It wasn’t a crucial aspect to the story or inner workings of the character so I think we could have done without it.

I had my reservations about Pinup Dolls On Ice but I tried my best to go in with an open mind. In the end I was more than happy with the result. It’s a worthy entry into the Slasher sub-genre and comprehensively better than its predecessor. All the technical aspects were far better developed and included neat camera work and wonderful audio/sound effects. Michael Penning’s writing was quite detailed and William Jarand was able to raise Moe to the heights he should have reached in the first film. All the girls are gorgeous and believable as burlesque dancers while still turning in consistent performances. Lastly, there was clearly more time and money spent on practical effects and better choreographed kills because it shows. Other than some stale music and a lack of tension made more noticeable by routine jump scares, most of my issues lie within details of the script and the writing continuity. I want to thank both Melissa and Geoff but predominately the latter, for taking another stab and coming up with a far superior film. Filmmakers should place a great deal of emphasis on improving their craft and that’s exactly what Klein has done here. The hard copy should be out in the US and Canada very soon and I suggest you check it out if you like independent slasher flicks.