ATTACK OF THE GORILLA

Firstly, I just want to say thanks to Julian Francis Adderley, the producer of “Attack Of The Gorilla”, for inviting me to watch and review the film on Vimeo On Demand. Before I begin, I want to give my best wishes to the friends and family of, director Dave Shaw, who recently passed away. As well as playing Riggs Deardon, one of the main characters, he also wrote and directed this film. My sincerest condolences to those who knew him. Attack Of The Gorilla is a comedic homage to the 50’s b movie. Monster flicks that were all the rage, made by the likes of Roger Corman, Nathan Juran and many others. Anna (played by Sara Duplancic), discovers that some of her friends and family are becoming victims of  a killer gorilla. Along with her sarcastic, but logical thinking boyfriend Stephen (Francis Fisk), she enlists the help of alcoholic, former tv show host Riggs Deardon (Dave Shaw), who faced a similar beast many years ago. Also joining the hunt is Rigg’s ex-wife Mimsy (Sherry Thurig), and the daft local cop, Officer Landis (Paul Washer). Will the gang be able to stop the gorilla before it’s too late??. The film also stars Penu Chalykoff, Jenne Hicks, Kiersten Hanly and Julianne Carioto.

The estimated budget for this 70 minute full length feature is just $10,000, the production value is pretty good, given the small amount of money. I watched the trailer before I saw the film, so I had an idea for what I was in for, but I’ll admit I thought this was going to be more like a 50’s b film, it was but it wasn’t. It’s clear that Roger Corman’s work was the biggest inspiration for Attack Of The Gorilla. It’s a difficult movie to review because it’s so self-aware, that it does everything but wink at you. There is nothing wrong with a self-aware film but if you’re going to do that, you have to pull out all the stops and match whatever it is you nod too. Step number one, shooting in black and white. That’s exactly what Dave Shaw and cinematographer Julianne Carioto have done, and it looks nice. Though, they opted for the static film reel look, combined with the black and white that then negates that 50’s style and makes it look more like a grind-house throwback. A lot of the still shots in the camera work are good and the cheesy, over the top (on purpose) acting and fun dialogue works for most of it. 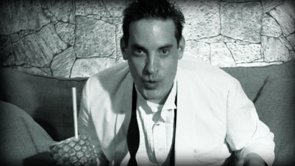 Majority of the comedy and breaking the fourth wall was a bit too obvious for my liking. I’m not a huge fan of that acknowledgement, unless it’s done in the appropriate genre to suit it. The intermission pornography film gag was cool. It had some good one liners and a genuine awkwardness, making it one of the funnier parts of the film. The best thing Attack Of The Gorilla has going for it, is the unbelievable mystery/sci-fi sounding score. It sounded like it was straight out of the 50’s, also combining an X-files meets Twilight Zone feel. I’m not surprised that it’s the aspect of the film that won an award, its awesome! It’s not often you hear a score the entire way through a film, but with a run time of only 65 minutes the constant fits.

I already touched on the look of the film that the black and white looks awesome, the static stuff however, does not. In many of the scenes the actors faces are framed far too close up, that you lose everything else in the scene. I understand most of the locations are small but I think the crew just needed to take a few steps back and not shoot so close. Some of the audio levels were quite inconsistent, most noticeably in the different locations and also when characters were screaming. The action sequences are supposed to be cheesy I get that, but I didn’t realize they were going to be so far-fetched and silly in nature. The gorilla is just an actor in a suit, I’m not going to critique that part because it was clear that was the intention, I just think it looks poor. I thought this was going to be more of an homage, I don’t ever remember them going that over the top in years gone by. Some of the facial expressions early on, from secondary characters like Anna’s sister in particular, were embarrassingly bad. I’m assuming that was on purpose, none the less not anymore enjoyable to watch. 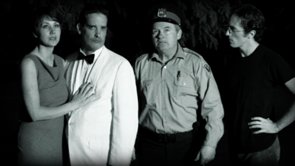 Another positive point was that a few of the characters really embodied that old movie feel. The reporter for one, acted with the perfect amount of tongue in cheek, and even used lingo that would have been heard in a 1950’s film. Unfortunately, on the opposite side of the Police Officer and News-reporter, we had multiple uses of the F word and it’s derivatives, which took me right out of the experience. They didn’t talk like that back then maybe that’s their modern spin on it, I don’t know. I think most of the comedy fell flat, a lot of that low brow kind of humor, and I’m not sure what was going on with the days of the week, I guess that was supposed to be funny but it just confused me. Come to think of it, the editing, and those days of the week seemed to mess with the continuity of the whole film. When you have to use the same location for two or three different settings, (due to budget restrictions), it can confuse matters even more. 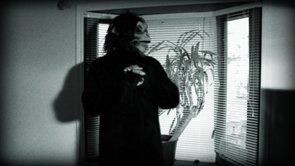 Attack Of The Gorilla is aimed at a very specific audience. I think if you dig those extremely self-aware films, than you’re going to have fun with this. However, I don’t think it gets enough of the things it’s nodding too correct. I love the black and white style and the score is brilliant. Unfortunately it doesn’t excel at the modern spin of a b-movie and it doesn’t bring enough of that 50’s feel, to really label it a throwback. This film was dedicated to Dave Shaw. I didn’t know him, but he looks like he had a blast doing this with friends and family.Seeing it come to fruition is something to be most proud of. Just because it’s not for me doesn’t mean there isn’t fun to be had here!