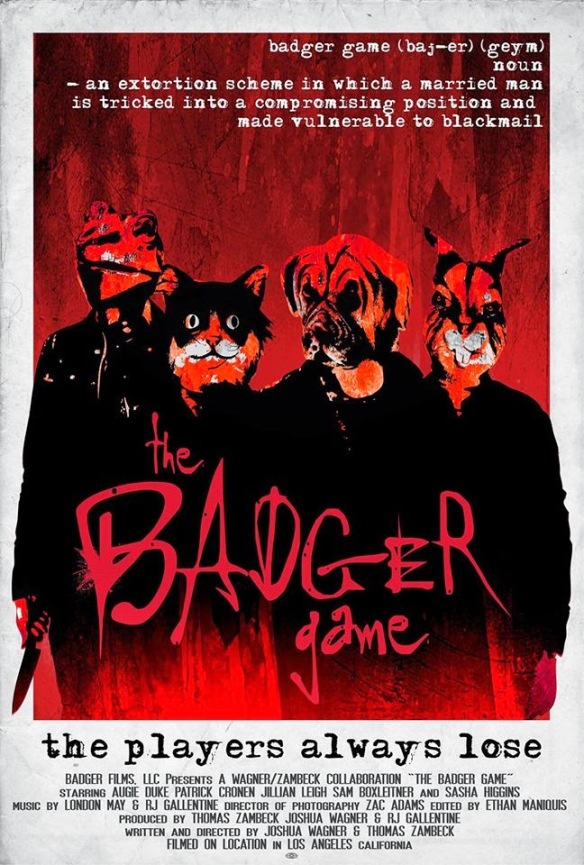 Firstly, I’d just like to say thank you to Co-Directors, Joshua Wagner and Thomas Zambeck for allowing me early access to an online screener of their latest film “The Badger Game”. I’ve been following the film for about a year, so it’s nice to finally see it getting closer to a wider release. The Badger Game is a particular scheme to trick a married man, putting him in a compromising position and leaving him vulnerable to blackmail. Liam (played by Sam Boxleitner), is a successful businessman who seems to have it all. The good looks and smooth talking, plenty of money and a supposedly happy marriage. That is, until he’s targeted by four masked strangers seeking compensation for the wavering commitment to his family and two of them. Shelly (Jillian Leigh) and Alex (Augie Duke) are friends from way back, but have drifted apart over the years. Alex has called Shelly looking for help with the situation. She claims to have been seriously involved with Liam, and enlists her brother Kip (Patrick Cronen), along with another scorned lover Jane (Sasha Higgins), to help swindle $2 million from Liam’s private accounts. What starts as a simple grab and blackmail easy money-maker, quickly spirals out of control when personalities and relationships come to a head. I’m guessing the film’s estimated budget to be around $500,000, but don’t quote me on that. It also stars Mark Siciliani, Josh Eichenbaum and Aria London. 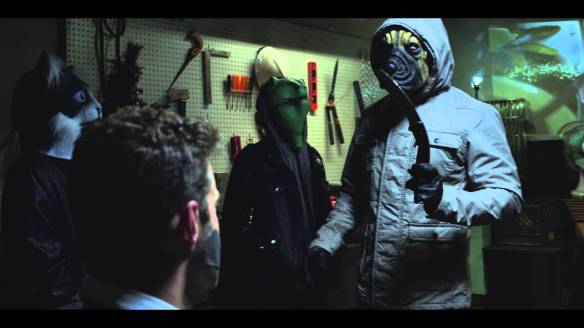 The Badger Game opens with a repetitive quirky, bass and symbol score as a detailed definition appears of what is about to take place. Normally you may think having something spelt out for you is going to ruin any surprises, but that’s not the case here. I think it’s imperative that initially you know what the core of the story is. Everything else can and probably will be made known to you, throughout the rest of the film. That particular part of the score that’s used on several occasions, reminded me of that recurring Jazz sound used in the Oscar-winning “Birdman”, it was a nice touch. Some of the early edits and scene transitions were great. For the most part, the shot choices were smart and the camera work fluent. The audio track was crystal clear, and given this relies heavily on interactions between the group as well as conversations that involve Liam, it was of the utmost importance you knew what was being said. Majority of the sounds were conveyed with just bass and parts of a drum kit, it didn’t have any of the classic Horror/Thriller music we’re used to hearing. If I’m honest, I think some more diversity in the soundtrack would have been a good thing, especially to give it more of an impact as things build to the finale. 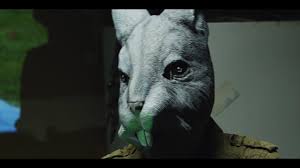 Some of the cast looked familiar, but after doing some research I realized that I hadn’t seen any of them before. Most of the acting is solid and consistent throughout, probably aided by the natural chemistry of the group. Alex and Kip had some simple but honest banter and Jillian’s job of Shelly, conveyed that isolation, the back against the wall type of behavior. She was easily the most likeable of the bunch though. Much of the best dialogue comes from Kip during his multiple interrogations of Liam. Speaking of Liam, he was written in such a way that you couldn’t help but despise the guy. You could see through what a liar he was, I was sitting looking at the screen like, Are you serious? This is what girls go for? Unfortunately yes. That is often what they go for (haha). Some of Jane’s dialogue didn’t seem important enough in moving the story along, and probably could have been cut. I also enjoyed the fact that these guys and by that I mean not just Joshua and Thomas (haha), but the group as well, didn’t make any real boneheaded decisions. Everyone can understand and give or take a bit when it comes to creative license, but often these types of films stretch the plausibility factor beyond its limits. This group of four made sure before they did anything, they had masks and plastic gloves and covered their tracks, all that stuff was good. 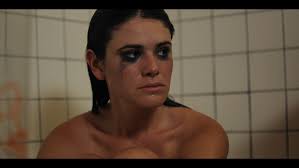 The standout aspect for me when it comes to the story/script, is in the way one of the secondary characters is introduced (or to be more accurate), not introduced (haha). Ordinarily I’m not a fan of abrupt cues or revelations within the story, especially if they don’t have context. I feel like most things need to be explained (within reason of course). Directly or Indirectly, Wagner and Zambeck have taken the brilliant approach to that of the Coen Brothers (Blood Simple and No Country For Old Men), choosing not to openly introduce an important character that eventually comes into the mix. It’s not often something that’s given much thought too, so I thought I would reference that reference in this review (haha). I really respect the way in which that was done and if you watch carefully, there’s an acknowledgement of said approach earlier in the film. I just want to touch on “You’re Next”. It’s one of my favorite home invasion horror films, so it’s hard not to make comparisons between that and the masks in Badger Game, minus the fact that they are over sized (haha). I know that animal masks have been a gimmick for a while now and people are sick of it. I for one though, don’t care how many times they get used they serve their purpose.

Well into The Badger Game I was thinking, if this stays the course it could be top shelf (I mean that figuratively and literally), it would actually go into the top shelf of stuff I own (haha), but sadly it won’t. Most of the hangups are either technical or a bit nit picky, so keep that in mind. Some of the shots early on in the film that I’m guessing were supposed to be still shots weren’t. Unfortunately, when the camera was stationary it was bobbing up and down ever so slightly, but enough to be distracting. As I previously mentioned, some of the lines especially during the more intense scenes involving Liam, didn’t quite hit the mark. The opening act has some excessive and slightly unnecessary profanity too. Normally that kind of thing doesn’t bother me if it’s in the context of the film, but at that particular point it wasn’t because nothing had really escalated. From a technical point of view, the only thing really holding the film back is the lack of prominent lighting. I understand that sometimes it’s the filmmakers decision to light, or in this case to not light something in a particular way. However, ninety percent of this film is set at night and there are several scenes where the audience has to be able to see whats going on. The scenes on the road, in and outside the bar and of course the basement of the house are all problematic. Who knows, this could just be me, I just know what I like to see and sometimes lighting something subtly works, but other times you just want to see what’s happening, each to their own I guess. The film-making facet of things is obviously only one piece of the puzzle. The other crucial things that let The Badger Game down a little, fall on a lack of suspense and some revelations in the script direction and tone that didn’t fit. 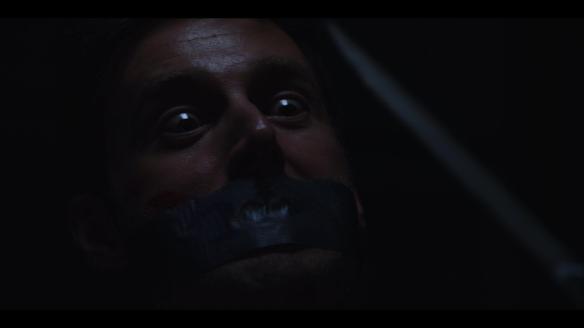 The action is scarce but when it does go down, we get some pretty cool practical effects and blood. This one plays out more like a mystery rather than delivering anything with a shock value, therefore the tension and suspense level needs to be high, and it’s just not. Every time I felt like things were progressing and building to something, they either didn’t or I didn’t feel that change strongly enough. I was hoping for a more tense and accidental meeting for Liam and Shelly. It feels like the viewer comes in half way through their conversation (actually kind of did haha), of course it’s part of the plan to make it easy for him to woo her, but the sequencing could have been tidied up. A couple of minor issues stood out as it got further into the film, simply for the fact that most of the bases were covered and they had done things well up to a certain point. I was thinking that one of the group probably should have been watching Liam at all times. Often it’s that everybody takes a shift and they rotate. A similar problem when they are in the kitchen, rather loudly discussing their next potential move. Unless the walls are sound proof or they blocked his ears, it’s not a stretch to think he might hear them is it? Considering they were smart about a lot of things, those couple of times they weren’t. The sudden transformation of Kip’s character arc is what ended up being the kicker for me. It was reminiscent of Pat Healy’s character in “Cheap Thrills”. I suppose the two were in similar positions, but still. We know very little about Kip up until the final act, so when things go south and behavior changes naturally we are going to think it’s out of character for him. It seems a little convenient to just throw in some late exposition about who he’s been or what he may or may not have done, you’d think we would have known that before they planned anything. Even though he was the typical jerk for a fair chunk of the film, he was often funny and mostly likeable. Sure, he wanted a cut of the money like everybody else, but he was doing the right thing in looking out for his sister. The last ten or fifteen minutes of the film there was that definite change in tone and I don’t think it was for the better. 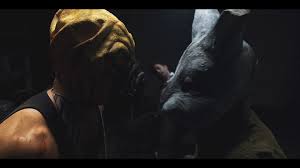 The Badger Game at heart is much the same as a few of my favorite Crime/Thrillers, such as Sam Raimi’s “A Simple Plan” as well as, The Coen’s “Blood Simple”. Luckily, I never get sick of the blackmail, the revenge and the twist that compliments these types of films. It’s nice to see a bunch of fresh faces performing pretty well. The camera work and audio were first-rate, and some of the writing was a perfect mix of originality and nostalgic tip of the hat. Regrettably, it’s the inconsistent and often dark lighting, along with some holes in the plot and a missed opportunity to create more suspense that hurt it. The unfavorable direction change late in the piece, ended up dampening my overall enjoyment a bit, and hence my rating. Commendable effort though guys, I’m hard to please and anticipation and expectation will forever be a tough thing for any of us to live up too. Well done guys!