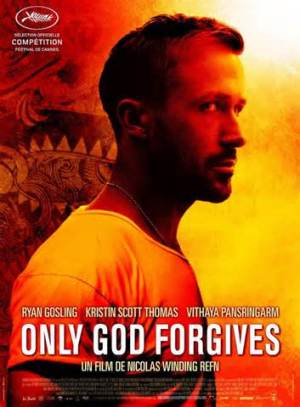 Nicolas Winding Refn (Drive) reunites with Ryan Gosling in  “Only God Forgives”. This is a very loosely based follow-up to the 2011 hit film Drive. The only aspects or reasoning for making that connection could be the violence in this. It could be Gosling’s character and the comparisons to that of his role in Drive. Julian (Gosling) is a drug smuggling thief who is living a life of luxury in Bangkok. He runs a small time Thai boxing club and deals drugs on the side. His brother Billy, played by Tom Burke rapes and murders a young girl. Due to the laws in Bangkok he must suffer the consequences for these crimes. This puts an ex cop, Chang on a collision path with Julian and his mother Crystal played by Kristin Scott Thomas.

Julian is portrayed as a very misguided and lonely person living a life of isolation. He has a prostitute that he pay’s to fulfill his fantasies and dreams. From what we see, he has little to no relationship with his mother or his brother. We know nothing about Julian’s background. What have his experiences been? Where has he come from? Or deep down who he really is. Gosling’s character says very little for the duration of the film, possibly less than he did in Drive. Gosling does all he can do with this painfully dark, bland character. People making comparisons between Julian and The Driver (his character in “Drive”) need to take a closer look at the characters. Yes there is a lot of mystery surrounding both the characters. In “Drive” that works because The Driver represents good, he is the protagonist. We don’t need to know his motivations or his life story etc, we know he represents good. Julian doesn’t seem to possess any likeable characteristics. If he is the film’s reference point, he needed a human quality for the audience to connect with. 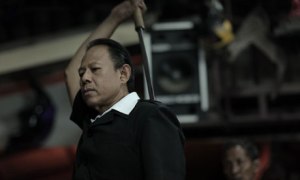 Then we have Chang, I can only assume he is an ex-cop? He seemed to be very friendly with the current police force. It was never divulged if he was still a cop, so who really knows? I can’t decipher what his motivation was for getting involved with a rape/murder. Single handedly deciding the fitting punishment, and then investigating every person in the life of the villain? That would make sense if it was an investigation. The villain is dead? I can’t see the point in that process. Kristin Scott Thomas appears at the closing of the first act of the film. Supposedly she has come to bury her son. This is another example of a half written character. She show’s no emotion whatsoever towards Julian, or anyone for that matter. She appears to have some kind of incestuous relationship with her son… She is a very crass, cold human being. I suppose it gives you some insight into Julian’s upbringing but not enough for you to understand his actions. All in all not a single character’s background is discovered, investigated or shown at all through flashbacks. We have nothing to connect too. Characters disappear for several chunks of the film without warning or explanation as to what they have gone to do? It just lacks any continuity or any real plot. At its core it’s a revenge story but without the story aspect. I didn’t think the violence was overbearing, it was within the context of the “story”.

However all that aside, the film does look and sound fantastic. I’m a huge fan of Refn’s musical score, his camera work and the atmosphere he is able to create. He did it in Drive and he has done it again, good work. The whole film is shot in a dream like state, unbelievably surreal. So many aspects of this remind me of David Lynch’s work in “Blue Velvet” and “Lost Highway” and for the most part it looks good. He probably lingers on slow motion capture and long empty hallways covered in mandarin styled wallpaper for too long. These are almost like montage scenes. They are beautifully lit with fluorescents but they do wear out their welcome after a while. Even the way the characters walk in this film is artistic and dream-like. It’s either in slow motion or at times almost like a dance. It can get a little tedious when it’s overused. Likewise with the score which is crafted with wonderful synth, keys and low-end bass and treble. There is such a contrast between the bass and treble in the suspense and violent scenes. Then parts of total silence fading in to synth for the more erotic scenes. Speaking of which, it was unclear as to if the sexual scenes were memories, fantasies or were they taking place?

At several points throughout the film we have distorted sound and repetition in dialogue. The exact same camera shots are used in several scenes and nothing new in the frame. Too often the film feels like it’s moving in slow motion. We also get several random musical numbers in karaoke bars. I couldn’t work out if they were taking place in the future, the past or never really took place at all? I never did find out. These are all signs of things you would see in an art house film. Once again this is the second time this year I think one of Gosling’s films has been completely mis-marketed.

To sum up we have all the technical aspects close to perfect for this genre of film. It’s a shame it’s not the genre most of us were expecting. I was hoping for a solid follow-up to Drive, but “Only God Forgives” has absolutely no connection to it. Drive was always a unspoken love story under the surface of a Crime film. It had amazing music, was beautifully shot, subtly violent and just simple. “Only God Forgives” is full of style but has no continuity and no substance. It’s a mess of a film with strange sexual erotica, musical numbers, horribly choreographed fight scenes and nothing really positive to say. Nicolas you are not David Lynch, you have your own style, stick to it. I’m most disappointed by this. it could have been something special.