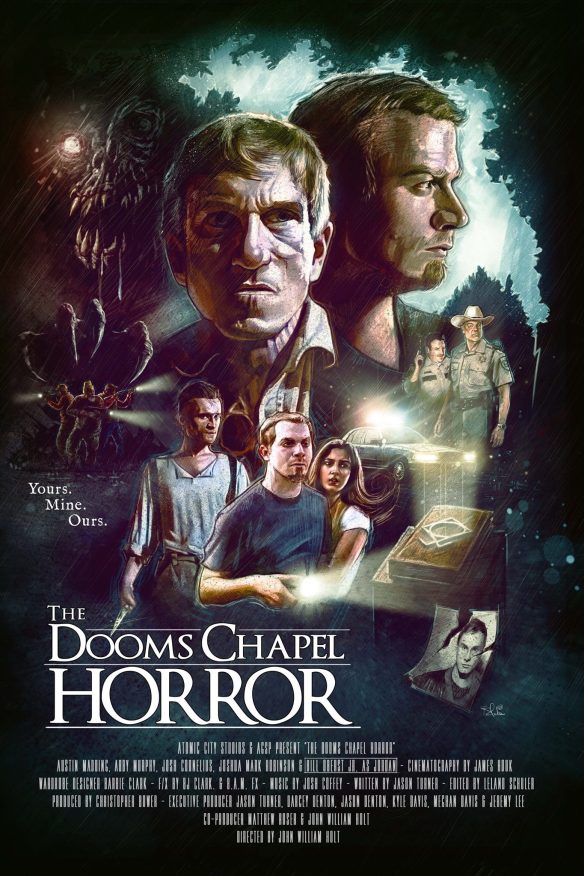 Firstly I would just like to say thank you to Christopher Bower, producer of the indie film “The Dooms Chapel Horror”, for allowing me early access to the film via an online screener. Dooms Chapel Horror is the first full length feature from director John Holt, who had previously only made a handful of shorts. Kyle Cole (played by Austin Madding), along with his girlfriend Mandy (Abby Murphy), are returning to Kyle’s hometown of Kaler Mills for the first time in ten years. Years earlier, Kyle was ostracized by the town and ultimately held responsible for the death of his older brother Ryan on the families property. Tanner (Shaun Gerardo), is a friend of Kyle’s whose tagging along shooting a documentary about Kyle’s return, in the hopes that Kyle can face the demons of his past in order to move on with his life. What he ends up facing could be much, much worse. The film also stars Bill Oberst Jr, Josh Cornelius, Joshua Mark Robinson, Steve Crowley and William Ryan Watson. I’ll be honest, I didn’t know much about this film before inquiring about it. I’ve been following Bill’s body of work for a while now, and that was my main reason for checking it out but it’s always good to support someone making their first film anyways. 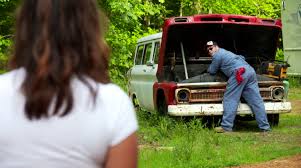 I’ll start with John’s handling of some of the technical aspects of the film. It opens with some home movie footage, that was shot by a younger Kyle, as he shows us around the Cole’s property, giving us a look at the family dynamics. He talks for a short period of time with his brother and parents before he’s asked by his father to go and help Ryan. Before he can do so tragedy strikes. I enjoyed the way in which that 10 years plus old footage was shot, and how we get to see (in a way) what has happened, before we are introduced to Kyle in present day. The rest of the film’s camera work and shot choices are a bit of a mixed bag, I’ll talk a bit more about that later. After the opening segment, there’s a cool bluesy slide guitar, piece of music to accompany the opening credits. With the film primarily taking place in Kentucky, it fit the tone nicely. For those who are interested, this one was shot for an estimated budget of $50,000. I was hoping for more action than what I got, but the stuff we do get to see looks impressive. It’s all done practically and the crew don’t skimp on the red stuff, when it’s warranted of course. Nearly all the kill sequences take place during the last act of the film, with the first three-quarters playing out more like a Crime/Drama, a little reminiscent of “Blue Ruin”.

The Dooms Chapel Horror’s best attribute lies in the casting, and the caliber of acting. Like I said, my main reason for checking the film out was Bill Oberst. Those of you readers who are not familiar with him or his body of work, feel free to check out my reviews for Valley Of The Sasquatch, Ditch Day Massacre and Circus Of The Dead. They are just a few titles that he’s appeared in of late. I originally took an interest in his work because of the variety of different projects he’s been a part of. Being known mostly of course, for his work in independent horror. I rate him, he seems like a great and humble person, he’s also one of the hardest working actors in the business and I have nothing but respect for that. In DCH, Bill plays Jordan, a key figure in the small community and an Evangelist of sorts. Along with his son Samuel, at least I think it’s his son?? (Robinson), these two are dangerous and believe Kyle owes them something that they will stop at nothing to collect. I thought the acting from everyone involved here, was a cut above most of the low-budget stuff these days. Austin and Abby’s scenes were quite dynamic, and I found her to be really likable and empathetic throughout the entire ordeal, which had nothing to do with her in the first place. Josh Cornelius as Henry, Kyle’s childhood friend was also one of the most identifiable, just your everyday guy wanting to help a friend out by doing the right thing. Once again, mad props go to Oberst for his precise performance, of yet another interesting and I’m sure multi faceted character (if explored that is). It’s unfortunate that other than a stony monologue from Jordan to the younger Kyle in a flashback sequence, I didn’t get to learn a whole lot else about him or the situation.

Most of the issues that I had with Dooms Chapel Horror were technical ones, in addition a few elusive hitches in the writing and ultimately I have to question where exactly this film fits. A few of the aspects are minor, such as some inconsistent audio levels when it comes to certain scenes of dialogue. I also found a lot of the music choices felt out-of-place, they were less suspenseful than I thought they’d be and fixated more around the drama. The problem was, that because of a lack of character background or motivation the drama didn’t feel centered enough. Several of the transitions in editing felt a little rushed or convenient as well. Multiple scenes should have been cut in length, and others extended somewhat etc. Before I get to some of the unanswered questions and hang ups I have with the writing, I want to talk a little bit about camera focus and the choice to switch styles half way through, when it doesn’t fit your initial setup.

My problem is not that John chose to shoot a fair chunk of this film from Tanner’s point of view, as he interviews people from the town and chronicles Kyle’s movements. It’s that artistically that gets abandoned towards the climax. I think it’s safe to assume that nobody else in this film had a camera, I didn’t see anyone pull one out at any point, but forgive me if I’m wrong. Therefore, it’s kind of illogical to have the premise of your film be about a documentary crew (well basically one guy), but if and when anything happens to that guy where it’s no longer plausible shooting like that, begin shooting like a conventional movie instead. Personally, I think a style needed to be chosen and stuck with for the duration. Instead we get to see a handful of scenes shot from surveillance cameras in the woods and someone else operating a camera when the final showdown hits, Who’s behind it? I don’t know. At one stage a group of characters are running through the woods from an unknown evil, and it’s being recorded from several different feeds. None of which are established at any other point during the film. It’s not like Tanner goes and scatters a whole bunch of go-pro’s or smaller cameras in the surrounding area to document what goes down, so I don’t know what happened there. In the final act Kyle has a camera on his gun (which is fair enough), but as he is having the confrontation with Jordan and Samuel, someone else is shooting that scene, Who?? It’s not Tanner, because I think the duo would have noticed and would have done something about it. So that camera has just appeared, as though this isn’t the style of film that’s already been established it is.

Making matters worse, are the constant focus issues when it comes to the handheld stuff throughout most of the film. It’s like John was adjusting back and forth, to gauge the appropriate framing in each shot as they were filming. If so, that’s not a good technique. There needed to be some testing and planning when it came to that. The incessant regulating drove me nuts, and once i noticed it I couldn’t regain focus (pardon the pun), on the story itself. When I finally got back around to concentrating on the inner-workings of the writing, I found myself with far too many questions. Firstly, why are they documenting his return to Kaler Mills in the first place?? After what Kyle had experienced with the town’s judgements, and his addiction to shooting videos, I’d think turning the cameras on himself would be the last thing he would want to do. If it was all simply in order to face his past and move on, than it seems overly simplified. I wanted to know more about Kyle’s dealings with Jordan, something more than just one flashback scene. What did he actually owe him? And why did he owe it? I know there was talk of a list of people who Kyle felt betrayed him during the events with his brother, but that can’t be the only thing, surely? The details surrounding the “chapel” and it’s demon was incredibly vague. I haven’t a clue what was going on there. Leaving a few questions unanswered isn’t necessarily a bad thing, but it depends on the film’s desired effect for audiences and I think in this case it needed some clarity. Dooms Chapel Horror is very much a slow-burn, and a little too slow for my liking. The performances keep you somewhat interested, and the final 15 minutes is fun but ultimately not quite the payoff I was looking for.

I wanted to like The Dooms Chapel Horror a lot more than I actually did. In places it resembled the indie/ cult film “Jug Face”, but its slow nature and overall pacing issues made it feel sluggish. With some solid casting, and commendable performances from all, especially Bill, I can’t help but think this could have been a lot better. I think John could use a little work and experience on the technical front, and make some concise decisions and see them all the way through. He can only work with the script he is given and unfortunately this one doesn’t dig anywhere near deep enough for me, but that’s just me. If you enjoyed Jug Face, and you’re partial to a slow-burner you might see something here that I didn’t, so please be sure to support these guys! For me, It needed to be grounded in a clear-cut genre, instead this tries to pile on family drama, crime, cult related horror and a monster all in the blender at once, and sadly it doesn’t excel at any one of them. Thanks again Christopher and Co, for letting me check the film out I really appreciate it and sorry I couldn’t say more, I look forward to what comes next from these guys.