Back in 2011 a film by the name of “Bunnyman” caught a select group of slashers fans eyes, including mine. The reason for that was mostly the ridiculous notion of a man in a soft bunny costume killing teenagers with a chainsaw (haha). I know what your thinking, this sounds similar to a popular franchise we all know doesn’t it? But folks, that’s okay because most of us are not expecting originality within this genre anymore, these days everything has been done to death. It’s been a while since I saw Bunnyman but if my memory serves me correctly I thought it was a very average film. The concept was kind of cool but the execution and entertainment level just didn’t reach any great heights. However, when I found out that Bunnyman 2 was on its way and claiming to deliver everything that the first film didn’t (at least to me), my interest was peaked.

Carl Lindbergh gets behind the camera again in “The Bunnyman Massacre” or “Bunnyman 2” depending on where you are in the world. I won’t talk about the original film so as not to use spoilers for those who haven’t seen it. In this sequel the adventures of Joe (played by David Scott) and Bunnyman (Joshua Lang) roll on, they continue to set up various traps luring tourists and campers into the area hoping to add to their ever-growing pile of bodies. A couple of sisters, Lauren (played by the lovely Jennifer June Ross) and Sarah (Julianne Dowler) are hiking in the nearby woods when they are forced to be part of a sick game of cat and mouse with Joe and his psychotic bunny. It’s a disturbing relationship between Joe and Bunnyman but Joe needs him if he is going to continue to supply the county with his special “beef jerky”.

First of all lets start with this awesome looking 80’s style poster of the Bunnyman and his chainsaw, if that doesn’t get your foot in the door than nothing will. I love the costume, especially the head because every look the bunnyman gives is really left to the viewers imagination. In several scenes he looks sad (if that’s possible haha) but you never really know what he is thinking or feeling. The introduction involves a simple little trap and a school bus full of middle schoolers, I won’t spoil it but I will say it’s a blast. The only film I’ve seen that incorporates a similar scene involving kids was another indie slasher film called “Deadly Detour”. Bunnyman begins by ticking the boxes in the nudity and  body count department. Both of those key ingredients feature in the opening 20 minutes of the film.

The camera work is very crisp and smooth and the audio for the most part is pretty good too. It’s a little inconsistent in a few places but fortunately a lot of the dialogue isn’t that crucial to the details in the story itself. I liked that this was almost a stand alone film, other than a couple of flashbacks in one of Bunnyman’s fits of rage, it’s an entirely separate story. I thought Jennifer June Ross was a delight to watch in the role of Lauren. Lauren is the main protagonist of the film, you can really get behind her and root for her good-natured, fighting spirit. There is no denying the influences Carl must have from The Texas Chainsaw Massacre films, along with plenty of other great 70’s and 80’s films within the genre. Some of the sound effects and score are directly out of TCM there is no denying it, along with introducing the beef jerky supply sub-plot (can anyone say Motel Hell??). It’s one thing to have a nod or two towards what inspires you but you can’t directly use material that’s already been done. Personally it doesn’t really bother me when someone does a bit of cut and paste work just as long as they don’t attempt to pass it off as their own. I don’t think Carl is doing that here and I think it supposed to be pure entertainment and that’s it.

To be completely honest once the credits started rolling I felt a little disappointed. Now that’s not to say the film wasn’t enjoyable and competently made. I think its simply a combination of what I had built up in my head and the lengths that the film goes to too truly entertain, or doesn’t go to in this case. For starters some of the editing is lazy and the way in which the scenes transition, showing views of the horizon and tree leaves swaying in the wind with sped up time, it’s pretty lame to be honest. The suspense in a lot of the action sequences misses the mark as well, it’s something that films of the 80’s did a lot better than modern films. Some opportunities to have kept solid continuity were missed. One scene in particular where a couple of the girls are stopped by Joe and Bunnyman and talked too, then the very next scene they are tied up in the shed. It may have been an idea to incorporate Joe hitting the girls over the head and knocking them out, or anything for that matter just to indicate to the audience what went down.

I’m a huge fan of inventive kills with the chainsaw and although this one has enough action with the weapon itself, I would like to have seen them executed better. You can often tell the chainsaw is by the side of the actor and someone is just squeezing the blood out of a tube from outside the frame. I’m not sure of the total budget for this film but early on several kill scenes have great practical effects and blood spraying on the camera etc. So my question is why resort to cheap CGI blood later in the film?? why not continue using the real stuff and do some gags with a full body cast or prop stomachs or heads? there is a bunch of different and cool things that you can do, so I’m not sure why the crew made some of the choices they did.

The films main issues are the inconsistencies in the acting from most of the cast and the plot itself. For example, David Scott playing Joe is solid for the most part. But I’m not sure if it’s the accent he uses or a combination of things but he lacks the real menace that you expect from your despicable character (think TCM Sheriff Hoyt). Don’t get me wrong there is nothing to like about the character of Joe, he has no redeemable qualities but he needed to be much more of a hard man played with more grit. Some of the girls overact as well and fail to deliver the more emotional scenes convincingly. In a purely fun low-budget movie I expect these sorts of issues though. The other problem is that the story lacks any real clear plot. It’s almost like they had the two evil characters, a group of girls and then said lets just kill a bunch of people (haha). Now that’s okay but you need to incorporate some kind of clear narrative so the audience knows where the story is going. Because when you expect a really cool showdown in the last act you end up getting a rushed flat and non thought out ending that leaves things on a disappointing note. 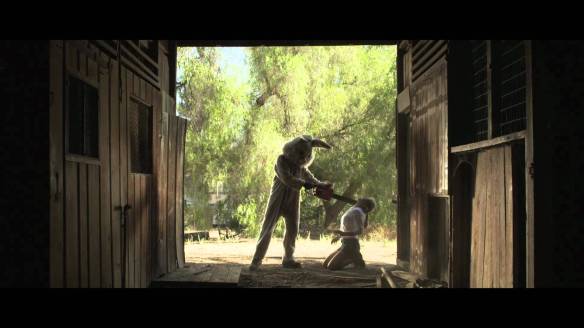 Let’s face it, “The Bunnyman Massacre” probably isn’t going to win any awards but does that mean you shouldn’t watch it?? hell no! It’s technically well made, you get a killer that’s going to be remembered for years to come and some great early kill sequences with some cool practical effects. I just wish the second half of the film had the execution that the first half had. I say it again, if you have the money and time to do things practically please do! Die hard fans of the genre are going to love you for it. This could have reached the heights of “Wrong Turn” with plenty more carnage and red stuff but still, If you want 85 minutes of silly fun go pick up a copy of The Bunnyman Massacre below.

My rating for “The Bunnyman Massacre” is 6/10