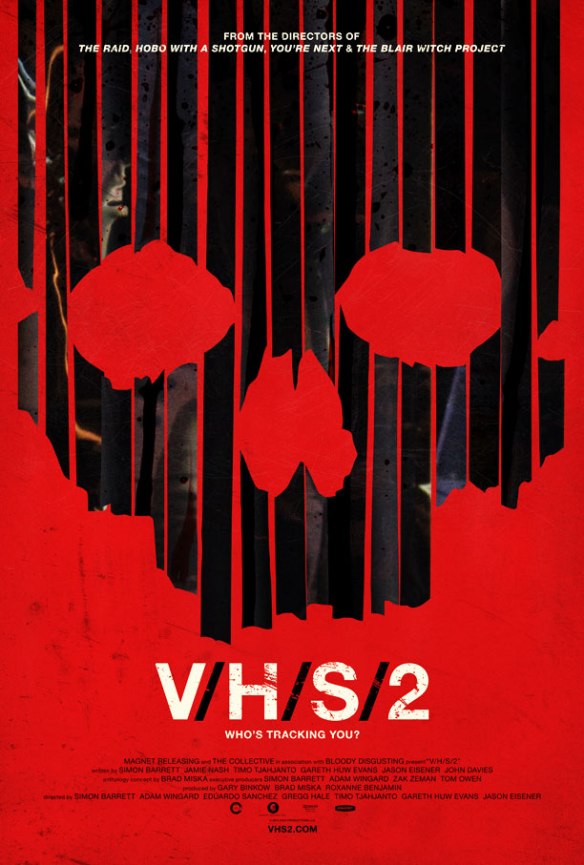 V/H/S/2  is the sequel to last years V/H/S, an anthology horror film that was made up of several segments. I thought the original film was quiet good but it lacked a bit of punch and was a little inconsistent. This time around 7 directors created a 5 segment follow-up to last years film. Adam Wingard (You’re Next), Simon Barrett, writer of (You’re Next, A Horrible Way To Die) and Jason Eisener (Hobo With A Shotgun), were 3 of the directors I recognised directing segments here. Because this is an anthology film I will discuss each of the stories and then give it an overall assessment. There is a big cast list and due to the amount of people appearing in the stories, I won’t make mention of all their names (check the Imdb page).

The first segment “Tape 49” is directed by Barrett as well as the segment that follows. Tape 49 introduces the audience to two private investigators. They have been asked to search for a missing student. They break into his house looking for clues to his whereabouts. They find a whole collection of video tapes which they begin to sift through with hopes of finding clues about his disappearance. They realise there may be a darker motive behind the investigation. The audio in this segment was a little hard to hear. Obviously it’s found footage so that can be an issue. However, I liked the way it was shot and I think it was a great improvement on the opening 10 minutes of the original film. It doesn’t offer much in the way of the story though, we basically watch the tapes with the characters and that is pretty much the film. 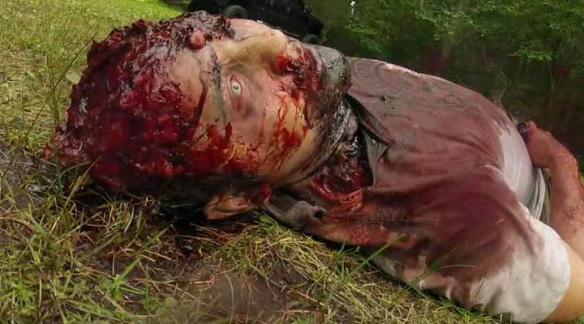 “Phase 1 Clinical Trials” is the second segment. It is directed by Adam Wingard and Simon Barrett. Herman (Wingard) has just had an artificial eye implanted in his head, I assume he has been blinded or lost his eye in an accident, it’s never divulged though. Shortly after the operation he starts to experience haunting visions and hallucinations of some very scary things. Wingard’s acting in this is really solid, considering he is more comfortable behind the camera. There is wonderful use of sound effects in this segment. We get intense and loud heartbeats and lots of bass in the audio mix that builds the suspense really well. I like that the camera we see through is actually his eye, that was a really unique experience. The things that he can see are pretty damn scary, I jumped a few times. It’s a good one to watch late at night!

“A Ride In The Park” is the next part of the film. It’s the inevitable zombie portion of the anthology. Jay Saunders plays a young guy who is supposed to be at home with his girlfriend but has instead, decided to go for a bike ride in the park. While riding he stops to help a girl who is coughing up blood. Before he can help her he is bitten on the neck, what follows is one of the best POV (point of view) zombie shorts I have ever seen. I don’t want to give anything away about this segment because it’s really good fun. The makeup, prosthetics and gore are all fantastic. The action sequences are lengthy which is exactly what you want when things start to get hectic, I loved it.

As was get half way through, the film changes drastically in its mood and tempo with the segment called “Safe Haven”. I was well aware I was watching a movie during this part but I say beware to anyone who is a bit “squeezy” they may want to give this one a miss. It’s incredibly realistic and you have to continually tell yourself that it’s not real. This was directed by Timo Tjahjanto. Safe Haven follows a reporter, his assistant and the camera crew. They have the job of interviewing a very disturbing middle-aged man. I’m still not sure of what his role is or what his “society” represented. I am going to say that he is the head of a cult of some sort. He believes sacrificing himself and all his disciples etc, will lead to glory (or something to that effect), any who he is one crazy bastard! This is just downright vicious and brutal. It’s a very intense segment that doesnt let up. It has some truly graphic images, obviously it’s not something that could ever happen but it’s very heavy. I wasn’t sure what to think about it at first but it’s so professionally done, I couldn’t help but enjoy it. The prosthetic and gore effects are among the best I have ever seen in a horror related film.

The final story is called “Slumber Party Alien Abduction”. This one really appealed to my inner kid, mainly because of the real fun 80’s vibe I got from the plot. It’s basically about a bunch of kids having a sleepover and the brothers of the main girl are pretty much being little buggers (haha). They play a prank on the girls boyfriend but before he can get any revenge the group are attacked by aliens. This had a real M Night Shyamalan (Sixth Sense, Signs) feel about it, the suspense was fantastic. Even though the acting felt a little forced it had some good humour in a few scenes, the aliens looked fantastic and it gave me a few real frights with the sound editing. It was a bit of a disappointment to see the poor little dog in the wrong place at the wrong time though.

V/H/S/2 really works as an anthology film. I feel that any one of these segments could be made into a full length feature at some point. It’s the first consistent horror anthology that I have seen. I’m impressed that the aspects that made the original a little dull were fixed with this sequel. Overall, I love every one of the stories, it’s suspenseful, gory and a lot of fun. The final segment (which I haven’t mentioned), had some great blood and gore effects but not a lot else. The story is the beginning of the film and the end it was also the weakest of the bunch. If you decide to give one anthology a go at some point in your life, make sure that it’s V/H/S 2. It’s a fantastic addition to these types of films and just to horror in general.