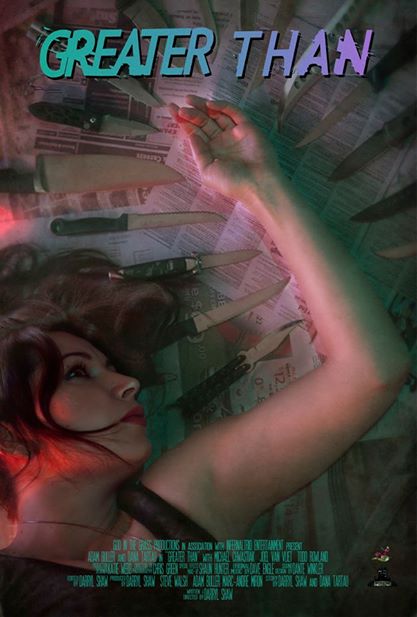 Firstly I just want to say thank you to Kyle Hytonen for putting a bunch of filmmakers onto me and my site. I recently reviewed Kyle’s short film “Massacre At Femur Creek” and he was kind enough to spread the word amongst his circle of friends, resulting in me getting the opportunity to review films like this one. “Greater Than”, is a 29 minute short horror film written and directed by Darryl Shaw, starring Adam Buller and Dana Tartau. The film is about a stubborn I.D forger named Ben, who falls for lovely, but emotionally damaged Lucy. Their relationship quickly develops, but Ben struggles to get his head around her warped idea of what true love is, What lengths will he go to in order to win her love?. The film also stars Michael Chwastiak and Joel Vliet. I just want to give a quick shout out to Darryl for contacting me about watching and reviewing his film, I really appreciate it!

The estimated budget for this well-written and disturbing horror short, was around $6,000, with which Darryl gets great production value from. The technical aspects are very impressive right from the outset. The editing is really sharp, a few fade to blacks were used, but most of the scenes flow into each other smoothly. The audio levels are pretty good, the camera work and shot choices are also quite creative. The aspect that stood out most was the way in which the actors faces were framed. It’s really well placed and nothing gets cut off in the frame. Some of the shades of red for the mood lighting in Lucy’s apartment looked great, it reminded me of David Lynch’s “Wild At Heart”. Lynch is one of my favorites, so that’s a huge compliment to Darryl.

There isn’t a lot of violence in this one, but what we do get to see was all done practically and looks very realistic, considering the small budget. The blood was a consistent color, and a couple of the plot twists had me cringing, that’s a true testament to how well they were done. I don’t want to say much about the plot and ruin it for those who plan on seeing it but haven’t done so yet. Let’s just say, it’s an interesting take on the human body and how certain people perceive the meaning of a “life” itself. One of the best things about Greater Than is the very Lynchian, “Wild At Heart/ Twin Peaks” noir style score. I absolutely loved it and it helped set the mood and tone of the entire piece. I have to make mention of Adam and Dana, the two leads in the film. When you take into account the experience levels of both these actors, you really have to admire the performances and the chemistry, great work!

As much as I enjoyed the slick film/noir soundtrack, there was a piece of music that sounded like something Jamiroquai would have recorded, and was on a loop which got rather irritating after a short time. Nearly the entire film has background music, there could have been a few moments throughout that were given some room to breath, maybe focused on the intensity of the relationship rather than conveying it through sound. A few lines of dialogue were rather average and didn’t progress the story. The sub-plot with the guys (mobsters?), that have employed Lucy to work in a factory sowing something or rather, didn’t really fit the rest of the story. The accents of the (Russians??) were a little shaky at times too.

Most of the content you’d expect is there, though I can’t help but think given what Ben comes to understand about Lucy, why he wouldn’t be weary of the fact that she’s maybe not all there in the head (haha)?. It seemed like he went from not wanting anything to do with her, to not being able to live without her and I figured things could only end in disaster. His reaction to the first, and rather major sign of how unhinged she really is, seems rather relaxed. I know if someone gave me that kind of present I would be horrified. Yet he seems more overwhelmed at how much she is showing she cares (haha, which I guess in a crazy way she does).

Greater Than was a genuine surprise. I knew next to nothing about the film, or what kind of filmmaker Darryl was. After watching this, I’m really keen to see what he does for a full length feature. This had shades of The Soska’s “American Mary” about it, which I dug. It’s technically really well made with some wonderful film/noir lighting and music. The action is sufficient enough given the content of the story. It’s got great pacing and I was happy that it ran a little longer than most short films. The writing could have been adjusted in places and the constant music toned back a notch, giving it a little more power, which would have resulted in a near perfect film. Great job none the less!! Below is a link to the films facebook page check it out.