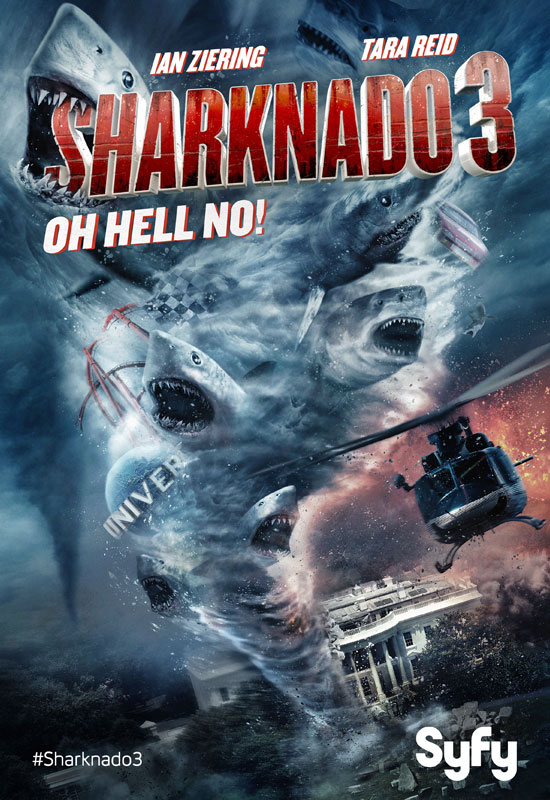 This week saw the highly anticipated (well, by those of us who love b-movies anyway), third installment in the “Sharknado” franchise, titled “Sharknado 3: Oh Hell No!” released worldwide on the Syfy channel. Director, Anthony C Ferrante really didn’t hit the scene until 2013, It was with the so bad it’s good b-movie Sharknado. It became the most watched Syfy film in the channels history, and it even received a limited theatrical run. Now that in of itself is pretty impressive, but when you combine it with the $1 million budget and the marketing campaign that followed, you can’t help but be impressed. The film was received with mostly negative reviews from critics, probably because the experts expecting something like “Jaws” and of course that was never the intention. B movies are supposed to be bad. No one forced anybody to watch the film, yet millions of people tweeted characters one liners, interacted with the cast and crew through social media, and played drinking games with their friends while watching Sharknado. It wasn’t just a handful of people either, this thing went viral fast. Then last year Ferrante got us excited all over again with Sharknado 2: The Second One, which promised bigger and better things than what we’d already seen, and in the worst way possible it more than delivered (haha). 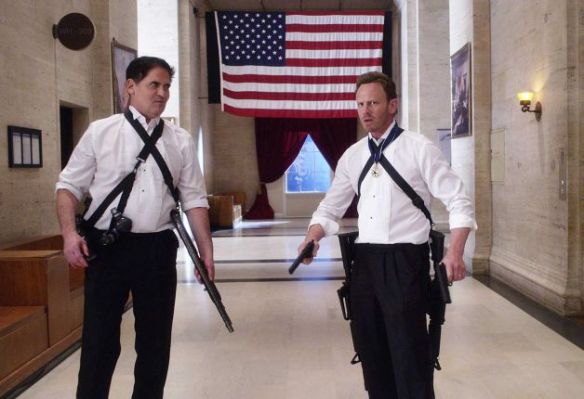 July 22nd 2015, Sharknado 3: Oh Hell No! aired on the Syfy network. The now iconic Fin Shepard (Ian Ziering), has earned the highest of awards, for services to his country regarding the Sharknados. Fin is at the White house, and in the middle of receiving his medal from the President when a Sharknado hits. Meanwhile, his wife April (played by Tara Reid) is at Universal studios in Florida celebrating with Claudia on her birthday (played by Ryan Newman). Fin realizes the urgency of the situation and happens upon his old friend Nova (Cassie Scerbo), who it turns out has tracked Nados with her friend Lucas (Frankie Muniz), and killed sharks since they were in LA. Fin decides to travel along the West Coast with Nova and Lucas, to try to get to April and Claudia. Sharknado’s are running rampant everywhere and Fin’s dad, Gilbert Shepard who used to work for NASA (played by David Hasselhoff), might be the only one who can help stop it. The film also stars Mark Cuban, Bo Derek and Jack Griffo.

Firstly, I like the fact Ferrante was able to keep the core cast together in this third chapter. It shows how big Sharknado has become, and how much fun everyone seems to have shooting these films. Ziering and Reid’s characters don’t seem like the most realistic of couples, but I like that throughout the series they’ve dealt with their fair share of drama and made it through the other side. Nova, played by Cassie Scerbo was one of my favorite characters in the original, and I was disappointed when she didn’t return for the sequel. I don’t know if Anthony had intentions of writing her back in or not, but clearly I wasn’t the only fan that wanted to see Nova again and I’m glad I got too. She’s a strong female character and she looks stunning to boot. Ryan Newman is new to the franchise as Claudia, it was Aubrey Peeples that played the role in the first. Ryan had a bit of cheek and played the part well, she also adds nicely to the eye candy, a beautiful girl indeed. The eye candy is always a plus but Sharknado has always been about our hero Fin. Ian takes the role quite seriously given the films ridiculous dialogue, and daft plot development. One might think it’s cheesy, which it is in a way but it also shows his commitment to doing the job properly even in a ludicrous film like this.

The introductory James Bond like sequence, that sees Shepard wielding his trusty chainsaw is a great way to kick things off. As is the animated drawings that go with the Sharknado theme song we all know and love. The action here gets started a lot earlier than the previous films, by throwing us out of the frying pan and into the fire. In my opinion it all happens a little too quickly though. Both the White House and Universal Studios make for more iconic locations the franchise can now lay claim to. Ferrante takes advantage of roller coasters, the Twister attraction and plenty of others. Sharknado 3 definitely has more blood and gore than the other two, most of which is unfortunately conceived with mediocre CG. We see plenty of bodies getting swallowed and chomped into bits though, and they look pretty good. On the other hand, opportunities to write a few more inventive kills and execute them practically weren’t taken. The highlight of the film for me was getting the chance to watch Frankie Muniz again. I was never a “Malcolm In The Middle” fan but I’ve always enjoyed Frankie’s films. He didn’t feature here as much as I would have liked, but the screen time he does get, (without spoiling anything), is memorable to say the least.

Up until now, technical aspects aren’t really something I’ve taken much issue with when it comes to the Sharknado franchise. I think you know what you’re going to see, and that’s part of the charm. We’ve all come to know what to expect from Sharknado or to be even more accurate, from anything the Syfy channel presents. I can deal with the poor visual effects component, the cheesy acting and even the predictable story lines. Surprisingly this time its the camera work that got to me. Most of the opening act’s, camera work was incredibly clunky or shaky when it didn’t need to be. Several pointless dutch angles (tilting the camera side on) were used for in-car shots, as well as poorly framed footage during some of the dialogue sequences. It all seemed very rushed, and it wouldn’t surprise me if I found out large portions of this weren’t story boarded beforehand. The editing is another problem. The first half of the film in particular never sticks with any one scene long enough to set up any development. One minute, April and her Mother are having a conversation about baby names, then suddenly Fin’s shooting up the White House and looking for an escape route. Seconds later Claudia is meeting up with a friend to go on a ride, while weather/news reporters fill us in on the Sharknado’s movements. Now I know people have short attention spans, but tone it back for a second or two and let the viewer catch their breath and find a reference point in this mess. 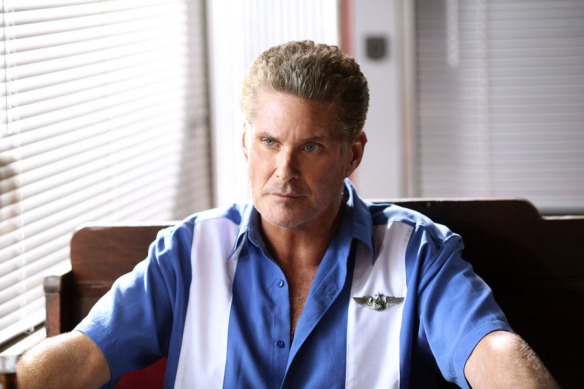 Some of the acting is inconsistent, this time mostly from the cast appearing in cameos. I didn’t recognize half the people who had a scene this time around, they can’t be that famous. The few they did put an emphasis on, made little to no impact because there weren’t enough one liners. The ways in which each of them met their demise lacked any real impact too. This is the first time those scenes and funny moments have been totally uneventful and could have just been cut. In fact ninety percent of the comedy they went for here missed the mark. Anthony is normally spot on with his self-aware brand of humor, but this screenplay was oddly serious… well to a point. Chris Jericho just annoyed me, the news ladies were painful and Mark McGrath who featured heavily in number two, only had one very small scene, what a waste. As you would expect, Sharknado 3 has plenty of continuity issues as well. The storm effects and the process in which they escalate are incredibly rushed. There’s no depth to any of the sequences, nothing builds and therefore there’s no room for escapism which should be one of the key components in a movie like this. Some of the shots clearly looked like they were haphazardly done with green screen, yet others looked alright. When buildings like the Washington monument, and other historic landmarks are falling there’s no clarity. You can’t comprehend a scale for anything and it all ends up looking like uninspired, cheap visual effects. 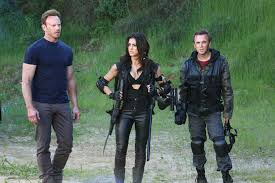 I can at least see some merit in things that were attempted practically on the first two films, but not here. I’ve always been a firm believer that anything you can do practically, you probably should. I understand this isn’t a hundred million dollar film though so some CG is going to be used. There’s an issue when with the exception of a messy escape scene at the end, barely any practical blood or gore gets used. In a creature feature film I think that’s inexcusable. You’re making a b-movie, embrace it. Get down and dirty, have some fun and use some creativity, I really felt that was lacking in this third installment. At least the first had a cool, giant indoor pool sequence (more or less), that actually used a big practical shark. What’s stopping Anthony and he’s team making a big replica shark, at least one? and killing a few characters off with it. I know they did in a way, but using it as a stationary prop just isn’t the same. I’m not saying you should use it for everything, otherwise things would look much the same but try to include it where you can. I longed for some prosthetic pieces, latex limbs anything. Corn syrup and food coloring would do it (this stuff isn’t expensive or hard to come by people). I don’t know what the masses were expecting, but an absurd 20 minute sequence in space to close out the film is not what I had in mind. Objects not tied down should be floating around with the zero gravity thing, but aren’t. The spacesuits look like something your parents homemade, sowing kit concocted for your Grade school re-enactment of the landing on the moon. Everything about that part of the movie was just idiotic. The only saving grace is that I guess it gave an unusually, serious Hoff and his character of Gilbert a purpose. He did a solid job, but I, much like everyone else was hoping for a few Baywatch puns, but alas. We could have seen another huge and disgusting finish, but instead we get the door left ajar for a fourth film in the franchise. 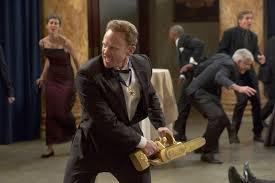 Sharknado 3: Oh Hell No! is unfortunately just beating a dead horse, you may be thinking wait I didn’t see any horses don’t worry they were metaphorical, but not completely implausible. Horsenado could be the next mash-up. On a serious note, It’s great seeing the band back together but they came out with a less than stellar new album, and all we really wanted to hear were the classics. There’s one or two decent cameos, the girls look lovely and Fin continues to display mad skills with his chainsaw. It’s disappointing that the camera work made for such a difficult watch, the effects lacked scale/depth reference and there were continuity issues through what was an incredibly, out of left field final act. When you don’t even have a go at trying anything practical, or taking that five-minute drive to your local Costco for some syrup and food coloring, you start to lose my respect. It’s not always the case, but that saying two’s company and three’s a crowd, this time around I think they might be right because Sharknado might have just lost its charm.