I recently reviewed a short, of director Alfredo Salvatore Arcilesi called “For Clearer Skies” (https://adamthemoviegod.com/for-clearer-skies-review/). Today I’m reviewing his full length feature “Canswer”. A Drama/Mystery film that was dedicated to the memory of Alfredo’s father, who recently passed away. Firstly, I would like to offer my condolences to him and his family, and secondly thank him for sending me a screener of the film to review. Canswer is a film shot in one location, with minimal characters and made for just $10,000. It’s a story about Ellen (Sarah Cunningham), a young mechanic who is stuck on the roof of her workshop during a global pandemic. She spots a man named Cillian (Robert Nolan), who is screaming for help, she ends up rescuing him and helping him up a ladder to the safety of the rooftop. There, the two must battle starvation, dehydration and each other. The film also stars Kelly-Marie Murtha and John Migliore.

The film opens with an interesting choice of dialogue over the top of the credits, which I thought was really different. Nothing overly important is being conveyed, but it’s basically the first interaction that Ellen and Cillian have with each other. It’s made even more impressive by the inverted camera shot, that slowly flips itself as Cillian finds his way onto the roof. It’s a really unique way to start the film. I respect the films attention to detail with the predicament our two protagonists find themselves in. No one makes any rash decisions, an act exactly how you would in a real life situation. The visual shots we get to see of the zombies are pretty good, and it feels realistic because of the use of lots of extras to fill those roles. The film’s potential for success, relies heavily on the performances from Sarah and Robert, and for the most part both are very good. I found a few inconsistencies in their acting during some passages of dialogue, and when frustration sets in Robert doesn’t quite hit the mark either.

I was disappointed that big portions of the film had no score, which definitely could have aided in setting the mood. However, there’s a lovely piano score that is heard a few times throughout the film, which I really liked. My favorite part of the film was the end, but in the same sense it was also kind of the most disappointing part. The revelation is a genuine surprise, albeit coming from a little out of left field. There are also some beautiful arresting visuals in the final act that really help bring it to life. It’s a technique that I saw a glimmer of in Arcilesi’s “For Clearer Skies”, and we get a little bit more of it here.

I’m going to do my best to be respectful, as I delve into the issues that I found with the film. Because I know this was probably a passion project for Alfredo, and it is dedicated to his father and I want to respect that. When you write a screenplay with only two characters and entirely set it in one location, you limit both visually and creatively what you can do. Brilliant films like “Sleuth”, “Tape” and even the indie home invasion flick “Home Sweet Home”, were exceptions to the rule simply because of fantastic casting, a certain palpable tension and most importantly, incredibly well written and multi layered characters. It’s not a task I would have taken on, but more power to Alfredo for backing his ability. Within the first 10-15 minutes, I was taken straight out of the film with the shooting style and camera work. Immediately, I noticed the color grading was purposely washed out. When I compare the shots from pictures on location to the end result, I can’t help but feel it would have been better to have kept this in its natural form. 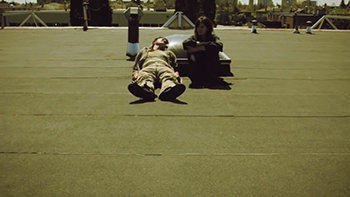 The camera is often moving ever so slightly vertically. I’m not sure if that was a particular technique, or they just couldn’t keep it still, but it makes it very difficult to focus on anything else. During one scene, Cillian is walking on the lower part of the balcony and the camera is on the higher part, looking at him from an angle. The shot follows him for at least 90 seconds but it’s basically pointless. He doesn’t go anywhere and he doesn’t say anything. The most noticeable issue with the camera, was the rounded sweeping handheld shots. They were clearly done on purpose, but as a viewer they make for a horrible watch. As Ellen and Cillian sit back to back with a pole and box between them, the camera roughly sweeps around them continuously in a circle, as they talk. I’m sure some solid dialogue takes place while this is going on, but don’t ask me what either of them said because I wouldn’t know. I couldn’t think of anything else, but this wildly moving camera. It stood out so much because Alfredo’s camera work in For Clearer Skies, was so smooth and I much prefer that style. By the same token, I found the audio levels very inconsistent, although that could just be my PC speakers, I’m not sure.

Not a lot of the dialogue is overly interesting, or helpful in the development of these two characters, so the screenplay probably could have benefited from a few flashbacks. I tend to complain when flashbacks are used and not needed (haha), this time it’s the opposite. I can’t help thinking we would have had the chance to understand and like these characters a lot more. Ellen’s development wasn’t as important (depending on how you look at it), but Cillian was crucial to the entire story. I kept drawing the comparison between the location setting here, and that of Zack Snyder’s 2004, “Dawn Of The Dead”. An entire section of the aforementioned is set on a building rooftop just like this. Maybe Alfredo hasn’t seen the film and doesn’t know this, but he was either drawing directly, or indirectly from one of my favorite horror films. I’m not quite sure about the decision to even make this post apocalyptic world a zombie one. After all, it has been done to death and in the end I’m not sure that it fits all that well with the context of the narrative.

After really enjoying For Clearer Skies, I had high expectations for Canswer, but was left feeling pretty disappointed. It’s an ambitious effort with a small cast and a one set location, but ultimately probably would have been best left alone. It’s very difficult to succeed with a slow-burn drama at the best of times. But when it lacks engaging dialogue and nowhere to run, it’s a long way back. The first half of the film fails to generate much momentum, and the blow is only slightly softened with an offbeat, but cool twist ending. Just because this one wasn’t for me, doesn’t mean others won’t enjoy it. I’m sure Alfredo is happy with the end result, and from a personal point of view if he made what he set out too, you can’t ask for much more. Thanks again for the opportunity to watch this, and I hope to see more of your future projects.