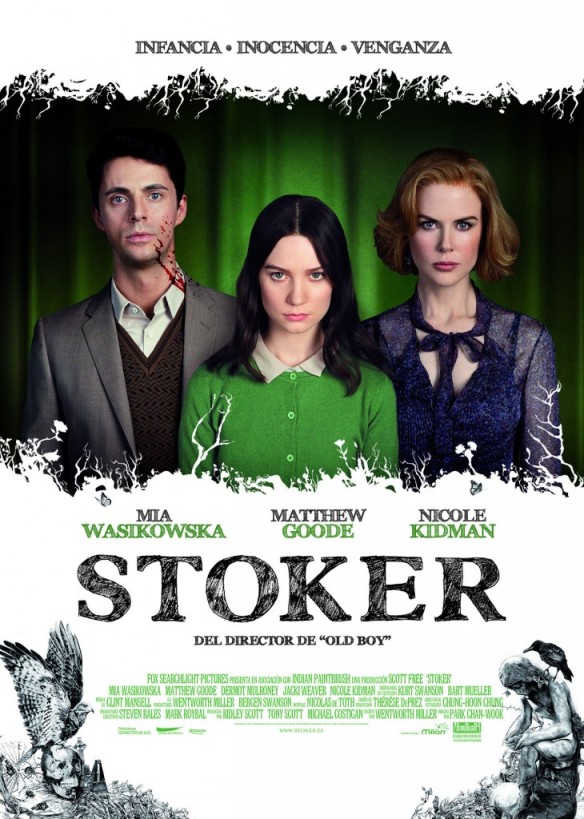 Chan-wook Park, director of “Old Boy” takes on his first American film called “Stoker”. The script was written by Wentworth Miller (star of the tv series Prison Break). I have heard many fantastic thing’s about Old Boy and Park’s directing style. I’m looking forward to eventually watching the aforementioned. Stoker is about a young woman named “India”, played by the young actress Mia Wasikowska (Alice in Wonderland, Lawless). After her father passes away, Her uncle Charlie (Matthew Goode), who India never knew about comes to live with her and her mother Evelyn, played by Nicole Kidman. Over time India becomes suspicious with the mystery surrounding Charlie and what his ulterior motives might be for coming into India’s life.

The film has a really solid cast, sadly we don’t see the potential of Nicole or Mia’s acting ability due to the writing of their respective characters. Matthew Goode does a solid job as Charlie, he seems a little vacant at times but that’s probably due to the mystery of the character. Chan has created some fantastic sound effects here. Throughout the course of the film we get indistinct dialogue at times as well as the sound of a metronome and classical opera on the radio. Combine this with the great use of natural light and shadows in certain shots and you get a very atmospheric film. However, this feeling evaporates as quickly as it begins. 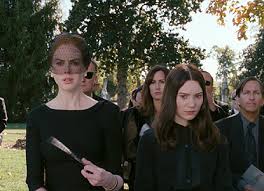 The structure of the scenes is incredibly poorly executed. It’s thrown together without any continuity or separation of events. The narration in the beginning is something meant to be profound and artistic but comes off as simply trait. A girl who is that young hasn’t had the life experience to understand her place in the world yet. People commend the camera work, which I thought was horrible. The steady-cam shots were anything but steady. Single frame shots were even shaky. Slow motion is used several times during the film, not for any real purpose other than to add to the “artistic” aesthetic look of things. The score is completely generic, a mix between something you would hear in a Michael Haneke (Cache) or Steven Soderbergh (Side Effects) film. It was also labelled a “slow burn” film, its honestly that slow that I felt it actually stop moving at some point. This matter is made even worse by its painfully predictable second and third acts that you could see coming ten minutes into the film. 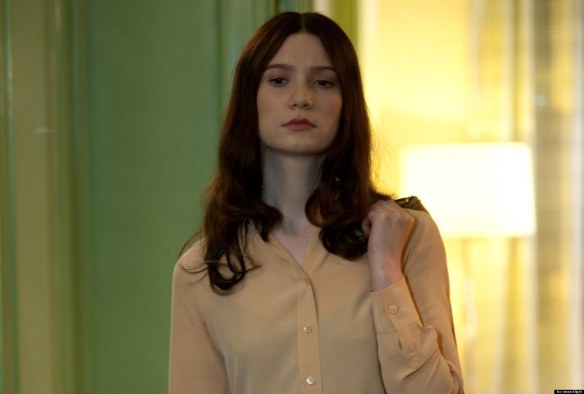 The most frustrating aspect about the entire thing is the lack in realistic and obvious questions one would have. Questions are never asked by any of the characters and therefore answers are never given. India doesn’t know she ever had an uncle. I can handle that, even with the flashbacks showing her and her father were close. I can understand if he was ashamed of his brother that’s realistic. However, when Uncle Charlie arrives at the family home surely India would question her mother about who he is? Something like “Did you know about him?” or “What happened? Why didn’t dad ever tell me about him because we were close?”, she never even asks a single question and It doesn’t end there.

After a conversation with Charlie, the head maid of the household disappears indefinitely.  You’d think someone would mention the maid at some point wouldn’t you? At one point Evelyn (Kidman) says something about the maid because she herself has no experience in cooking, then they just pretend the maid never existed, it’s laughably bad. Not a single aspect of anything to do with the characters in this film is ever questioned or answered. It makes it impossible to watch or to have the possibility of connecting to any of these characters. Once India finds out the unbelievably obvious nature of Uncle Charlie she then has sexual fantasies about the people he has killed while pleasuring herself, that makes sense.. yeah right. I don’t find any artistic merit in seeing something like that, I just think it’s sick and not a positive thing to be depicting in a film. I know the young girl is a little strange right from the beginning due to her father passing away but her sudden change is without warning. Sadly, her ability to not question a single thing and then think “oh it’s okay, he’s just killing people, it’s completely normal” is just utter garbage. 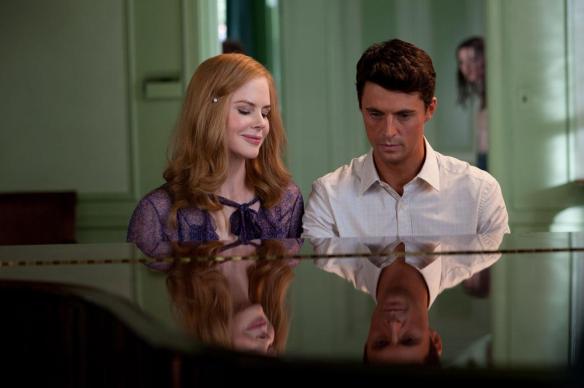 This is pretty poorly acted, incredibly slow and overly arty and for the sake of what? It accomplishes nothing. I still can’t get over how underwhelming this film really was, I’ve never been so disappointed. It felt like a terrible cross between “The Talented Mr Ripley” and whatever Lars Von Trier (Antichrist) is passing off as art these days. I can’t get over the glowing reviews this film has received. Honestly, I don’t say this to often but don’t waste your time it’s 100 minutes you will never get back again.