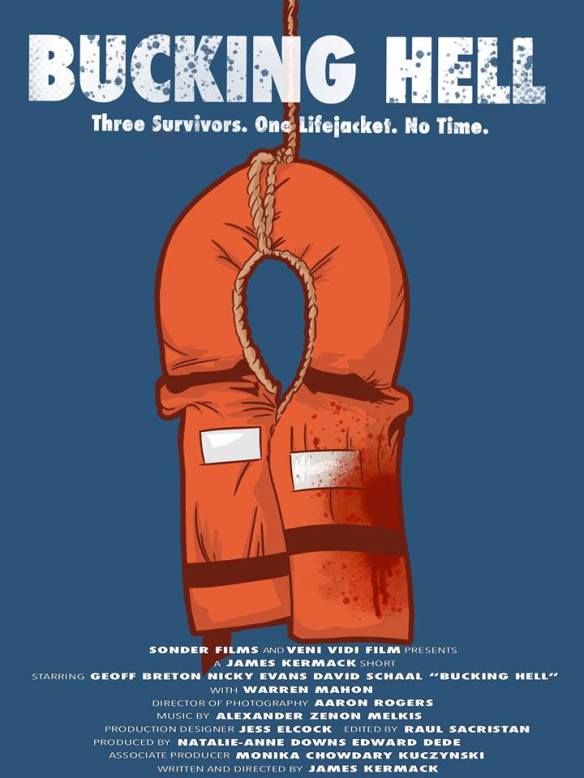 Firstly, I’d just like to say thank you to Actor turned Writer/Director, James Kermack for allowing me early access to an online screener of his 16 minute, Darkly Comedic/Thriller  “Bucking Hell”. Bucking Hell is an oceanic themed short that takes place on a slowly sinking ship, where three men from different walks of life are amidst an unconventional game of Buckaroo in order to decide who gets the remaining life jacket, and in turn, salvation. The film stars David Schaal (TV’s “The Inbetweeners”), Nicky Evans (TV’s “Shameless”), Geoff Breton and Warren Mahon. 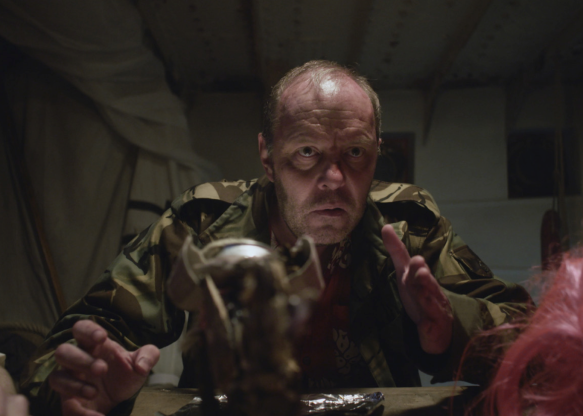 I have to give Bucking Hell points for originality, because it’s not often you see independent films set on the high seas. A venture like that usually takes money and a lot of know-how, two things most low-budget films don’t have (even in the case of Bucking Hell where the ocean is only inferred). The initial credit sequence is really effective, with the listings appearing on different parts of the ship an in tandem with Kermack’s opening establishing shots. The audio levels are bright and consistent, and the sound department did a wonderful job of the foley. The creaking of the ship, the pounding of the rough seas and the sounds of the game are all well mixed. DP, Aaron Rogers draws on a lot of clever two-shots and atmospheric lighting, as well as a series of quick cuts that play nicely to Raul Sacristan’s edit. I read in the press kit that Bucking Hell was heavily inspired by Spielberg’s infamous 1975 film, “Jaws”, and it shows. In particular, Quint’s iconic shark story in comparison with Myers tale. The high production value of Bucking Hell is evident through a number of aspects, most notably the set design and the impressive performances. First time composer, Alexander Melkis created a wonderful “Black Sails” esq score, that consists of a lot of violin and what sounded like french horn, definitely gauging that buccaneer vibe. The three characters are very different from one another but each of them as interesting as the next. Self proclaimed host of the game an Ex military man, Myers (Schaal) sounds like the “cockney” of the bunch, providing some good comedic relief throughout. Nada (Evans) is an intriguing one. The middle man, the cautious type. Lastly, theres Burton (Breton), whose a sort of Hugh Jackman’s “Robert Angier” (The Prestige) cross with Johnny Depp’s iconic character, “Captain Jack Sparrow”. The guy’s a bit of a nervous wreck, void of a backbone but also quite funny. The dynamic of the three is certainly something to be seen and each of the performances are strong. 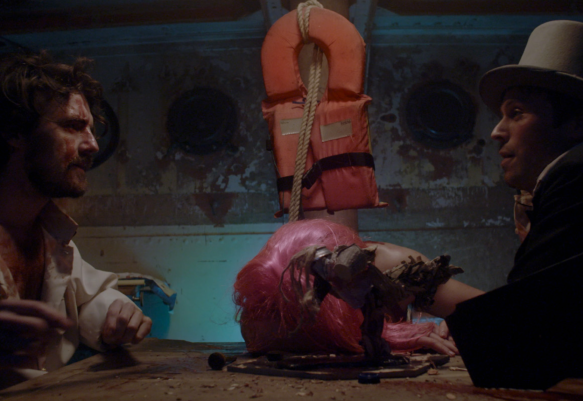 From a technical point of view I only noticed one minor momentary lapse in focus. Another downside was that I couldn’t quite hear Evans last line, I had to backtrack a couple of times to catch it. The film could be described as more equal parts comedy and drama than it is an actual thriller, so that may mislead people somewhat. There’s plenty of humour on display in each of the performances but I think Kermack missed an opportunity for one of the characters to interject with a “god how long is this going to go on for” type of gag during Burton’s long-winded speech, especially considering where it ultimately led (haha). One may also question why there’s only one life jacket on the boat (I believe we’re told everybody else had abandoned ship) but surely from a safety point of view there’d have been a few more. In addition, how did these characters come to be on the same ship, given it looks like a fisherman’s hull and not commercial transport? None of them are dressed like commercial fisherman, so I’m not sure. 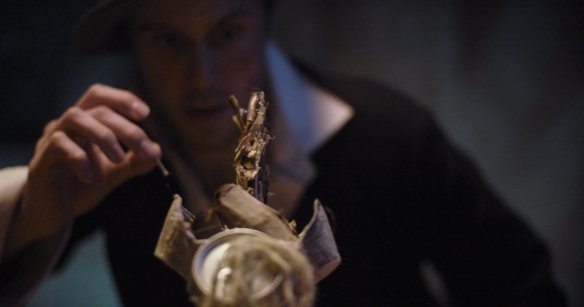 Bucking Hell is a great little independent short film from a talented group of people. Other than Andrew Hamer’s, “Three Skeleton Key” *see review* https://adamthemoviegod.com/three-skeleton-key-review/ I don’t think I’ve seen anything remotely set in the  world of Kermack’s premise. I like the poster art, the cool credit sequence and the thought process behind James’s inspiration. The sound is lively and the cinematography drives the high production value, that and I was most impressed with Melkis’s score. The characters are interesting and engaging, so to the performances. There were only one or two small issues and I think a couple of the plot points could have been altered to underline a bit more comedy. Bucking Hell is definitely up there with some of the best shorts of 2017, so keep an eye out for this one soon! You can check out the teaser trailer at the link below! The film is now available for viewing on VOD (video on demand) at the links below.