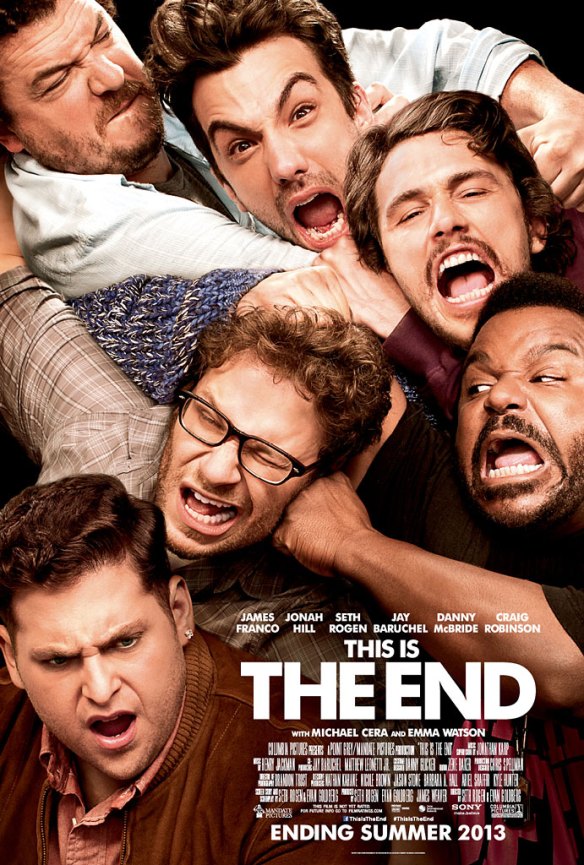 THIS IS THE END

Written by Evan Goldberg and Seth Rogan “This Is The End” is a comedy about the apocalypse, The Biblical end of days. A group of “celebrities” including the likes of Jay Baruchel, Seth Rogan, Jonah Hill, Craig Robinson and Danny McBride attend a party at James Franco’s house. During the party destruction reigns down upon the earth. The remainder of the film is the group trying to survive in James Franco’s house with the supplies they have left, yes that’s it.

That is the basic story (if you want to call it that). At the beginning of the movie, Jay has come back to LA to visit Seth Rogan to catch up on old times. Seth invites Jay to James house for the party, against Jay’s better judgement he says okay. While they are out getting supplies the apocalypse starts and they have to make it back to James house. There are a bunch of little cameo’s in the film from Michael Cera, Jason Segal, Nick Swarsdon and many more.

There were a few decent and clever lines of comedy in the film but they were few and far between. The milky bar skit was enjoyable. Also when the wormhole opens up outside the house and people are falling in the hole. I found Craig Robinson and Jonah Hill to be the two funniest in the film. I read somewhere the actors wrote most of their own lines, I question how funny are these actors then? I like Seth Rogan but for him to write such utter garbage like the dialogue that is dribbled in this film, I begin to doubt his writing ability. Danny McBride is terrible in the film, very unlikable and excessively crass. If this is really Danny, I’m not impressed. James was okay, then again he doesn’t come from a comedic background so I didn’t have the same expectations. Moreover, the best comedic actors like Jason Segal and Paul Rudd weren’t utilized anywhere near enough. They just had small cameos for a cheap laugh. 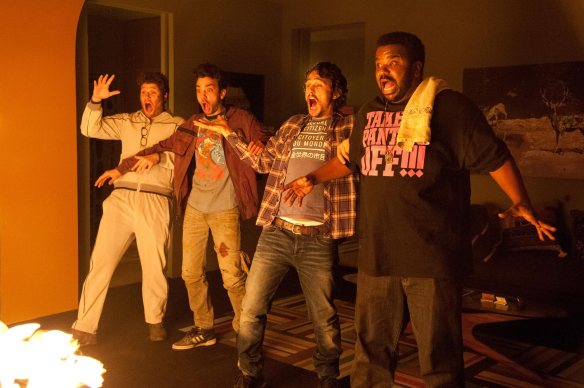 The music throughout the film wasn’t bad, the little addition of one of the most well-known groups of the 90’s performing a hit single was entertaining. I think one thing that was clever about the script was the actors actually playing themselves. They had the opportunity to say what they wanted about each others previous films etc. That much was original. The monsters/demons whatever you wish to call them were part of the Apocalypse and they were good. I thought they looked impressive (the fake penises were funny) and some of the action sequences weren’t too bad either. The gore based effects were the best thing about the film. I thought they would be very slapstick and look funny. They were funny in away but at the same time they were graphic, lots of blood.

However, the negative aspects far out weigh the positives. This contains barely enough story to even make a movie. Films with people doing various drugs and acting half their age just aren’t funny. Personally, I don’t think they have ever been funny maybe I’m just to mature for that childish humour. The jokes that start out funny in this film are taken so far out of context and to a ridiculous extent that they lose any merit. Constant masturbation and penis reference jokes, f-bombs dropped every 10 seconds just for the sake of it. If you’re relying on these cheap and nasty gags to be funny then maybe your just not witty enough to write a decent comedy. Someone forgot to tell Seth Rogan that making light of a serious subject matter like rape, isn’t funny. It’s never going to be funny and even for a male viewer you’re pushing your limits.

There is very little to like about this. I have lost a bit of respect for all that were involved in this. James needs to stick to serious films. Seth needs to think about his ideas and execute them a lot better. Danny McBride has done his dash with me, I won’t watch anything else that he appears in. The most important thing I learnt from “This Is The End” is that when you cross Exorcisms, Apocalypses and a House Party, your end result is failure. This one’s a spud guys..