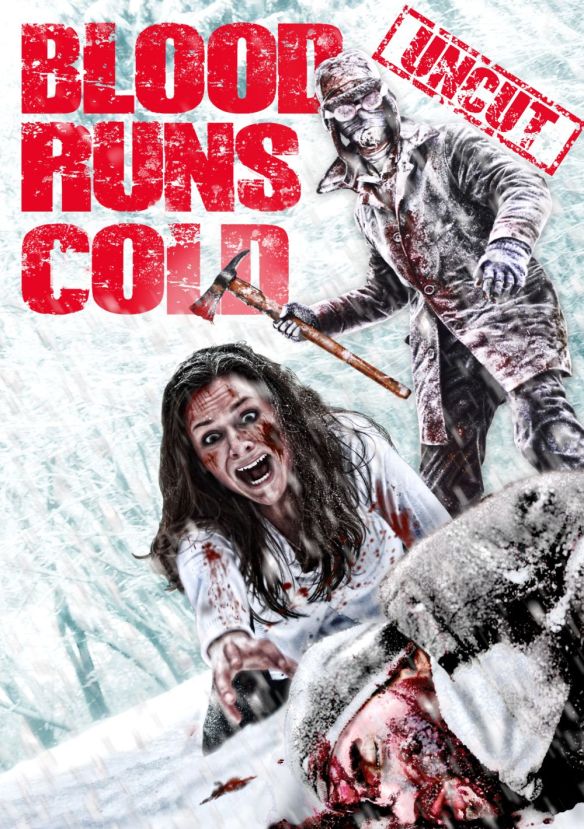 Blood Runs Cold is an independent Swedish horror film from first time director Sonny Laguna. The film’s audio is entirely in English but the cast are made up of indie European actors and actresses. It stars Hanna Oldenburg, Elin Hugoson, Andreas Rylander and Ralf Beck. Winona (Oldenburg), is a successful writer who is too stressed out and needs time away from her writing. She heads out to a cabin in the woods which is on loan to her by her publisher. After a chance encounter with an ex-boyfriend and his friends, a quiet weekend away turns into a nightmare when the group discover they aren’t alone in the cabin.

First off, the film’s poster and artwork really caught my eye and that was part of the reason why I bought the film. I hadn’t heard of newcomer Sonny Laguna and after many negative reviews and judgements of this flick, I thought I better just see it for myself. It’s a pretty stock standard take on the slasher in the woods genre. There definitely isn’t anything new here that you wouldn’t have seen in every other slasher film over the last 30 years. However, I can safely say that for a micro budget of just $5,000 Blood Runs Cold will make a permanent mark on the success of low-budget horror films. 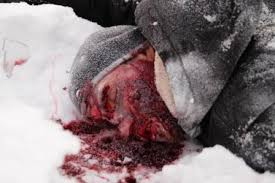 I love the fact that this is filmed entirely in Sweden and with European actors. I think it would have worked even better as a foreign horror film though, without the English dialogue. Sonny probably tried to Americanize it so he could relate more with the Hollywood scene. Let’s face it though, Hollywood has never supported low-budget filmmaking so I wouldn’t have bothered with it. It’s a beautiful snow-covered landscape that the film is shot in and no CGI was used in backgrounds or the snow itself. I was really impressed by the crisp steady cam shots and overall smooth camera work. I liked the light piece of music that’s used in the very first montage of scenes and of course it’s great when the audio and sound effects really pick up as the film builds its suspense. I watched part of the making-of documentary and gained some insight into what the crew was up against trying to light this film. Dealing with freezing temperatures, in the winter, in a forest in Sweden! Let me tell you, they did a great job. A lot of the shots inside were filmed using flood lights and building lights.

Moreover, the action sequences were very impressive too. The beginning of the story relies on a little bit of fluff character background and development but once the action arrives its brutal and bloody good fun! Some great kill sequences involving an axe, the mystery man’s main weapon. The blood and practical effects look superb too. I couldn’t spot the digital effects that were added and tweaked in post production either, it was a very smooth blend.

As far as the bad goes, there isn’t a lot too say. I suppose the way Winona stumbles across her ex-boyfriend and his friends is a little farfetched. We are lead to believe it’s a small town with only one bar and maybe a main street. She hasn’t been back to this location in years yet she happens to run into her old flame and co. The acting is not bad for the most part but some of the characters reactions were a little unbelievable and unconvincing. In one scene Winona stumbles across the body and shows very little shock or fear, and considering the body didn’t have a head…(haha), that was kind of weak. 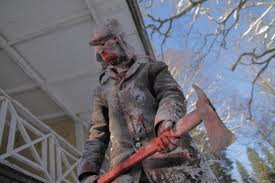 Things concerning our mysterious bandaged and masked killer go mostly undiscovered or underdeveloped. Personally, I didn’t think it was a big deal, those of us who watch a lot of slashers know exactly what to expect and nine times out of ten that’s all we get. You don’t know anything about this guy, who he is, where he comes from or his motives for hunting the group down. Things become a little muddled in the last act of the film. Particularly after he is hit with an axe and the wound doesn’t appear to bleed at all, or even show a gash in the aftermath of the scenes that follow, that was a little hard to swallow. When he gets hit it’s almost like trying to break a cube of ice, he has somewhat of a hard coating (haha). It seems like he can’t be killed which of course is silly, because we know most villains in slashers can and eventually will be killed!

It’s small issues aside, I loved every bit of Blood Runs Cold. It’s technical aspects far surpass anything that I have seen in the horror/slasher genre in a very long time. The entertainment factor and the cliché’s you hope to see in a standard slasher flick are evident. It has a fairly flat and abrupt ending that most people wouldn’t expect, but the fast pace nature of today’s slashers can get away with that. I say it again, BRC was made for a measly $5,000! the result, technical professionalism, solid suspense and some great action sequences (including one of the best decapitation scenes I have ever seen! the gorehounds will love it). It’s production value alone is enough to watch for a how to guide and deserves plenty of recognition. I think that Blood Runs Cold is the best $5,000 slasher film you or I will ever see! Be sure to pick up a copy! I can’t wait to check out Sonny’s latest film “Wither”