The Oscar-winning yet still undervalued, Francis McCormand (Fargo) makes a long-awaited return to the spotlight in Martin McDonagh’s latest Crime/Drama film, “Three Billboards Outside Ebbing, Missouri”. Three Billboards is about exactly that, three billboards that reside on a road less travelled that leads into the small town of Ebbing (but that’s just the first piece of the puzzle). Mildred Hayes (a disheveled looking McCormand), a grieving mother in the process of dealing with the rape and murder of her teenage daughter, has finally had enough of the inept local police department and decides to publicly display her contempt for the authorities via controversial messages placed on three billboards. Well respected chief of police, Bill Willoughby (played by Woody Harrelson) suddenly feels the pinch to act, and with dim-witted, bigot, Officer Dixon (Sam Rockwell) as second in command, Mildred finds herself in a personal battle to find her own brand of justice. The film also stars Caleb Landry Jones (Get Out), Lucas Hedges (Manchester By The Sea), Abbie Cornish (Seven Psychopaths), John Hawkes (Small Town Crime) and Peter Dinklage (of HBO’s “Game Of Thrones”).

I’ve been a fan of McDonagh’s witty writing ever since his 08′ feature length debut “In Bruges”, a Crime/Comedy about two hitmen with extremely different personalities, thus making for a darkly funny film with a surprising amount of heart. Martin’s follow-up in “Seven Psychopaths” (which saw Harrelson and Rockwell working with each other for the first time), again took on a similar life, a violent foundation that introduced a multitude of colorful characters, cleverly doing so in a film that’s ultimately about storytelling and the creative process itself. Being two for two in my mind, I’ve been eagerly awaiting the release of McDonagh’s latest, another Crime/Drama with elements of dark comedy which also sees a number of his regular players return. DP, Ben Davis keeps the cinematography fairly simple, doing the material a service given that it’s mostly a character piece. The entire color palette looking rather dreary, in turn fitting McDonagh’s intended tone. The Coen brothers composer, Carter Burwell is perhaps one of my favourite artists. He’s responsible for some of the most memorable scores over the last 30 years (most of which were in Coen films). I had my suspicions it was Burwell’s western style notes behind Three Billboards, especially when you hear the opening orchestral theme and that piano flavored flair reminiscent of films like “True Grit” and “Miller’s Crossing”. Little did I know that it was him until the end credits. Three Billboards projects an interesting contrast, developing with its slow burn pacing, yet at the same time, relying on quick fire delivery. At almost two hours and with very little on-screen violence, the film takes its time establishing the true depth of disconnect between Mildred and those around her, namely law enforcement. I have to say that the plodding development clashes a little with Martin’s dialogue delivery for most of the duration, especially with McCormand’s character rattling off most of her sassy remarks so swiftly.

Sizeable blocks of the writing are quite entertaining and even darkly funny on occasion, a cornerstone of McDonagh’s writing. If you like the say it how it is approach and a pull no punches attitude, Mildred is certainly a character you’ll be able to invest in. She’s your everyday woman dealing with a broken family, financial burdens, and if that weren’t enough, a loss of great magnitude with little or no hope to go on in regards to finding some much-needed clarity. The film has its light-hearted moments too. My favourite line comes from Mildred as she unexpectedly walks into her kitchen to find a priest, it goes something along the lines of, “I think that midget wants to get in my pants”… “Oh, Hello father” (haha). The cast are all consummate professionals and deliver consistent performances across the board. While, McCormand doesn’t quite reach the heights she did with her character work of the infamously chipper “Margie Gunderson” in Fargo, she turns in a resolute and honest performance just the same. Harrelson has quickly become one of Hollywood’s most reliable and diverse actors, I loved seeing something different with his character arc here. Secondary parts like Landry Jones’s “Red Welby”, the local advertising manager, and Dinklage’s slightly desperate townie “James”, make for great additions as well. In addition, actors with bit parts make their screen time count to boot, such as the underrated John Hawkes, playing Mildred’s ex-husband, and Abbie Cornish playing Bill’s wife. Even Martin’s go to for comedic relief, Zeljko Ivanek as a desk sergeant shares some good scenes with Harrelson and Rockwell. Speaking of Sam, I’ve had huge wraps on him for a long time and he steals the show in Three Billboards with his portrayal of Dixon. I’m glad he’s finally getting some recognition especially with the nuances in this performance. The character is a multi-faceted one and easily the most interesting part of Three Billboards Outside Ebbing, Missouri.

Given the somewhat hindered pacing I think the film could’ve been cut by ten minutes and it wouldn’t have lost anything. For example, a seemingly nothing scene where Willoughby explains the rules of fishing to his daughters in order to get some alone time with wife, Anne. In hindsight, the scene does have relevance given what transpires, but it could’ve been something referenced through dialogue or narration and it would’ve been just as meaningful. If you’re looking for authenticity in accents you won’t find it in Three Billboards, excluding Rockwell’s take on a southern drawl (which is quite good) nobody else bothers. Cornish’s acting is solid but the decision to keep her original Australian accent proves to be a misstep, as she comes off sounding somewhere in between American and English, noticeable in her gift shop scene with Francis. McDonagh’s films are known for their excessive profanity, usually in the name of comedy, and to Martin’s credit it often works. Though on the odd occasion it does fail to land, most notably in a scene in Three Billboards where Mildred’s son “Robbie” (played by Hedges, in much the same manner he played his character in the previously mentioned “Manchester By The Sea”) who I’m not sure ever really found his place in the film, proceeds to call his mother an “old c*n*”. It didn’t come off as humorous though, just crass and not how any self-respecting young man would talk to his mother. If I’m watching Gary Oldman’s “Nil By Mouth” where domestic violence and drug abuse are present then I’d expect something like that but not from a film of this nature, even in spite of Hayes rough around the edges demeanour. In life, we often end heated interactions with people negatively, which is something you shouldn’t do (the reasons for that are shown in the film), though I did find it hard to believe that Mildred would wish such things upon her daughter with such an over reaction. The one thing holding Three Billboards Outside Ebbing, Missouri back somewhat, is that for every poignant moment McDonagh evokes from his cast and their respective characters, he often immediately undercuts with an off-beat line or an inappropriate quip attempting to be passed off as meaningful. One example is Mildred’s spontaneous emotional outpour to a terrible looking CG deer… what was with that? 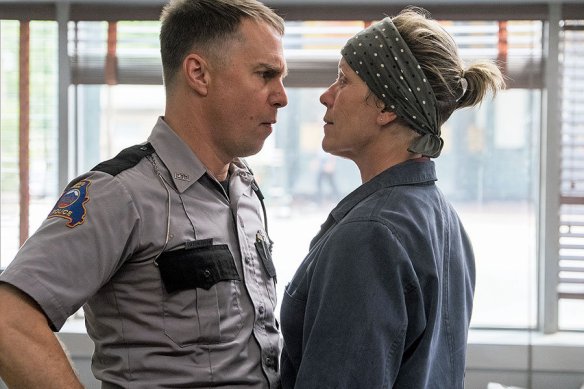 I’ve been following the progression of Three Billboards ever since first hearing about it well over twelve months ago. A year is a long time to build anticipation and after all the oscar hype, I had high hopes. It’s a competently shot film, beautifully scored and well acted right across the board. McDonagh’s writing has been consistently good over the course of his relatively short career, and he shows signs of that quality in parts of Three Billboards. Mildred is an interesting character to say the least, and she ends up in a number of humorous dealings with different people in the town. However, my favourite scenes in the film mostly involve Sam Rockwell. Dixon’s unapologetically funny, energetic and certainly rash. Sam’s wonderful depiction of a character that comes full circle over the course of the film makes this one satisfying and well worth your time. The pacing suffers a little at times, some of the profanity feels forced and the local accents are nowhere to be found. Not all of the reactionary stuff seems entirely plausible either and Martin undoes some of his good work by clashing space, therefore the film never quite feels as emotionally weighty as the material suggests it should. Three Billboards Outside Ebbing, Missouri is a good character piece, sadly it’s just not a great one. The film is currently showing in theatres and you can watch the trailer below!

My rating for “Three Billboards Outside Ebbing, Missouri” is 6.5/10