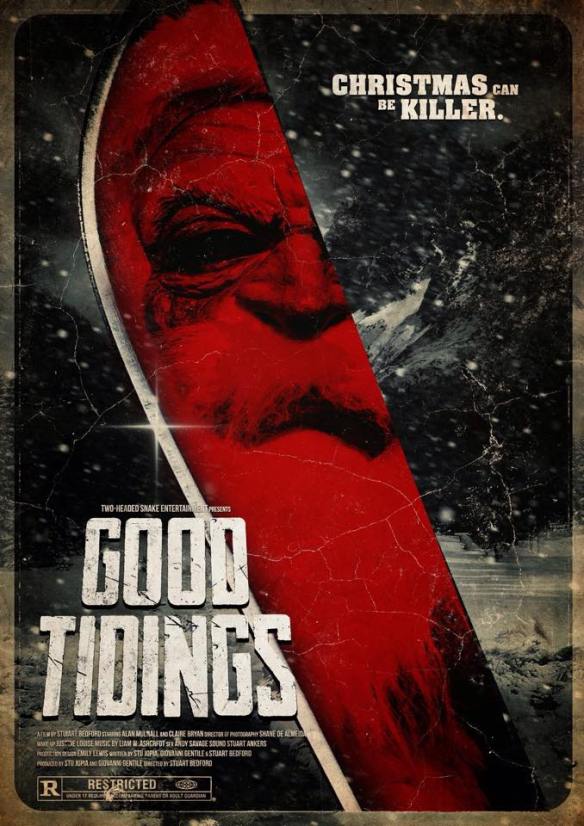 Firstly I’d just like to say thanks to both Director, Stuart Bedford and Co-Writer/Actor, Stu Jopia for allowing me early access to an online screener of their Christmas themed Horror/Thriller film, “Good Tidings”. Good Tidings is about Sam Baker (played by Alan Mulhall), a homeless ex-soldier with a troubled past, who spends his days helping others while continuing to guide those he’s already taken under his wing. While walking the streets on Christmas morning, Sam comes to the aid of a homeless man named Jon (Jonny Hirst), offering him refuge in a disused courthouse he and his followers are holed up in. It’s not long before Sam and his rather large collective find themselves trapped and in trouble. With the help of recovering drug addict and friend, Roxy (played by Claire Crossland) and happy couple, Paul and Mona O’Connor (Garry McMahon and Julia Walsh), Sam must find a way to stop three psychopaths in Santa outfits before they kill everyone. The film also stars Stu Jopia, Giovanni Gentile, Liam W. Ashcroft and Colin Murtagh. Good Tidings is Bedford’s debut feature-length film, having previously made four shorts.

Well I love Christmas themed films, everything and anything to do with that most wonderful time of the year. Whether it’s watching 8-year-old, Kevin McCallister fighting to protect his home in the Chris Columbus film, “Home Alone”, to Bob Clark’s, 70’s sorority house thriller, “Black Christmas” or even the lesser known Susan Montford thriller, “While She Was Out”, they’ve all got one thing in common, Christmas. Most people put on a happy family drama or comedy when it comes to celebrating the holidays but these days there’s a different type of holiday film for those who like to do things a little differently. The iconic slasher has made a name for itself with Christmas entries like the aforementioned “Black Christmas”, as well as the classic, “Silent Night Deadly Night”. I’ve been lucky enough to review several Holiday themed films over the years, Steven C Miller’s “Silent Night” and Austin Bosely’s low-budget romp, “Dismembering Christmas” are just a couple that come to mind. Bedford and Co (sounds like a stationary manufacturer right?) are bound to get you in the door with the eye-catching artwork and the promise of three mysterious Santa’s causing all kinds of hell. I can only imagine these lads (lads haha, look at me trying to ingratiate myself with the UK pub crowd) are inspired by these same sorts of films I speak of.

Good Tidings opens with some really great camera work, pulling focus from the front door of a house as a drunk man begins walking. Followed by a wide shot, via dolly, tracking him across his yard and over the fence-line towards his vehicle. You can’t help but be impressed when you see such a well thought out and executed approach to the very opening frames of what’s ultimately a low-budget indie slasher. All the camera work and framing is nicely presented, there’s a handful of memorable still shots. At one stage there’s a great shot from the trunk of a car, plus some suspenseful frames angled up, looking at one of the Santa’s through the perspex as two victims try their best to remain quiet. I think the best shot of the film is an effective rack focus on an old school gramophone as a character picks it up off the floor. The combination of good equipment and tight editing gives Good Tidings a higher production value look than you’d expect given the estimated budget. The audio levels are pretty clear when you take into consideration the reverb that would have bounced off the walls of the old courtroom during the shoot. The score is quite good and helps drive some of the suspense. They utilize some early Synth/bass along with Christmas bells and later repeat an off-kilter version of, “Carol Of The Bells” which is somewhat unnerving.

The writing in the opening act is very good, it gives you a bit of an understanding as to who the various characters are before shit hits the proverbial fan. You’ll come to learn some things about Sam and issues he’s had in the past, as well as seeing why he’s so well liked among the group of struggling people. He’s developed a close relationship with Roxy, acting as her rock and preventing her from falling back into old habits. It’s really the two of them that carry the drama, along with the motherly and fatherly, Mona and Paul. The performances are of a pretty high standard given the differing experience levels and the style of film. Mulhall as Sam, balances acceptance and redemption evenly and I think you see that change midway through the course of the film, he does a really good job. Claire gives Roxy plenty of fight but she conveys her dramatic stuff really well too, the pass the parcel sequence springs to mind (no spoilers). I thought the best performance came from Julia Walsh and she makes her character extremely sympathetic due to her range as an actress. She owns all of her emotional moments and really sells it well. Stu (I think it was), playing the most animated of the Santa’s, found a way to be consistently entertaining. In regard to the action, most, if not all the blood and gore effects, are practical. As every good slasher should (if you know your rules), there’s a well conceived kill in the opening minutes and it’s a graphic one. There’s a bit of a lull in the body count for the remainder of the first act but a couple of the kills in the middle portion of the film bring it back around.

This is one of the first times that I haven’t had any complaints with technical features, Bedford and his crew have done well to make this a really sharp-looking product. However, I was able to pick out a couple of continuity issues (or more accurately, questionable decision-making), they’re usually par for the course when it comes to the genre though. There’s a scene in which Roxy and Mona are able to temporarily overthrow one of the Santa’s by using his own weapon on him. Common sense would suggest you’d probably take the weapon with you encase you encounter one of the other two madmen, Right? Wrong, our not so bright girls drop the weapon instead. I can’t recall whether they run into another Santa straight away or not but regardless, that’s just a dumb thing to do and something none of us would ever do if put in that same situation. There’s another sequence amidst all the chaos of this invasion, in which Sam finds someone hiding (I don’t remember who) and the two begin very noisily discussing what they should be doing. If this was realistically portrayed everyone would have been in stealth mode and trying like hell to not make a peep but hey… it’s a movie.

The story begins primarily focused on Sam (which is where the film is its strongest) but when things start to escalate during the second act, there’s quite a lengthy period of time before the story revisits him again. After Sam discovers yet another body, the drama switches to the “hostage” situation playing out in the records office of the building. It lasts for what seems like an eternity, before showing Sam again in the same room he was in prior to the change. If there’s some inconsistencies in acting it comes from those playing very minor roles as secondary characters. The reactions to this frightening situation are either underplay or overplayed by most but to be fair, they don’t get much to work with dialogue-wise, which would be fine if their deaths were extravagant but they’re not. If there’s one key ingredient missing from Good Tidings it’s the higher body count we’ve come to expect from the “slasher”. A wide shot in the courtroom during the final stages, showcases a number of dead bodies of people we unfortunately never see die. More carnage can never be a bad thing but I also understand that films have budget constraints and other complications that don’t always allow for the extras.

I first heard about Good Tidings almost a year ago and ever since, I’ve been eagerly awaiting its release. The screenplay in which Bedford, Gentile and Jopia co-wrote, is an honest homage to the holiday themed, horror flicks of the 70’s and 80’s. I love the poster art and the look of our three deranged Santa’s. I was pleasantly surprised with the gorgeous cinematography, which includes several nice tracking shots and a lot of effective still shots and technique in regard to those. The audio track is consistent and the score is a solid balanced mix of synth/bass and Christmas themed music. There’s some good writing throughout the film and plenty of early exposition to help you get to know a few of the core characters, Sam and Roxy in particular. All the lead performances are very good but it’s Julia Walsh that gets the M.V.P (most valuable player). The lads give us a nice early kill, followed by a handful of other deaths that each utilize good quality practical effects. There’s a few plot holes in the decision-making by characters who are put in dire circumstances and the film plateaus somewhat when the narrative strays from being Sam-centric. The one thing hardcore slasher fans might be somewhat disappointed in (myself included) is the lacking body count in terms of on-screen kills but keep in mind this is Stuart’s first feature-length film and it’s a low-budget independent one at that. Good Tidings still offers up plenty of fun and it’s another entertaining and well-made film for the sub-genre. Keep an eye out for the official release this December!