First off I’d just like to say thank you to Hungarian filmmaker, Demeter Lorant for allowing me early access to an online screener of his 16 minute Horror short, “Lucky Girl”. Lucky Girl is about a trio of women who are involved in a car accident and aided (or at least they think) by a mystery man (played by Geza Benko). When the girls come to in the killer’s lair, they quickly realize their suffering is far from over. The film also stars Nikolett Dekany, Barbi Horvath and Nikoletta Mucha. On top of directing the film, Lorant also worked on the visual effects and the editing. I’m pleased that this latest exploitative inspired horror film comes out of Hungary, it’s officially the first film I’ve watched and reviewed from the country. I heard about Demeter’s film through DreadCentral, who are my usual go to source on anything horror related that I haven’t heard about prior. 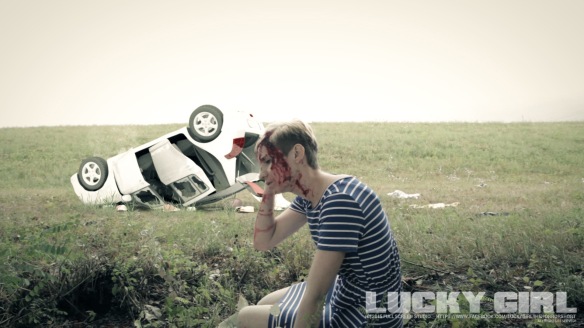 Lorant’s script is pretty straight forward and because it only runs 16 minutes, it doesn’t waste anytime getting to the thick of it. It’s a pretty in your face experience but without going over the top in on-screen ferocity. Right off the bat you know Benko’s character isn’t just looking to help innocents at the scene of an accident, he’s definitely hoping to take advantage of the unfortunate situation and he does. Laura Csonka, with Lorant’s direction, shot a great looking film. There’s a couple of early dolly shots which help to raise the production value and all the framing is consistent as well. The focus shots and close-ups inside the killer’s den look great. Lorant uses fade ins and fade outs perfectly, to parallel our trio of girls falling in out of consciousness while tied up. The sound is nice and loud but the lines of dialogue border on peaking out (there’s only one or two though). The score could have been more dominant, however, I enjoyed the heavy use of bass and addition of what sounded like keys. A film this violent in nature should have plenty of the red stuff but Lucky Girl doesn’t actually have a lot. Most of it’s pretty simple blood and not much prosthetic work but regardless, I liked the practical stuff.

From a technical point of view, the color saturation in the external scenes is rather harsh and could have been lightened up. As I said, I enjoyed the practical effects but on two different occasions they opted to use some poorly presented, CG blood spurts and that takes a little away from the quality consistency, There’s a lack of attention to detail in the makeup on our three actresses as well. They should have given them more of a battered and bruised look, after all, they had just been in what looked like a pretty nasty accident, they’d be better banged up than that. There’s no real bruises or scratches other than a couple of gashes here and there (as can be seen in the above screenshot). The standard of acting seemed alright but hard to get a read on, due to the lack of dialogue. My main criticism is that none of them ever seemed to struggle or put up a fight. You’d be kicking and screaming in that situation, especially once you’ve regained consciousness and got your bearings. The audience really needs that scene in order to feel like these girls are truly scared. On top of that, one of the girls manages to rescue another and has a chance to better her own outcome by grabbing a weapon but chooses not to, stupid and unrealistic. Viewers should be aware that there’s sexual assault depicted here, although it’s only partially in the frame, there’s no nudity or visual contact. I didn’t like it (I mean no one ever likes it but in this case it didn’t feel like it was needed). I wasn’t really satisfied with the ending of the short either. The resolution itself was fine but I hoped it would play out with a more fitting visceral release.

Lucky Girl is my first Hungarian, Horror experience and a solid one at that. The film is shot really nicely, particularly the scenes inside The Killer’s lair. The audio levels are loud, almost a little too loud and the score uses bass to pretty good effect. It’s a dark and bleak 16 minutes and Lorant sets it all up with some decent practical effects. The color grading could have been a bit better and the CG blood work looks mediocre, with not a lot of detail in the makeup either. The assault sequence isn’t graphic in nature but disturbing all the same and this could have worked without it. The acting was fine but more of a realistic struggle was required from all three of the girls, just for plausibility sake. Some of the finer points of the writing, including the ending, could have been improved and taken in a different direction. Lucky Girl is still worth your time though, especially if you’re a fan of exploitative horror because you know what you’re in for. I look forward to seeing future works from Demeter, keep an eye out for this one it’s coming soon!