This is a review for the 2013 Biography/Drama “Fruitvale Station”, Written and Directed by Ryan Coogler. Fruitvale Station tells the story of Oscar Grant (played by Michael B. Jordan), a 22-year-old black man living in Los Angeles with his girlfriend, Sophina (Melonie Diaz) and their daughter, Tatiana (Ariana Neal). During the course of the last day of 2008, Oscar crosses paths with strangers, friends, family and enemies as he looks to ring in the new year. The film also stars Octavia Spencer, Kevin Durand and Chad Michael Murray.

When Fruitvale Station came out I remember hearing nothing but good things about it, somehow I just never got around to seeing it. Over the course of my time spent networking, I might have seen an odd article or two posted online about the true events depicted in the film but I had no real knowledge of what transpired in Grant’s life or that final day of 2008. Coogler’s script essentially focuses on depicting a day in the life of Oscar Grant. The film only runs 85 minutes, and while other times in his life are covered, most of the film centers on this one particular day. Things haven’t necessarily gone to plan for Oscar and it’s quite apparent that he’s been down the wrong path more than once before. On the eve of a new year, he aims to get his old job back, do right by his mum, Wanda (played by Spencer), whose birthday coincidentally falls of New Years Day, and lastly, to take care of his girlfriend and daughter. Fruitvale Station is very much guerilla film making, it’s very personally shot, with most scenes displaying extreme closeups as we follow Oscar as he goes about his day. There’s very little distance between the viewer and subject. The camera is constantly following his movements, and that of course makes for some effective continuous sequences. If the shooting style doesn’t help you to connect then Oscar’s escalating stress levels, exhibited through a valuable bass orientated score, are bound to.

Fruitvale Station is definitely all about performance and each of the cast members bought their A-game in that regard. I recognized Jordan from “Chronicle” and “Hardball” and realized I’d seen him in a bunch of other film and TV productions over the years. He delivers a career best performance here and manages to strip Oscar all the way back in order to portray him as sincerely as possible. Oscar’s heart seems in the right place but he’s struggling to pick an avenue, almost as if he’s waiting for life to happen to him instead of taking initiative. The moments he shares with 4-year-old daughter, Tatiana are precious. They give us insight into how he carries himself as a father, even if he’s not able to provide financially. Diaz’s, Sophina is an interesting character as well. She’s got some of that Latino fire in her belly and I think she keeps Oscar in check, as is evident in the beginning of the film when we find out that he’s clearly abused her trust in the past. Then there’s Tatiana, this was young Ariana’s first time acting and she comes across as very natural, especially for a child actress. The dynamic between her and Jordan feels genuine and it’s where the heart of the film lies. I particularly like the inclusions of Kevin Durand (of Smokin’ Aces) and Chad Michael Murray (TV’S, One Tree Hill) as Officers, Caruso and Ingram. They have attitude, you don’t quite know how to take them and I’d imagine that’s how Grant and his friends probably felt. I think the standout scene in the film was one shared during a prison visitation between Oscar and Wanda. Octavia shows us why she’s an Oscar-winning Actress and Michael gets to unleash some raw emotion.

Some of the dialogue is mumbled at times and is difficult to make out, though I’m sure that’s probably part of the vernacular. I wasn’t a fan of the way the film presents Grants contacts or his association to them. Doing so via names of friends and family popping up on the screen every time he makes a phone call or sends a message. It seemed detached and unnecessary considering most viewers will be able to read between the lines, that or who he’s talking to is eventually revealed through the dialogue anyway. From the outset of Fruitvale Station, Oscar definitely appears to be feeling the effects of his past actions but I would’ve liked to have seen him exhausting all resources before simply accepting his lot in life. He pushes hard to gain re-employment with the market he was recently fired from, though we never see him pursuing any other jobs or opportunities, nor is it divulged through the dialogue that he’s even looked for anything else. On that fateful day he crosses paths with an old enemy and inmate from the same facility he was previously incarcerated in. In a city of I don’t know how many million (20?), what are the odds that he would run into said guy on that day, or that it would lead to the events of that night. I don’t know the specifics of the actual event, so maybe that did happen but it does seems unlikely and convenient with how things unfold in the film’s climax.

What took place on December 31st, 2008 was a shocking tragedy, though I can’t help but think Oscar and he’s friends didn’t do themselves any favors getting vocal with the local authorities. They’re feeling provoked and edgy after not having done anything wrong and I understand that, but I make it a rule not to poke the bear, don’t make matters worse than they already are (though it’s easy for me to say being a white man). I do think the officers were under utilized in the film but that may have been requested by whoever the powers that be were (and of course their names were changed). We don’t get any exposition on Caruso or Ingram, no scenes depicting their lives the day of the incident. It’s easier to just pigeonhole them as racists abusing their power when only they truly know whether it was intent or a simple mistake that was made that night. I think a more balanced look at both parties may have allowed viewers to formulate a better opinion on what transpired. All I know is that Oscar Grant didn’t seem like a bad kid and that’s what’s saddening. 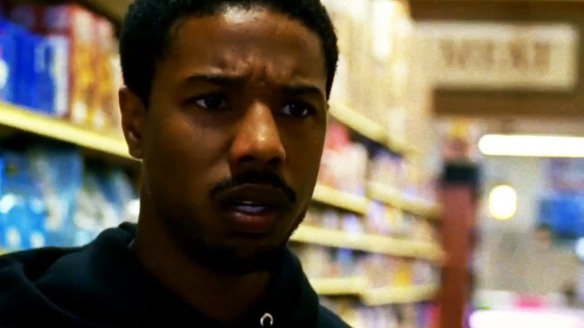 Fruitvale Station is pretty powerful stuff and even more so because it’s based on true events. Coogler’s in your face shooting style helps to put the audience in Oscar’s shoes in a way that makes him relatable, without resorting to emotional manipulation. The pacing is good and the performances are where the film is strongest, particularly those interactions between Oscar and his daughter as well as those scenes with Wanda. There’s some real footage shown at the beginning of the film and some more towards the end, it’s blurry phone footage but quite difficult to watch all the same. I didn’t necessarily like all the specifics in the writing and Coogler didn’t fully capitalize on the lengths Oscar may have gone to in order to improve his life. A more extensive look at the lives of the officers would have been a welcomed inclusion too. In the end, Fruitvale Station is well deserving of its accolades and although tragic in nature, this is an important story and it should be seen by all.